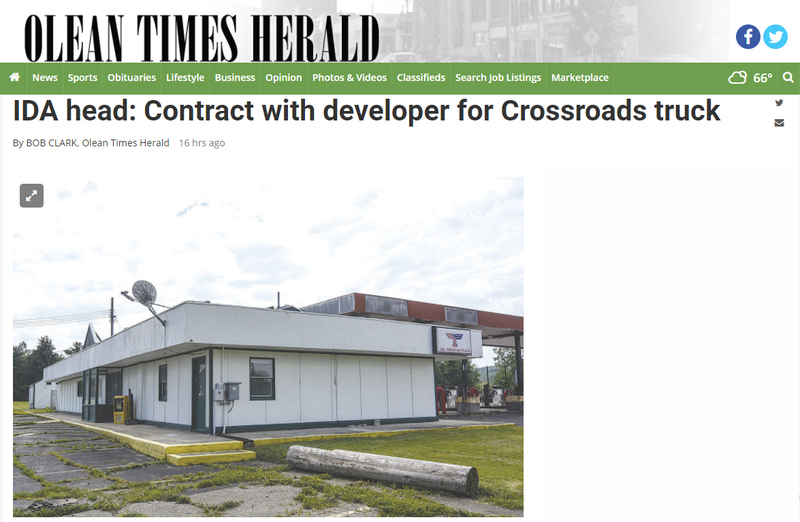 The former All American Plaza has been vacant for almost a decade, but officials hope a new agreement with an undisclosed developer will put a 100-bed hotel and conference center on the site as early as 2019.

Allegany County officials announced that on Wednesday an agreement was signed with an undisclosed developer to build a hotel, conference center and other businesses at the Interstate 86 Exit 30.

“We will be meeting with a developer and working out a press release, but we don’t want to give out too many details yet,” Clark said, but said the first phase would likely include “a hotel at the Hampton Inn or Marriott level, a national restaurant, reopening the gas at the truck stop and a conference center.”

The committee then entered an executive session claiming attorney-client discussions to hear details on the project.

“We announced things too soon before,” Clark said. “I’m an optimist, but a quiet optimist.”

After the meeting, Clark said the project is expected to be more successful than an abortive attempt made in 2012.

At that time, a signed letter of intent was drafted with Rochester-based EB-5 New York State Regional Center and negotiations to put a Holiday Inn Express on the site, along with a restaurant, conference center and gas station. The estimated price tag of that project through phases was set at $25 million, and officials expected a 2013 construction date. That project attempted to attract overseas investors who, under the federal EB-5 program, would receive permanent resident status in the U.S. in exchange for a $500,000 investment in a rural, impoverished area like Belvidere.

Clark said there are several reasons he expects the project to be successful now.

“These developers have a pretty strong track record in the Rochester area, and they sought us out, we didn’t seek them out,” Clark told the Times Herald after the meeting.

Clark also noted that the 2012 agreement was set before the IDA and other agencies launched a study on hotel room demand in the county, and the first agreement was based on just passing traffic on Interstate 86.

“We really utilized the three colleges and their needs,” Clark said.

In the study, officials figured that a 100-bed hotel at the site could realistically see a 60-percent occupancy rate every day, with sell-outs expected multiple times throughout the year. At a rate between $115 and $130 a year — which IDA officials said would be an acceptable rate for a hotel at the site and similar in price to Microtel in Wellsville — a hotel there could make around $3 million annually, with around $120,000 in bed taxes paid to the county.

The demand includes special events like the Great Wellsville Balloon Rally, but the demand on the county's roughly 200 existing hotel beds stretches far beyond events. Corporate entities like Saputo, which owns Friendship Dairies on Route 20, often need accommodations for visitors from out of town, with officials reporting the firm sees about 200 visitor-days a year.

A key component will be a water line from Friendship to the site, which was originally to be funded with a $3.5 million bond purchased from the IDA by the county with surplus funds in February 2012.