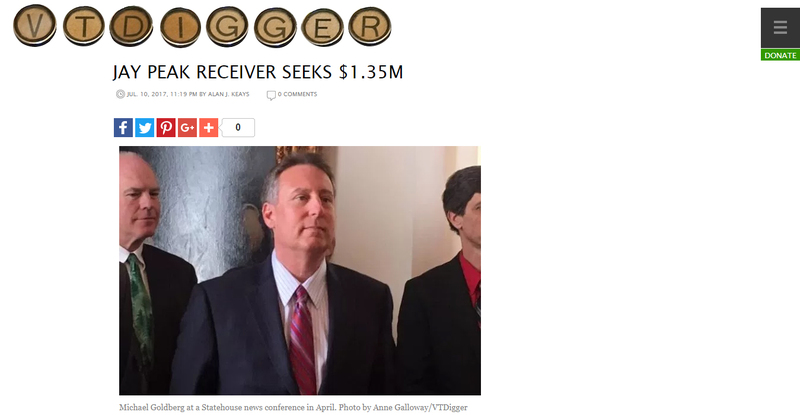 Lawyers with a stake in the massive fraud case involving Northeast Kingdom projects have revised their proposal for divvying up $25 million in settlement proceeds after a judge raised concerns that the first plan had a big omission.

The group of attorneys will set aside about $1.35 million to cover six months’ worth of expenses for the court-appointed receiver overseeing the properties at the heart of the alleged “Ponzi-like” scheme.

Initially, the attorneys representing investors had sought to divvy up the $25 million among themselves. However, after federal Judge Darrin P. Gayles pointed out that none of the receiver’s legal bills were covered, the latest proposal does just that.

“All participating firms” have agreed to “voluntarily contribute” enough to cover the receiver’s second fee application if their latest proposal is approved, says a filing submitted Monday on the receiver’s behalf.

That brings the total renumeration so far to $3.3 million for Michael Goldberg, the court-appointed receiver, and his firm, Akerman LLP.

The latest proposal is included in a flurry of filings in recent days dealing with payments to attorneys in the EB-5 immigrant investor case involving Jay Peak owner Ariel Quiros and his business partner, Bill Stenger, the resort’s former CEO and president.

Goldberg has overseen operations at the properties, including Jay Peak and Burke Mountain ski resorts, for more than a year.

On Friday an attorney for the receiver asked Judge Gayles to approve $1.35 million to pay for legal and other professional services expenses for the receivership spanning Nov. 1 to April 30.

In December, the judge approved using money from the receivership to pay about $1.95 million in legal and professional expenses accrued since Goldberg was appointed to his role in April 2016. That fee request included expenses from April 1, 2016, through Oct. 31.

The money to cover those bills came from assets within the receivership itself, specifically from a share of a $13.3 million settlement between the receiver and Citibank, a financial institution Quiros had used to take out a line of credit.

As part of that settlement, a $25 million fund had been set up to pay attorneys who had represented investors in actions against Raymond James in exchange for dropping their cases. The settlement included a bar order, which protected Raymond James from fraud litigation by investors.

The $25 million fund, according to court filings, also “obviates” the need for investors to compensate attorneys themselves.

A breakdown of the legal and professional expenses for the receivership from Nov. 1 to April 30 includes:

For example, the latest filing states, Goldberg and his firm, Akerman, agreed to reduce his billing rate and the rates of his professionals.

Instead of their standard rates, according to the filing, which range from $440 to $7,250, per hour all partners are billed at $395; associate rates are capped at $260; and paraprofessionals are billed at $175, resulting in a blended rate of $320.

In addition to the rate reduction, the filing says, all time billed to long distance travel is reduced by an additional 50 percent.

“These discounts,” according to the filing, “equate to a $310,000 reduction from Akerman’s standard billing.”

A federal judge appointed Goldberg to the post of receiver when the U.S. Securities and Exchange Commission sued Quiros and Stenger in April 2016, accusing them of investor fraud.

The latest filings provide a hint that more settlements, in addition to the ones with Raymond James and Citibank, may be coming.

“The Receiver continues to review potential causes of action against the principals of the Receivership Defendants and various third parties. These claims may include common law claims and claims under fraudulent transfer statutes,” one of the motions filed Monday says.

“While the Receiver cannot yet predict the likelihood, amount or cost-effectiveness of particular claims or the claims as a whole, the Receiver continues to diligently evaluate claims against third parties.”