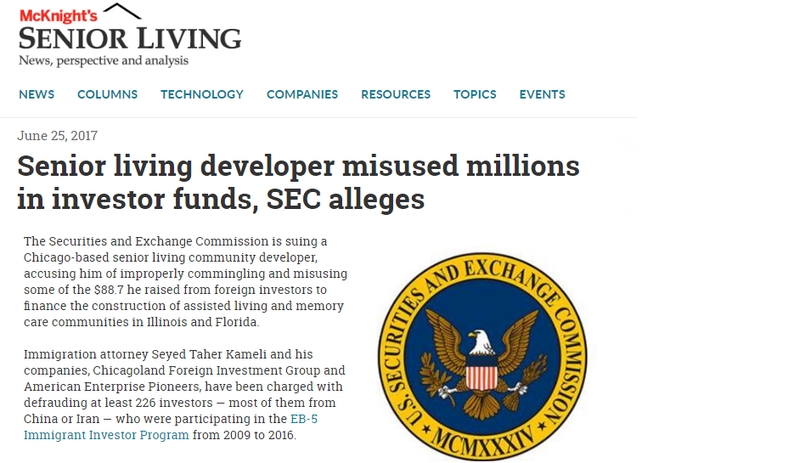 The Securities and Exchange Commission is suing a Chicago-based senior living community developer, accusing him of improperly commingling and misusing some of the $88.7 he raised from foreign investors to finance the construction of assisted living and memory care communities in Illinois and Florida.

Immigration attorney Seyed Taher Kameli and his companies, Chicagoland Foreign Investment Group and American Enterprise Pioneers, have been charged with defrauding at least 226 investors — most of them from China or Iran — who were participating in the EB-5 Immigrant Investor Program from 2009 to 2016.

In a complaint filed Thursday, the SEC alleges that Kameli and his companies falsely claimed that each investor's $500,000 would be used to help construct a specific assisted living or memory care project and create at least 10 permanent full-time jobs within that project, thus qualifying each investor for a potential path to permanent U.S. residency through the EB-5 program.

Rather than use investor funds solely for the senior living project for which an investor was solicited, however, Kameli diverted millions of dollars to fund other projects and to make unrelated payments, the SEC alleges, a practice that was contrary to representations to investors and to the requirements of the EB-5 program. Kameli also allegedly spent a significant portion of investor proceeds for the benefit of himself, his brother and his companies.

Kameli and his companies sought investors for four communities in Illinois and four in Florida, according to the SEC. Only one community, Bright Oaks of Aurora in Aurora, IL, has been completed, although 48 of its 60 units remain unoccupied, the SEC said.

Communities in Elgin and Fox Lake, IL, are partially constructed, the SEC said, but construction has not begun on communities in West Dundee, IL, or in Ft. Myers, Juniper, Naples and Wildwood, FL.

The SEC's complaint, filed in U.S. District Court for the Northern District of Illinois, seeks a temporary restraining order and preliminary, permanent and conduct-based injunctions as well as the disgorgement of ill-gotten gains. The SEC is also seeking a court-ordered asset freeze and appointment of a receiver over some of the companies involved in the alleged fraud.

A voicemail message was left for Kameli was not returned by McKnight's Senior Living's publication deadline.