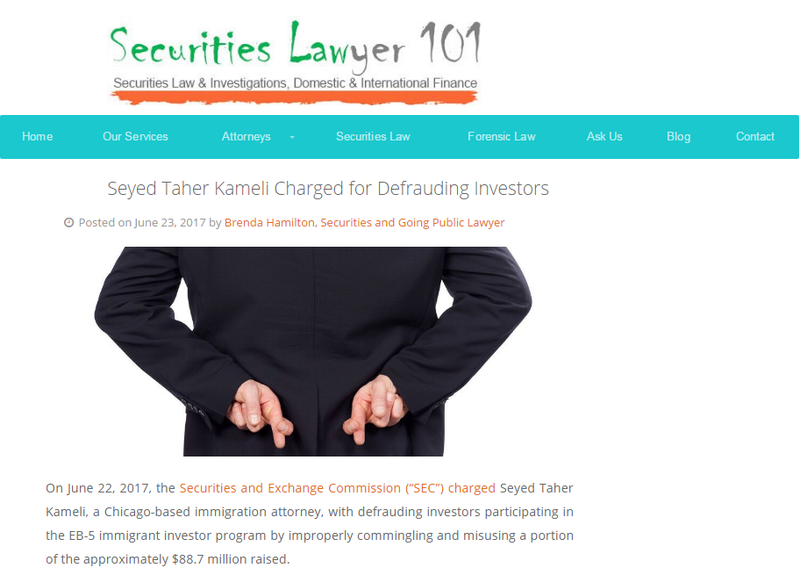 On June 22, 2017, the Securities and Exchange Commission (“SEC”) charged Seyed Taher Kameli, a Chicago-based immigration attorney, with defrauding investors participating in the EB-5 immigrant investor program by improperly commingling and misusing a portion of the approximately $88.7 million raised.

The SEC alleges that Seyed Taher Kameli and his companies, Chicagoland Foreign Investment Group, LLC and American Enterprise Pioneers, Inc., falsely claimed to at least 226 foreign investors that each of their $500,000 investments would be used to help construct a specific senior living project in the Chicago area or Florida and create at least 10 permanent full-time jobs within that project. This would qualify each investor for a potential path to permanent U.S. residency through the EB-5 program.According to the SEC’s complaint, rather than use investor funds solely for the senior living project for which an investor was solicited, Kameli diverted millions of dollars to fund other projects and to make unrelated payments, which was contrary to representations to investors and the requirements of the EB-5 Program. Seyed Taher Kameli also spent a significant portion of investor proceeds for his own benefit, for his brother’s benefit, and for the benefit of companies he owns.

The SEC’s complaint, filed in U.S. District Court for the Northern District of Illinois, charges Seyed Taher Kameli, Chicagoland Foreign Investment Group, LLC, and American Enterprise Pioneers, Inc. with violations of Section 17(a) of the Securities Act of 1933 and Section 10(b) of the Securities Exchange Act of 1934 and Rule 10b-5 thereunder and Seyed Taher Kameli for liability under Section 20(a) of the Exchange Act as a control person of the entity defendants. The SEC’s complaint seeks a temporary restraining order and preliminary, permanent, and conduct-based injunctions as well as disgorgement of ill-gotten gains plus prejudgment interest, and penalties. The SEC is also seeking a court ordered asset freeze and appointment of a receiver over certain of the companies involved in the alleged fraud.