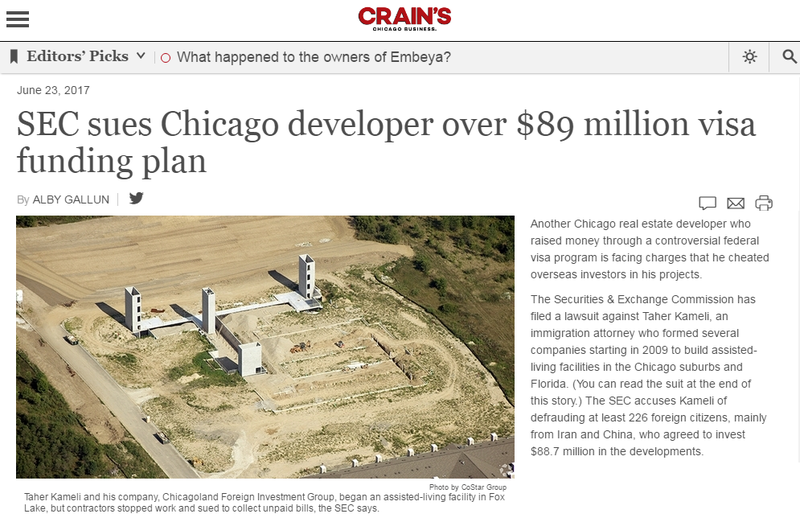 Another Chicago real estate developer who raised money through a controversial federal visa program is facing charges that he cheated overseas investors in his projects.

The Securities & Exchange Commission has filed a lawsuit against Taher Kameli, an immigration attorney who formed several companies starting in 2009 to build assisted-living facilities in the Chicago suburbs and Florida. (You can read the suit at the end of this story.) The SEC accuses Kameli of defrauding at least 226 foreign citizens, mainly from Iran and China, who agreed to invest $88.7 million in the developments.

Kameli raised the money through the EB-5 visa program, which allows foreigners to become U.S. residents if they invest at least $500,000 in qualified business ventures, like real estate developments. The program has many critics, who contend that it's vulnerable to fraud and is used mainly by developers of luxury projects that don't need the financing.

In March, a developer who planned a 995-room hotel project near O'Hare International Airport was sentenced to three years in prison after pleading guilty to charges that he swindled 290 Chinese citizens who invested in the development through the program.

Kameli and his company, Chicagoland Foreign Investment Group, solicited overseas investors through the EB-5 program for assisted-living projects and memory-care facilities for dementia patients in Aurora, Elgin, Fox Lake and West Dundee, and in the Florida cities of Naples, Fort Meyers, Wildwood and Sun City, according to the lawsuit, which the SEC filed yesterday in U.S. District Court in Chicago.

So far, the only project that's been completed in Florida or Illinois is Bright Oaks of Aurora, a 60-unit facility in the west suburb that opened earlier this year and has 12 residents, according to the complaint. Contractors hired to build the Elgin and Fox Lake projects have stopped work and sued to collect $3.7 million in unpaid bills, the SEC says in its suit.

Kameli and his attorney did not return phone calls.

As an immigration attorney, Kameli is usually on the other side of lawsuits with the federal government: In January, he sued President Donald Trump over his controversial executive order restricting travel from seven Muslim-majority nations.

The SEC alleges Kameli defrauded investors by commingling funds—using money for a project funded by one group of investors, for instance, to pay bills for a project funded by a different group—and using his investors' money for unauthorized purposes. In one case, he improperly transferred $575,000 from the West Dundee and Fox Lake developments to the Aurora project, using the money to cover electrical, carpentry and other subcontractors, the suit alleges.

The SEC also alleges Kameli skimmed money from land purchases, allowing him to pocket more than $1 million in undisclosed profits. In Wildwood, Fla., for instance, a venture he controlled paid $664,850 for two parcels where Kameli planed a senior living facility, the complaint says. But when he flipped the properties to a development venture financed with EB-5 money, he marked the price up to $1 million, generating a $335,000 profit for himself, according to the SEC.

Kameli also charged investor-funded projects fees that were not disclosed to EB-5 investors, according to the SEC. From 2010 to 2016, five projects paid two Kameli companies a combined $4.1 million in fees, part of "a fraudulent scheme to obtain undisclosed compensation," the suit says.

The SEC has asked a judge to freeze assets associated with the projects and appoint a receiver to take control of Kameli's companies.