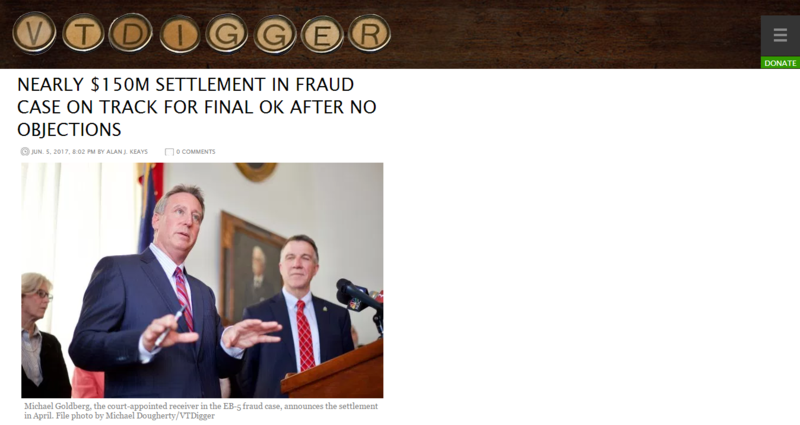 A proposed nearly $150 million settlement by an investment firm over its alleged role in a “Ponzi-like” scheme to defraud investors of millions in projects at Jay Peak and elsewhere in the Northeast Kingdom has cleared a major hurdle.

The deadline was Monday for anyone to file objections to the settlement the financial services company Raymond James agreed to with the court-appointed receiver overseeing the properties at the center of the fraud case.

No objections were listed as having been filed by the federal court by 5 p.m. Monday. The stage now appears set for District Judge Darrin P. Gayles to formally approve the settlement. Last month the judge gave the agreement his initial approval, pending any objections.

Had any objections been filed, the judge said he would have held a hearing June 30 to air the arguments against the settlement.

Any person failing to file an objection by the June 5 deadline, Gayles wrote in his earlier order, “shall be forever barred from raising such objection in this action or any other action or proceeding, subject to the discretion of this Court.”

Interested parties in the settlement included investors as well as contractors and business owners who were out money in the projects spearheaded by Ariel Quiros, Jay Peak’s owner, and Bill Stenger, the resort’s former CEO and president. State and federal regulators leveled fraud charges against the two men last spring. 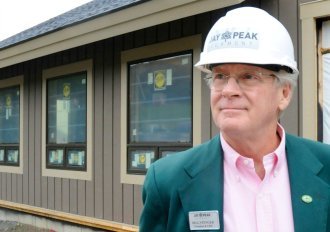 Bill Stenger outside the Stateside Hotel at Jay Peak in September 2013. ​

Regulators say the developers used investor money to buy Jay Peak, in one of many transactions facilitated by Raymond James, a St. Petersburg, Florida-based firm.

Settlement proceeds are targeted at paying contractors and businesses back the millions they are owed for services performed for the developers. Also, investors who regulators say were the victims of fraud stand to gain from the settlement, with money going to help pay to finish incomplete projects, reduce debts on assets and, in some cases, allow them to recoup lost investments.

Many of those investors, who were foreigners seeking permanent U.S. residency through the federal EB-5 visa program, were left with their immigration status in peril as a result of the alleged fraud.

That’s because job creation requirements tied to those investments under the EB-5 program had not been reached.

A lead attorney in a proposed class-action lawsuit brought by investors against several parties, including Quiros, Stenger and Raymond James, said after the proposed settlement was announced last month that he didn’t expect his clients would object.

“We’ve discussed it with our clients,” Harley Tropin, a Florida attorney, said at that time. “It’s a great deal, and we think all the investors will be benefited by it, they’ll all be favor of it.”

That lawsuit, according court records, was filed on behalf of a proposed class of all 836 people who together invested more than $400 million in the series of projects headed by Quiros and Stenger in northern Vermont as part of the EB-5 immigrant investor program.

Curtis Carlson, a Florida attorney representing a group of 33 Chinese investors who decided against joining the proposed class-action case, said Monday his clients would not be objecting to the Raymond James settlement.

“I checked with all my clients, and my clients are all OK with the settlement,” Carlson said. “Everybody is getting something here.”

Michael Goldberg, the court-appointed receiver, announced the settlement with Raymond James and Associates Inc. at a news conference at the Statehouse in April.

“We believe this resolution is fair and representative of our commitment to redressing the victims’ losses in this case,” Jonathan Santelli, Raymond James executive vice president and general counsel, said in a statement when the settlement was announced.

The settlement, if ultimately approved, releases claims against Raymond James, with the financial services firm admitting no wrongdoing. 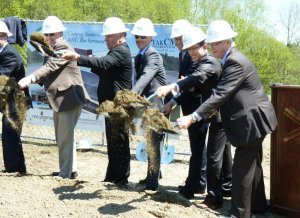 Goldberg had alleged in a lawsuit against Raymond James that the firm “aided and abetted” Quiros in a “Ponzi-like” scheme in which he misused $200 million in investor funds, including “looting” more than $50 million.

The settlement provides about $80 million to EB-5 investors, with the largest chunk going to those who put money into a failed project to build a biomedical research facility in Newport.

That project, AnC Bio Vermont, was termed by the U.S. Securities and Exchange Commission “nearly a complete fraud.”

If Judge Gayles signs off on the settlement, Raymond James will pay the receiver $145.5 million. Combined with $4.5 million Raymond James paid in an earlier agreement with state regulators, that brings the total settlement figure to $150 million.

Most investors in projects at Jay Peak will not get an immediate financial benefit from the settlement, because six of those developments, or phases, were built and are operating.

Investors in Jay Peak’s Tram Haus Lodge, who held promissory notes, will be paid in full with funds from the settlement.

Those investors who do not get immediate funds from the settlement, however, do benefit from the elimination of debts associated with projects they invested in. With debts such as money owed to businesses and contractors paid off, the investors can sell the properties free and clear and benefit from the proceeds.