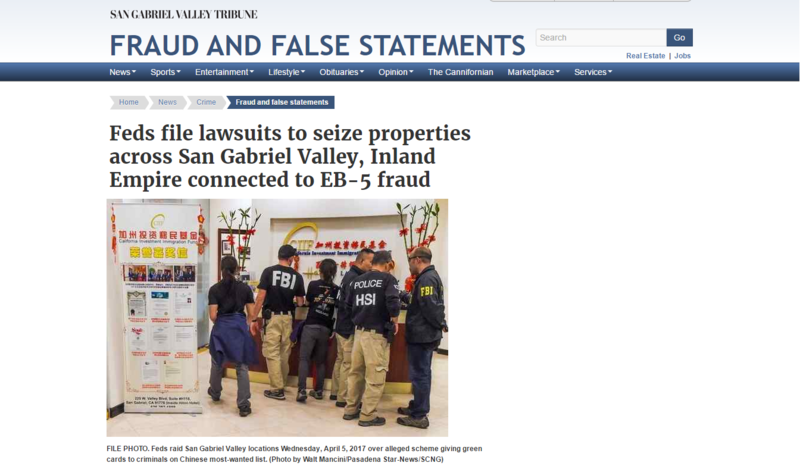 No criminal charges have been filed in connection with the ongoing probe, but the lawsuits contend the two targets of the investigation “exploited” the EB-5 visa program, which offers legal permanent residence in the United States for foreign nationals who make job-creating investments of $500,000 or more in U.S. companies.

The asset forfeiture complaints allege that the California Investment Immigration Fund, owned and operated by attorney Victoria Chan and her father, Tat Chan, wooed Chinese investors to give a minimum of $500,000 intended to help build job-creating businesses in return for permanent U.S. residency through the EB-5 visa program.

However, once the Chans received the money, they either refunded it to the investors or stole it “to use for personal expenditures, including buying million-dollar homes,” according to the lawsuits.

In April, agents from the FBI and the U.S. Department of Homeland Security raided the CIIF office, located in a commercial space within the Hilton San Gabriel Hotel on Valley Boulevard, and their personal residences in Arcadia and South El Monte, taking away dozens of boxes filled with documents.

Neither Victoria nor Tat Chan were arrested or charged with any crimes at the time of the raids, said FBI spokeswoman Laura Eimiller. Investigation into the EB-5 fraud scheme is ongoing, said Thom Mrozek, spokesman for the U.S. Attorney’s Office, in a statement.

On Friday, four of the investors who claim their money was stolen filed a civil lawsuit against the Chans, Tat Chan’s wife Zheng Chan and business partner Fang Zhen in an effort to recover their investments.

Lawyer Jing Wang said her clients’ temporary green cards are set to expire in November and that they would gladly re-invest their money and retain residency if they could recover it.