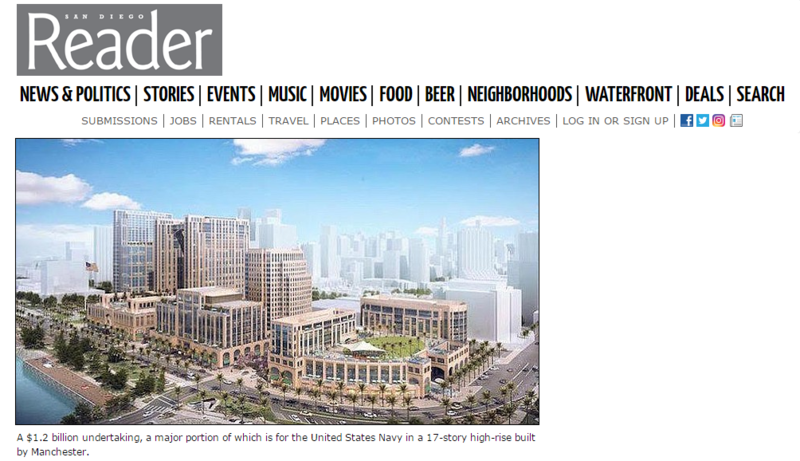 It's been a decade-long slog for mega-millionaire developer and onetime Union-Tribune publisher Doug Manchester's controversial Navy Broadway complex at the foot of Broadway.

Project foes vowed that it would never get built, citing its forbidding bulk and potential as a target for terrorism along a busy waterfront in the midst of downtown's high-end business and residential district. Coming up with sufficient cash to build out the grandiose project also remained dicey.

But last December, a federal appeals court finally gave what appeared to be the final green light for the $1.2 billion undertaking, a major portion of which is set to house the United States Navy’s Region Southwest nerve center in a 17-story high-rise to be built by Manchester.

Under the terms of a 99-year lease with the government, the rest of the prime 12-acre parcel is to be developed for hotels, office towers, and retail.

Last month, as the ex-U-T owner began demolition for the project, now known as Manchester Pacific Gateway, manager Perry Dealy told the U-T that "there should be an announcement in the next 60 to 90 days that all financing is in order."

Now a flashy website is featuring the project to market the sale of so-called EB-5 visas, the same controversial funding mechanism recently pitched to wealthy Chinese by Nicole Meyer, sister of Jared Kushner, the son-in-law of President Donald Trump.

Manchester, said to be a candidate for ambassador to the Bahamas, has been a major Trump contributor, and gave $1 million to help bankroll the president’s inaugural festivities.

Under current EB-5 rules, non-U.S. citizens who come up with a $1 million investment can get green cards for themselves, their spouses, and unmarried children under 21, according to a May 8 L.A. Times account. In Kushner's case, the paper reports, the foreign capital is being sought for a New Jersey luxury apartment deal.

The president and CEO of EB5 is identified as Robert Dziubla. "Previously, he was the Vice-Chairman and General Counsel of Guggenheim Sovereign LLC, a joint venture with Guggenheim Partners, a $170 billion global financial services firm. From 1998 to 2003 he was the CEO and Chief Investment Officer of a private equity fund in Southeast Asia with several operating subsidiaries and over 1300 employees operating four resorts, fifty-five industrial properties and a portfolio of condominiums and serviced apartments."

"The principals of EB5 Impact Capital have handled many of the top real estate projects in the United States as shown below," says the website, over a gallery of photographs including those of downtown's Manchester Grand Hyatt, the Grand del Mar Resort, and the proposed Manchester Pacific Gateway Navy project.

"We secure a stable return for our investor in EB-5 qualified businesses, while maximizing profit potential for our business partners and EB-5 investors," according to the website.

It isn’t the first time Manchester has been associated with EB-5 visas. In June 2013, Don Bauder reported here that the developer's son, also named Douglas, went to China to promote the $350 million Fairmont Austin Hotel then being built in Austin. The project was subsequently financed by Thomas Barrack, Jr., a super-rich Santa Monica-based Manchester associate who later joined him in backing Trump's presidential bid.

How long the door will remain open for the well-heeled overseas visa-seekers may depend on which direction the political winds blow in Washington.

On the heels of the Kushner controversy, Sen. Dianne Feinstein called May 8 for shutting down the program, saying it was “crystal clear that the EB-5 regional center program presents a stark conflict of interest for the Trump White House,” per a Roll Call account.