The Return of Pabst Brewing 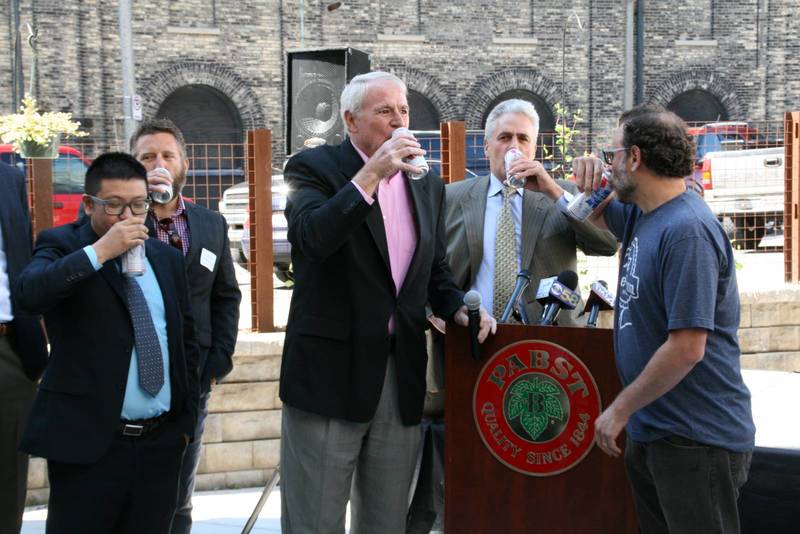 The city's famed beer maker, long absent from Milwaukee, will return to the Pabst Brewery complex.

In an event that had politicians drinking beer before noon, the owners of Pabst Brewing Company announced they’re coming home. The brewing giant will open a micro brewery in the church that was long part of the Pabst Brewery complex on the northwest edge of Downtown.

The company, which is infamous for how it closed the Milwaukee brewery in 1996 without warning one day, has new owners who are set to right the wrong. Chairman and CEO Eugene Kashper said this is the first step in becoming a good citizen and becoming part of the community. Kashper was effusive in his praise for others who helped make this a reality, noting that “from the first time I got here, it felt like home.” He added that “people are waiting for us to do the right, to make better beer and to give back to the community.”

Now the largest American-owned brewery, Pabst will be opening a small brewery in the former First German Methodist Church. The church, which sits at 1037 W. Juneau Ave., just above Interstate 43, was acquired by Pabst in 1898 and used for years as an employee training center and employee restaurant. It’s the second-oldest building still standing in the Pabst complex, having been completed in 1872. The Victorian Gothic building is historically designated by the city as part of a historic district that includes all of the former brewery. 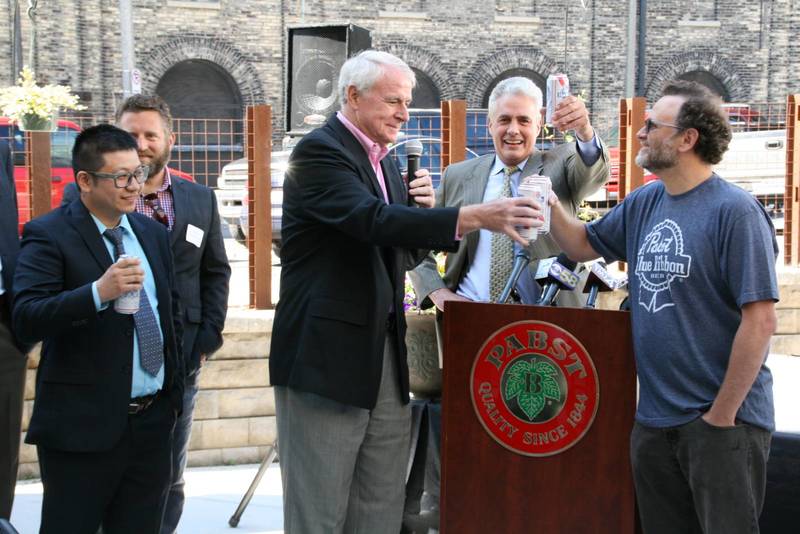 The new brewery will be developed by Blue Ribbon Management, who will buy the building from Zilber Ltd. and convert it into a micro-brewery, tasting room and restaurant. Local bar owner and restaurateur Mike Eitel will operate the restaurant portion of the business to be located on the building’s mezzanine level. The brewery is expected to brew 2,000 barrels once it’s up and running, with the capacity to eventually brew 10,000 barrels a year from the facility, according to event emcee and longtime Joseph Zilber consigliere Mike Mervis.

The new brewery is planned to open in the summer of 2016. Mervis said that Blue Ribbon Management, will start pulling permits in “30 to 45 days.” The project costs are currently estimated at between $3 and $5 million.  The building renovation and addition are being designed by a team at Engberg Anderson architects.

Mayor Tom Barrett was effusive not only in his praise for Pabst, but for the development team at Zilber Ltd. Coming to the press conference in a state that Mervis described as “slightly battered and scarred from the arena wars,” Barrett declared of Pabst that “The prodigal son has returned and we welcome you with open arms. This is a love affair that started in 1844, we had a break, but we’re back.” The mayor revealed that when he was a member of Congress he stood outside the brewery to protest its closing. He went on to note that when the massive brewery closed it became so desolate that “even the bad guys didn’t come here.” 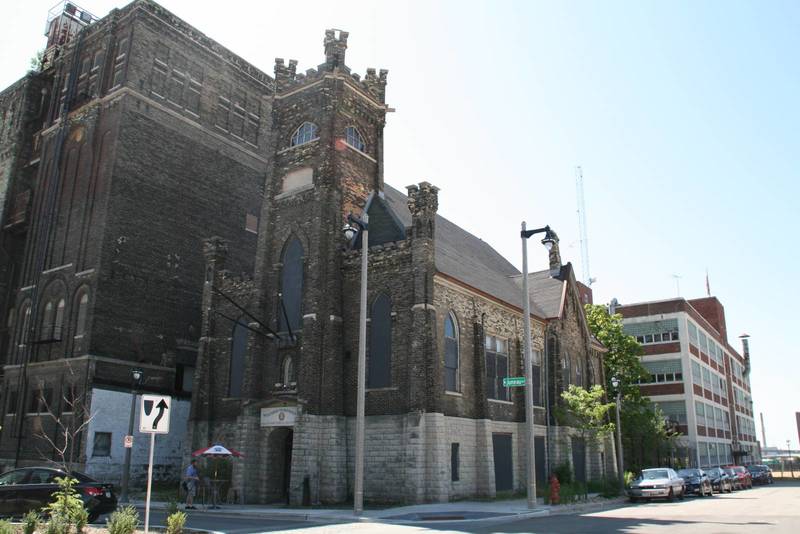 Ying Chan, president of project developer Blue Ribbon Management, remarked during his speech that “this is how Chinese people know Milwaukee.” He was holding a bottle of Pabst in his hand, with the word Milwaukee written in Chinese on it. Chan’s firm has developed a number of projects at The Brewery including the Brewhouse Inn & Suites and the Pabst Professional Center office building. The firm specializes in raising funds via the EB-5 program, which allows foreign nationals to receive green cards in exchange for investing in American job creating businesses.

Ald. Robert Bauman, the last to speak, was described as “Mr. Historic Preservation” by Mervis. Bauman has been a strong supporter of The Brewery project and remarked on his history with the Pabst brand. A Chicago native, Bauman noted that Pabst was his “first beverage of choice” when he came to Milwaukee in 1970 to attend college at Marquette University. Once the brewery closed its doors, he stopped cold and didn’t drink a drop of it until today’s press conference. Bauman remarked that “it just felt good consuming their product, it felt local, it felt authentic,” until the employees were treated so harshly when Pabst shuttered the brewery. He thanked the new owners for coming back to the city, and Zilber and the city for laying the groundwork to get them back. 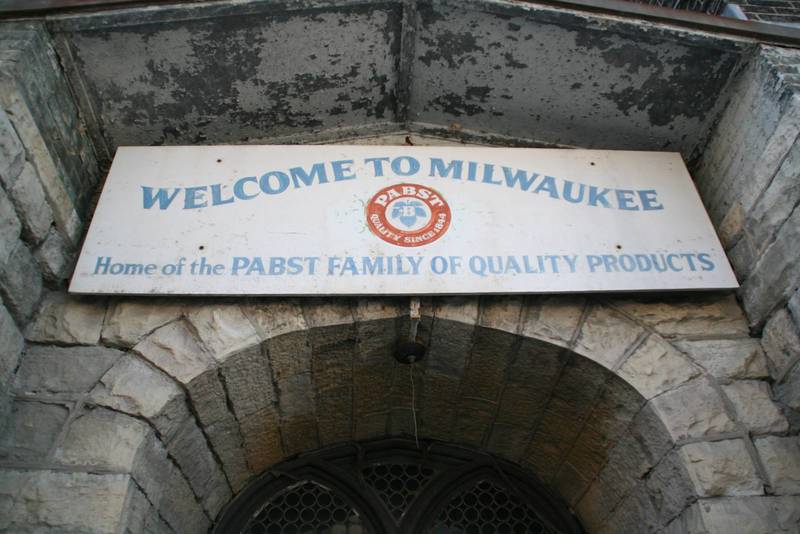 The project is icing on the cake for the work Zilber Ltd. and its late leader Joseph Zilber did to turn the abandoned brewery into a neighborhood. If Zilber Ltd. hadn’t invested in and restored the brewery complex, it’s obvious Pabst wouldn’t have found the area fit for a micro brewery. Barrett noted that when he got a call from Joe Zilber saying he was going to buy and renovate the then-abandoned brewery it was “one of the most amazing phone calls I have received.”

Zilber Ltd., with a number of partners including Gorman & Co. and Blue Ribbon Management, have managed to bring a hotel, a number of apartment buildings, a park, two office buildings, two colleges, a parking structure and now a brewery to the formerly abandoned complex. And Jim Haertel has greatly expanded his operation at Best Place, the bar and event venue in Pabst’s former visitor center. 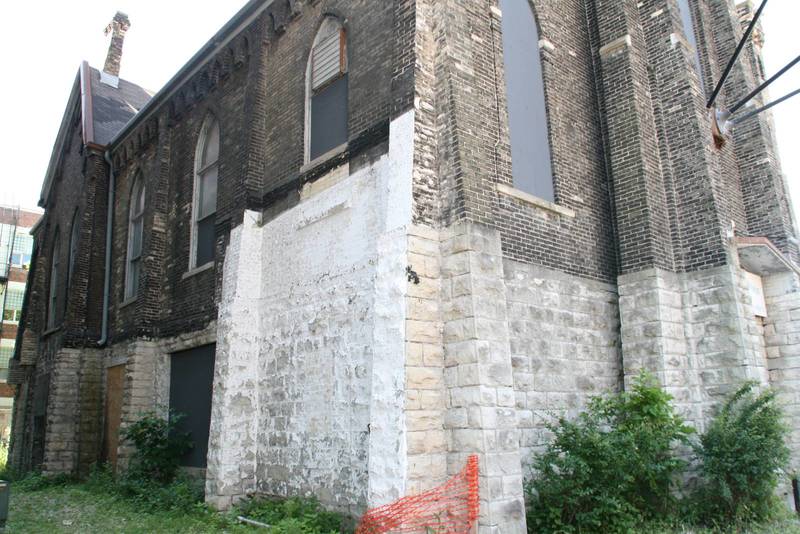 It’s no secret that Pabst (along with Schlitz, Blatz and a number of other brands) have all been brewed on contract by MillerCoors for years. In fact, if you take a tour of Miller’s flagship Milwaukee brewery you have good odds of seeing Pabst products moving down the assembly line. That’s not going to change anytime soon. At the new brewery Pabst will be making micro-brews from its historical archives of more than 50, long-unused recipes.

The company will still maintain its headquarters in Los Angeles for the time being. It has been located there since the Metropoulos family bought the company from the Kalmanovitz Charitable Foundation in 2010. Kaspher and TSG Consumer Partners, a private equity firm, acquired the brewing giant in November. The new brewery will be the only facility where Pabst itself brews its own beer; the rest is all brewed on contract.

As late as 2006 when I wandered the grounds of what is now The Brewery, I was often the only person around. Broken glass and chain link fences were the norm. Less than ten years later new construction and historic preservation rule the day at the new mixed-use neighborhood. Projects and activities include:

COVID-19’S Impact On EB-5: A Panel Discussion
Mona Shah
May 01, 2020
Updated Historical National Average Processing Times for the I-526 Petition
May 06, 2020
Criteria to Consider Before Selecting an EB-5 Project Investment
May 08, 2020
Preparing to Make an EB-5 Investment During Covid-19?
May 27, 2020
EB-5 Path To U.S. Citizenship After CoronaVirus
May 20, 2020
Join Professionals on EB5Projects.com →
Securities Disclaimer