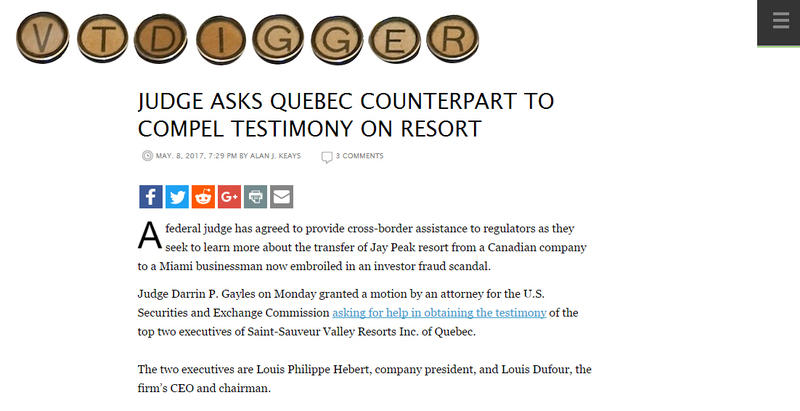 A federal judge has agreed to provide cross-border assistance to regulators as they seek to learn more about the transfer of Jay Peak resort from a Canadian company to a Miami businessman now embroiled in an investor fraud scandal.

Judge Darrin P. Gayles on Monday granted a motion by an attorney for the U.S. Securities and Exchange Commission asking for help in obtaining the testimony of the top two executives of Saint-Sauveur Valley Resorts Inc. of Quebec.

“The United States District Court for the Southern District of Florida presents its compliments to the Superior Court of Quebec in the province of Quebec, Canada, and requests judicial assistance to compel the attendance of two witnesses at an oral deposition in a civil proceeding before this Court,” states the request Gayles approved.

“The evidence sought in Quebec through this request is necessary in order for the Court to do justice in this case,” the judge later added. “Therefore, this Court respectfully requests that, in the interest of justice, the Quebec Superior Court issue appropriate orders, subpoenas, or other compulsory process necessary to compel Hebert and Dufour to attend an oral deposition.”

In 2008, the Quebec company, known then as Mont Saint-Sauveur International Inc., sold the ski resort only a few miles from the Canadian border to Ariel Quiros. A federal lawsuit brought last year by the SEC against Quiros alleges he improperly used EB-5 immigrant investor money to purchase the resort.

Quiros then went on over the next several years, according to that lawsuit, to misuse EB-5 investor funds to pay for massive upgrades at the resort and later projects in Newport and Burke.

The SEC says the two Canadian executives it wants to depose have “important information” relevant to the investor fraud case against Quiros.

The formal request Judge Gayles approved Monday to send is used to obtain testimony in cases that cross international borders.

The five-page document states that SEC attorneys Robert Levenson and Christopher Martin would take part in the questioning of the two executives with the Canadian company. Melissa Visconti, Quiros’ attorney, would also take part.

The SEC attorneys, according to the document, want to ask Hebert and Dufour about the discussion and negotiations in 2008 leading up to the sale of Jay Peak to Quiros.

Gayles presides over the SEC case pending against Quiros in federal court in Miami, which is where Quiros lives and many of his businesses are based.