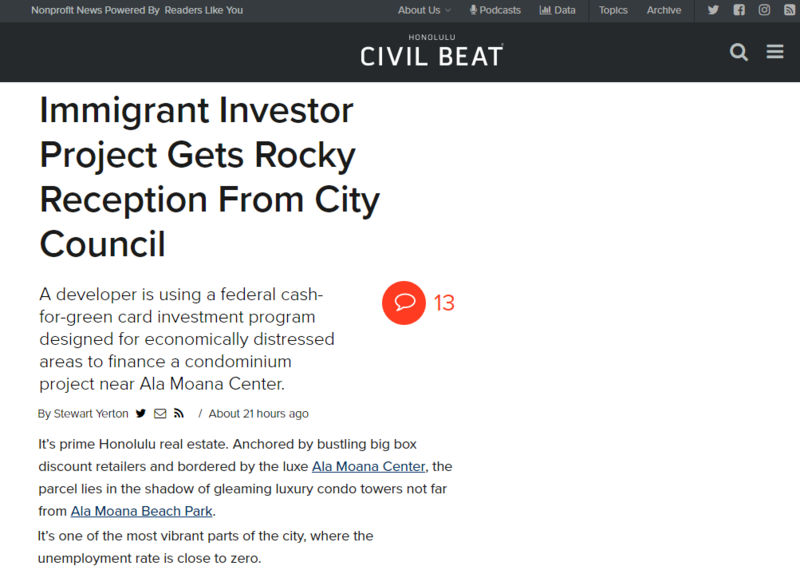 It’s prime Honolulu real estate. Anchored by bustling big box discount retailers and bordered by the luxe Ala Moana Center, the parcel lies in the shadow of gleaming luxury condo towers not far from Ala Moana Beach Park.

It’s one of the most vibrant parts of the city, where the unemployment rate is close to zero.

But don’t say that to the Hawaii Department of Business, Economic Development and Tourism — or the developer of the Hawaii City Plaza Project slated to be built on two parcels on Sheridan Street in the middle of this booming area. 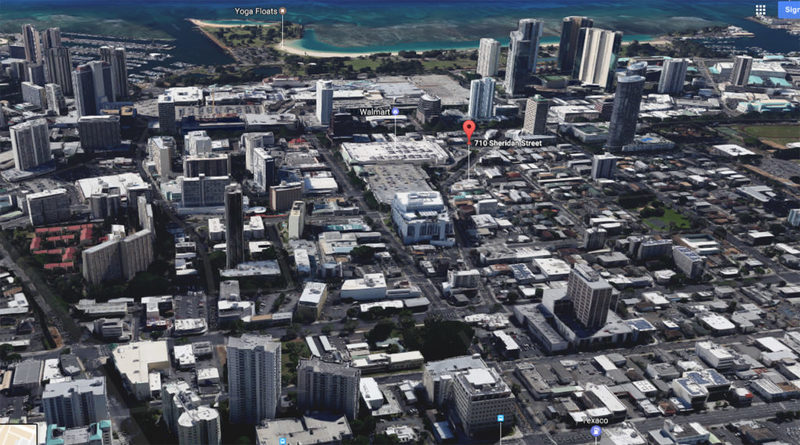 The proposed Hawaii City Plaza Project at 710 Sheridan St. near Ala Moana Center is raising money through a federal program for economically distressed areas. The unemployment rate there is less than 1 percent.

The program lets foreign nationals invest as little as $500,000 to create jobs in areas designated as having high unemployment or struggling. In exchange they obtain a visa known as an EB-5, which allows holders to become permanent residents and provides a path to citizenship.

The census tract where Fang’s project will be located has an unemployment rate of only 0.8 percent. But to pass muster with the EB-5 requirements, Fang includes his parcel in a “targeted employment area” that stretches from the edge of Waikiki to rural Makua Valley, an area with double-digit unemployment. 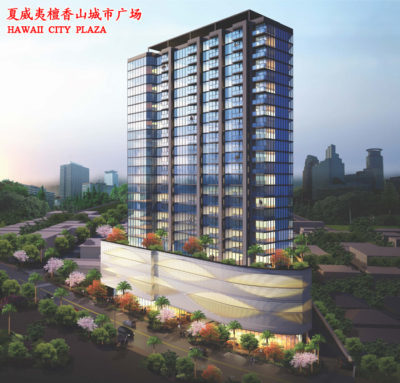 An artist’s rendering of the proposed Hawaii City Plaza project near Ala Moana Center that will include 163 condominium units.

But far from applauding Fang’s project, members of the City Council’s Committee on Zoning and Housing on Thursday grilled Fang with tough questions about using the federal program to raise money for the project.

Normally under the EB-5 program, investors must spend $1 million to be eligible for their EB-5 visa. But if the project is in a “targeted employment area,” investors only need to spend $500,000.

So how does Fang’s project qualify for the discount residency?

The Sheridan Street parcels are at the tail end of a gecko-shaped area that winds across Oahu from Ala Moana along the general route of the proposed Honolulu rapid transit line to Kunia before expanding into areas with double-digit unemployment, like Waianae, Makaha and Makua.

This map was created by the Hawaii Department of Business, Economic Development & Tourism.  The combined unemployment rates in the census tracts averaged out to 8.1 percent in 2015, or 153 percent of the national average for the time period, DBEDT director Luis Salaveria wrote in a letter to Fang’s company, California Investment Regional Center. 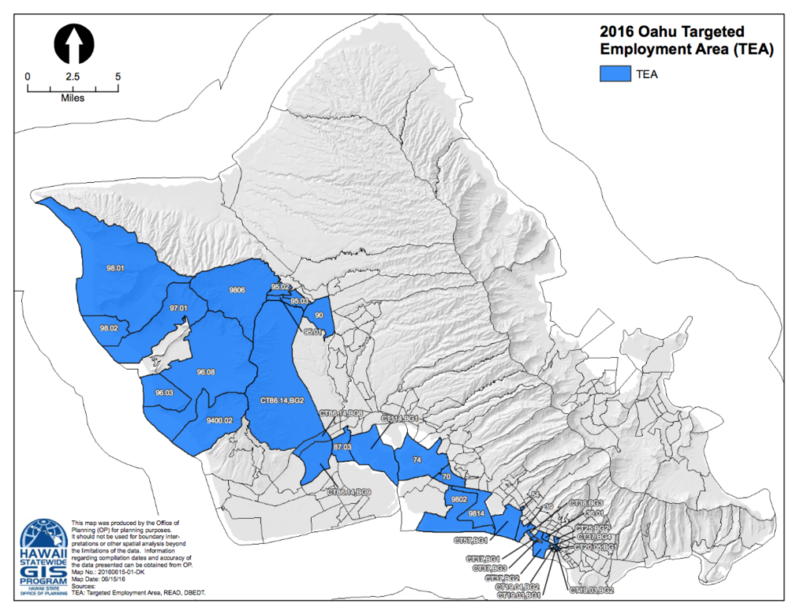 DBEDT’s targeted employment area meanders across Oahu encompassing areas with high unemployment and Sheridan Street, which has an unemployment rate of less than 1 percent
Department of Business, Economic Development & Tourism

“My department hereby designates this area is a Targeted Employment Area for the purposes of the EB-5 program,” Salaveria wrote.

So Fang’s project, located at 710 and 730 Sheridan St., qualifies even though the immediate area’s unemployment rate is miniscule, according to DBEDT. The parcels are between Keeaumoku and Piikoi streets, mauka of the Wal-Mart and Sam’s Club building.

George Massengale, director of community engagement for Habitat for Humanity in Hawaii, said he had worked with EB-5 investors in rural areas of the Big Island. But he questioned applying the targeted employment area exception to a thriving part of Honolulu where unemployment is practically nil.

“It wouldn’t make sense to me,” he said. “It defeats the purpose” of the exception to EB-5’s standard $1 million investment requirement.

Members of Zoning and Housing Committee on Thursday sharply questioned Fang on another aspect of the proposal: whether the EB-5 investors would merely be equity investors in the development or whether they would also be buying units in the proposed condominium tower.

Fang said the units would be marketed to Hawaii residents.

But Councilwoman Kymberly Marcos Pine, the committee chair, expressed incredulity at that statement, noting Fang had said during a previous committee meeting that he had already sold many units to investors in China. 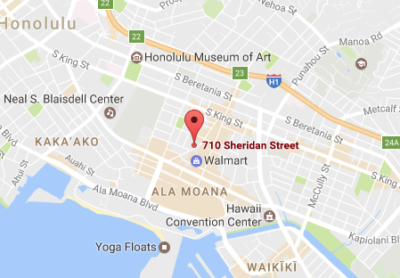 Councilman Ikaika Anderson echoed Pine, saying he understood Fang to say 60 units have been sold to people in China.

“Have 60 percent of the units been sold?” Anderson asked. “Is the project being marketed overseas? We need to understand all of that.”

At a time when Hawaii is facing a housing shortage, Anderson said it does not make sense to support a transit-oriented development project that would be aimed at people from outside of Hawaii.

Fang was clear Thursday saying that the EB-5 investors would receive only immigration visas for their investment. However, he added that they would receive their initial investment back at the end of five years with no interest, and then could buy units like anyone else.

Fang continued to raise eyebrows when he told council members that he did not plan to use union labor to build the tower.

Fang said he’s offering to donate $2 million to the Honolulu rail project as a community benefit  in exchange for not using union workers.  He said union labor costs $70-$80 an hour versus $30 an hour for non-union workers.

After being questioned, Fang told the council that he would be willing to use union labor as “a community benefit.”

Councilman Joey Manahan replied, “I don’t think the unions would see that as a community benefit.”

After the meeting, Fang said in an interview that he believes council members misunderstood his previous comments about selling units to Chinese investors.

The federal Immigrant Investor Program was created by Congress in 1990 to stimulate the U.S. economy. There were 157 EB-5 immigrant investors and their families in Hawaii between 2009 and 2014, according to a January 2017 report by the U.S. Department of Commerce. The national total was 16,946, the report said.

According to a spokeswoman for the U.S. Customs and Immigration Service, which administers the program, there are 10,000 EB-5 immigrant visas available nationwide annually.

After the meeting Councilwoman Ann Kobayashi was optimistic about the parcel’s prospects, even if Fang’s project does not work out.

“I was looking forward to having the area cleaned up,” she said. “If it’s not going to work out, we’ll just move on and find someone who’ll make it work.”