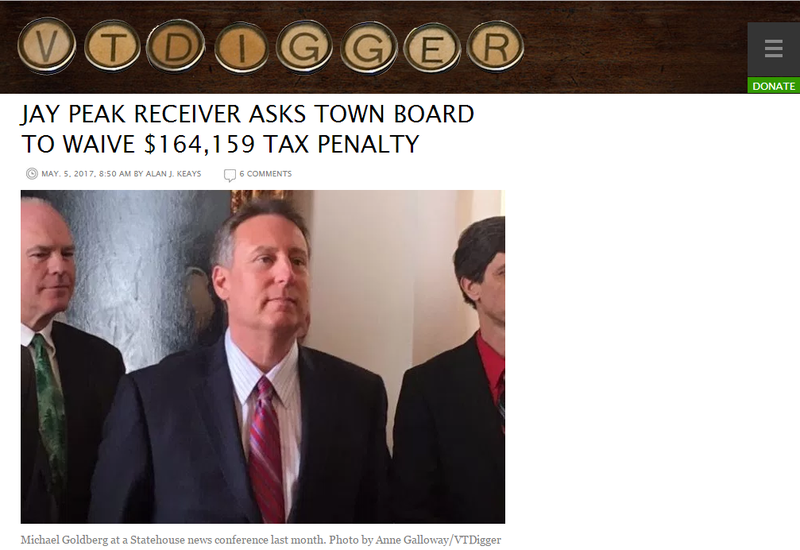 The man running Jay Peak Resort has asked a town board to forgive a tax penalty.

The resort missed an October tax payment deadline and a one-time 8 percent late payment penalty was added to the tax bill, totaling $164,159.

“We do not have the funds at this point in time,” Goldberg said at a meeting of the town’s Board of Abatement.

The board, led by Peggy Loux who is also chair of the town’s Select Board, entered into a closed-door deliberative session as allowed by law after Goldberg presented his arguments. The board has 30 days to issue a written decision.

Goldberg was appointed the receiver for the properties in April 2016 when investor fraud lawsuits were filed against Jay Peak’s owner Ariel Quiros and Bill Stenger, the resort’s CEO and president.

At the meeting with Jay officials, he recalled the difficulty of putting the resort back on sound financial footing.

“There were times last summer that I woke up in the middle of the night not knowing if the resort was going to stay open,” the receiver said. “That lack of liquidity at that time is the reason we were not able to pay our taxes.”

The resort recently reported a strong ski season, quadrupling profits over the previous year, from $1.8 million to more than $9 million.

However, Goldberg said that money is set aside to help fund much-needed capital projects at the resort and to provide cash to get the resort through the slower summer and fall months.

Dave Sanders, a member of the Board of Abatement, suggested instead of waiving the penalty, putting it off for a year or two to allow the resort to get on firmer footing.

“The town of Jay has been hurt in many ways also,” he said. “Many taxpayers in the town have had their property affected by this whole thing.”

Taxes in Jay were due Oct. 14. However, no payment was made by that deadline to cover the taxes for the resort and its related properties. In addition to a tax penalty, the town assessed accumulated interest at a rate of 1 percent a month for the first three months, and 1.5 percent after that.

The resort has a total value of about $120 million on the town’s grand list, according to public records.

In December, Goldberg worked out an arrangement with the town to pay the roughly $2 million in taxes, not including penalty and interest, over a period of several months. The last payment was due this month.

Goldberg on Thursday night presented the town with the final installment, a $437,000 check.

The receiver did agree that the town was entitled to the accumulated interest since the tax deadline, totaling $113,539 as of Thursday.

“I will pay that,” Goldberg said. “It’s the penalty that the statute speaks to.”

Once a property is in receivership tax penalties are “non-recoverable” under federal law governing bankruptcy, Goldberg said.

He was not aware of a case in which tax penalties had been paid by a receivership. And he didn’t want to make this the first.

“If the penalty gets abated how do I explain that to every other taxpayer?” Cindy Vincent Goodyear, the town’s delinquent tax collector, asked Goldberg. “You didn’t have to pay it, but they do.”

“We are in bad situation, we’ve gone through a federal receivership,” Goldberg replied. “More importantly, the way you would explain it is, you’re not entitled to collect it under the law.”

If another taxpayer were in the same situation, in bankruptcy of receivership, they would be entitled to the same relief, he added.

“I’m not asking you to do anything special under the law for us than them,” Goldberg said. “We’re not asking for any special treatment.”

Money from a $150 million settlement reached last month with Raymond James, a financial firm that regulators say had been used by Quiros to perpetrate what the U.S. Securities and Exchange Commission referred to as a “Ponzi-like” investment scheme, is already allocated per the terms of the agreement.

Unpaid contractors who did work and businesses that provided services for projects headed by Quiros and Stenger will receive the millions in funds they are owned as a result of the settlement, the receiver said.

Also, another $67 million will go to refund investors who put $500,000 each into a proposed biomedical research in Newport pitched by Stenger and Quiros, but never got off the ground. The SEC referred to that project as “nearly a complete fraud.” And Thursday night, Goldberg said those investors had their money “stolen” from them.

Some investors in other projects will also receive refunds on the $500,000 they put up, and settlement funds will be used to complete developments that were left unfinished, including the Stateside condo village at the resort.

The developers raised the funding for their projects through the EB-5 program, which allows foreign investors to put up $500,000, plus a $50,000 administrative fee, into qualified projects. If that investment leads to the creation of 10 American jobs, the investor becomes eligible for permanent U.S. residency.

Quiros recently hired a new attorney who said recently her client is cooperating with authorities.

On Thursday night, questions were raised about seven properties Quiros personally owned in the town of Jay that were also delinquent in taxes, including townhouses and condos. That bill totals $38,320, including interest and penalties.

Those properties have been slated to go up for tax sale later this month. Goldberg said tax sales couldn’t take place because those assets have been frozen by the federal court in Miami.

The receiver did say that because they are Quiros’ personal property, as receiver he could secure money through the court from the Miami businessmen’s frozen assets, including a mortgage he took out a luxury condo in New York, to pay that tax bill.

“That should not be a problem,” Goldberg told the Board of Abatement. “One way or another, I’ll get that paid.”

“Why not use that to pay the town?” Loux asked.

Asked what would happen when taxes are due again in October, Goldberg said it is already budgeted for payment.

“We set aside money,” the receiver told the board. “You’ll not have to go through this next year.”