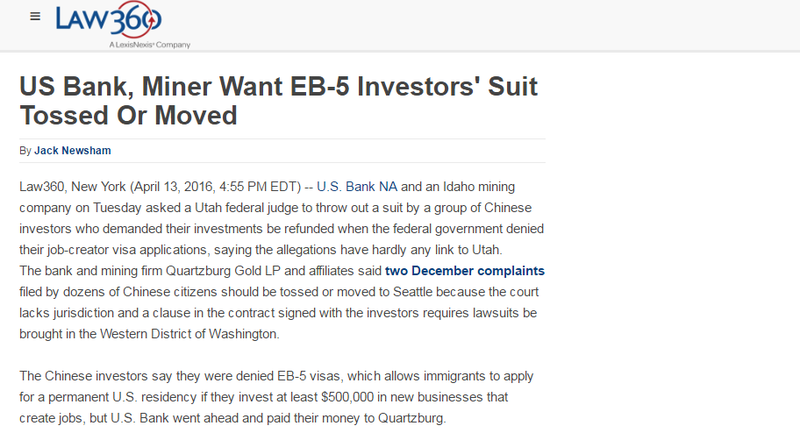 U.S. Bank NA and an Idaho mining company on Tuesday asked a Utah federal judge to throw out a suit by a group of Chinese investors who demanded their investments be refunded when the federal government denied their job-creator visa applications, saying the allegations have hardly any link to Utah.

The bank and mining firm Quartzburg Gold LP and affiliates said two December complaints filed by dozens of Chinese citizens should be tossed or moved to Seattle because the court lacks jurisdiction and a clause in the contract signed with the investors requires lawsuits be brought in the Western District of Washington.

The Chinese investors say they were denied EB-5 visas, which allows immigrants to apply for a permanent U.S. residency if they invest at least $500,000 in new businesses that create jobs, but U.S. Bank went ahead and paid their money to Quartzburg.

The bank, however, argued that the complaint didn’t adequately demonstrate that that amounted to securities fraud or a breach of its fiduciary duty, and said the suit should be moved to Seattle. Quartzburg and its co-defendants, ISR Capital LLC, Idaho State Regional Center LLC and Sima Muroff, said their request that a U.S. Bank employee in Salt Lake City discharge the funds didn’t create jurisdiction.

“Simply signing a document that was also signed by someone who might have had contacts with Utah is too random and tenuous to give rise to personal jurisdiction,” the mining company said.

Investments in Quartzburg Gold are at the center of another lawsuit in D.C. federal court, in which 72 Chinese investors accused U.S. Citizenship and Immigration Services of improperly denying their EB-5 visa applications connected to their investment in the mining company.

Because the names of the investors in the suit against USCIS are being kept under seal, it wasn’t immediately clear Friday if the plaintiffs in the Utah lawsuits include any of the same investors suing USCIS.

The Chinese investors claim Quartzburg Gold convinced U.S. Bank to release the funds by presenting an acknowledgement that USCIS had simply received the investors’ visa applications, not documentation that the agency had actually approved them.

After U.S. Bank transferred the money to Quartzburg, the investors asked for their money back first from the mining company and then from the bank, according to their complaints. The investors said both of those requests were denied.

A lawyer for the EB-5 investors didn’t reply to a request for comment.

Quartzburg and its affiliates are represented by Darwin L. Overson of Overson & Sheen PLLC.