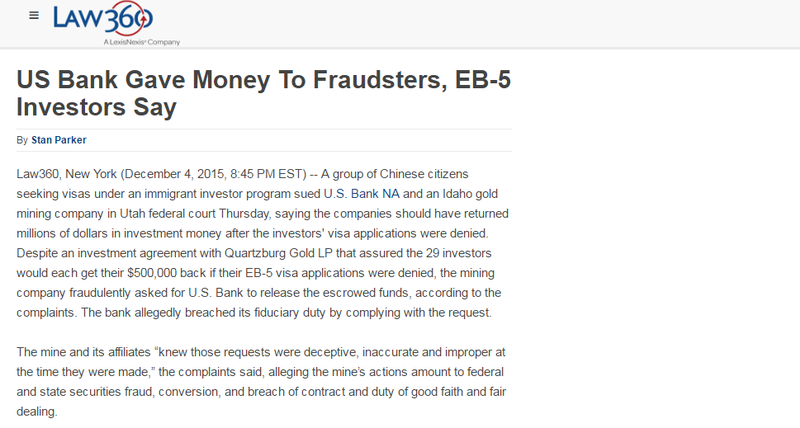 A group of Chinese citizens seeking visas under an immigrant investor program sued U.S. Bank NA and an Idaho gold mining company in Utah federal court Thursday, saying the companies should have returned millions of dollars in investment money after the investors' visa applications were denied.

Despite an investment agreement with Quartzburg Gold LP that assured the 29 investors would each get their $500,000 back if their EB-5 visa applications were denied, the mining company fraudulently asked for U.S. Bank to release the escrowed funds, according to the complaints. The bank allegedly breached its fiduciary duty by complying with the request.

The mine and its affiliates “knew those requests were deceptive, inaccurate and improper at the time they were made,” the complaints said, alleging the mine’s actions amount to federal and state securities fraud, conversion, and breach of contract and duty of good faith and fair dealing.

Investments in Quartzburg Gold are at the center of another lawsuit pending in federal district court in Washington, D.C., in which dozens of Chinese investors accused U.S. Citizenship and Immigration Services of improperly denying their EB-5 visa applications connected to their investment in the mining company.

Because the names of the investors in the suit against USCIS are being kept under seal, it wasn’t immediately clear Friday if the plaintiffs in the Utah lawsuits are the same investors suing USCIS.

According to the new lawsuits filed Thursday, Quartzburg Gold convinced U.S. Bank to release the funds by presenting an acknowledgement that USCIS had simply received the investors’ visa applications, not documentation that the agency had actually approved them.

After U.S. Bank transferred the money to Quartzburg, the investors asked for their money back first from the mining company, and then from the bank, according to the complaint. The investors said both of those requests were denied.

U.S. Bank declined to comment on the allegations, and attorneys for the investors did not respond to requests for comment Friday. Current contact information for Quartzburg Gold could not be immediately identified.

Also listed as defendants in the lawsuits are ISR Capital LLC and Idaho State Regional Center LLC, two companies affiliated with Quartzburg Gold, along with their manager, Sima Muroff. Muroff did not immediately respond to a request for comment Friday.

Counsel information for the defendants was not available Friday.