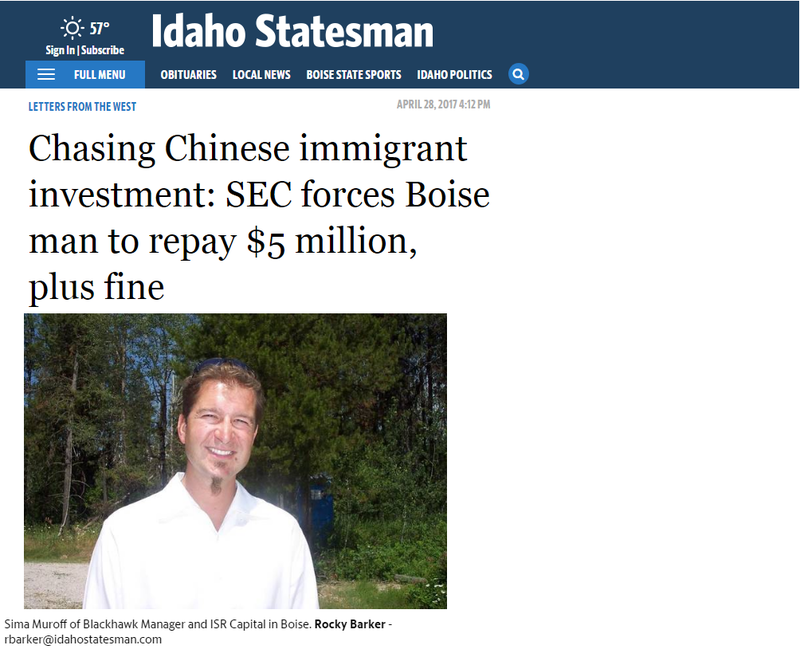 One of the key men behind Idaho’s controversial overture to Chinese investors in 2007 agreed to pay back $5 million in investors’ funds that the Securities and Exchange Commission said he misappropriated.

Boise miner and real estate developer Sima Muroff raised more than $140 million to create U.S. jobs through an immigrant-investor program that offered the possibility of residency in exchange for U.S. investment.

But in a settlement the SEC filed Friday in U.S. District Court in Boise, Muroff agreed to repay $5 million plus $800,000 in interest and a $2 million penalty. He neither admitted or denied the allegations in the complaint.

Beginning in 2010, when Muroff accompanied Idaho Gov. Butch Otter on a trade mission to China, he raised millions from Chinese investors to develop real estate in McCall and mines in Idaho and Montana. The more than 200 Chinese investors were to get green cards for making the investment under the federal EB-5 program. The EB stands for “employment-based.”

The SEC alleged Muroff siphoned off more than $5 million of those investor funds for an investment in a zip-line operation and purchases of two personal residences, a Range Rover and a BMW.

“As alleged in our complaint, Muroff secretly enriched himself with millions of dollars in EB-5 investor funds that should have gone into job-creating enterprises,” said Jina L. Choi, Director of the SEC’s San Francisco Regional Office.

Muroff’s bookkeeper and administrative assistant, Debra L. Riddle, also was charged in the SEC’s complaint. She agreed to pay back $503,417 plus $81,626 in interest and a penalty of $100,000. She also neither admitted or denied the allegations in the complaint.

“My clients are pleased to put this matter behind them,” said Nels Mitchell, the Boise lawyer who represented Muroff, Riddle and the companies. “Throughout this matter my clients cooperated with the investigating agency and worked towards a resolution that my clients hope will help the investors continue moving forward toward residency and citizenship.”

Muroff must turn over his EB-5-related businesses to an independent manager within 10 days after a judge approves the settlement. He has picked Brian Dickens, of Star, a former Idaho Department of Commerce manager who now helps immigration investors. Dickens is the author of the book, “Finding Refuge from Criminal, Economic, and Political Instability through US Investment Visa.”

Dickens’ selection must be approved by the SEC and the judge. He would work under the oversight of a SEC monitor.

Muroff, 40, was using the EB-5 immigration investment program established by Congress in 1990 to encourage foreign investment. The idea is that people who want to immigrate to the United States invest in “regional centers,” which in turn invest in American business opportunities.

The foreign investors had a shot at both profits and a green card. It has produced mixed results. Fraud cases like this one have been brought all across the country.

Critics say that instead of helping depressed rural areas, the program’s benefits have gone to rich places essentially selling green cards. The program officially ended Friday; its unclear whether Congress with reauthorize it.

Muroff and his companies, Blackhawk Manager and ISR Capital, invested the Chinese money in real estate, a successful gold mine near Boise and other mines in Montana as required under the program. But the U.S. Citizenship and Immigration Services denied the more than 200 investors their green cards.

In 2015, 41 investors sued Immigration Services demanding they get their cards. Three weeks ago, a federal judge ruled in their favor and remanded the case back to the agency, Dickens said. Muroff’s real estate and mining businesses remain viable, he said.

The Gold Hill Mine extracted thousands of ounces of gold in 2012 from an old mine near Placerville, 30 miles from Boise. The company is part owner of a garnet mine in Montana.

“I intend to do everything possible to follow up with these investors’ green cards and follow through on their return on investment,” Dickens said.

Dickens was in China with Otter and Muroff as the state’s promoter of the EB-5 program. When the bottom fell out of Idaho’s economy in 2007, Otter was desperate for a state economic development program and was short on cash to make it happen. The governor made the EB-5 program and immigration investment a cornerstone of Project 60, his effort to increase Idaho’s gross domestic product to $60 billion.

After many Idahoans expressed dismay about Chinese investment in Idaho, Otter distanced from the program and from Muroff.