EB-5 program for foreign investors is increasingly popular... and contentious 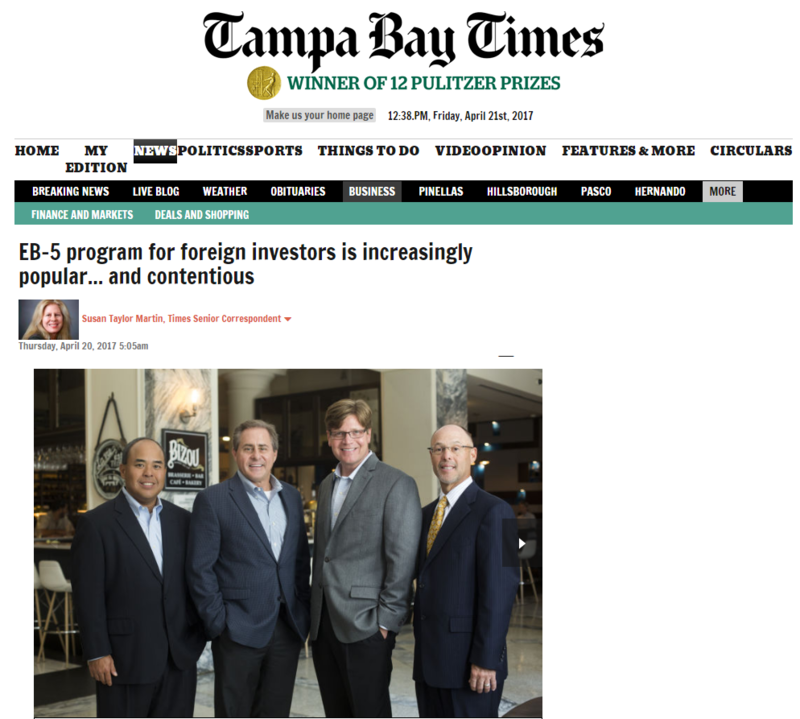 At first blush, the new Wyndham Grand Resort on Clearwater Beach wouldn't seem to have much in common with an office plaza in Haines City.

Nor would a senior care facility in Tampa tend to be mentioned in the same sentence as a Crunch Fitness center or the University of Miami's life sciences building.

Yet all of these were funded in part by the same source — foreigners hoping to become legal permanent residents of the United States.

Created in 1990, the EB-5 Immigrant Investor program enables foreigners who invest at least $500,000 in job-creating U.S. projects to obtain green cards for themselves and their immediate families. Once relatively obscure, the program gained steam during the Great Recession when banks stopped lending and developers turned to EB-5 money to build everything from hotels and charter schools to shopping centers, airports and assisted living facilities.

Now, at a time when U.S. immigration policy is so contentious, the EB--5 program is drawing greater scrutiny. Critics says the program — which sets aside 10,000 visas a year solely for immigrant investors and their families — allows rich foreigners to buy their way into the United States. Last year, 75 percent of all EB-5 visas were issued to Chinese nationals, many of whom made fortunes in that country's real estate boom but want to live here so their children can attend American universities.

"Simply put, EB-5 sends a terrible message to the millions of immigrants patiently waiting their turn to enter the United States legally," Sen. Dianne Feinstein of California wrote in an op-ed calling for an end to the program. "It says that American citizenship is for sale, and that's not what our country stands for."

The EB-5 program also been tainted by allegations of fraud and corruption, partly as a result of loose oversight and scant data on the number and type of jobs created.

"Knowledge of the program's true economic impact is elusive at best," according to a 2014 study by the Brookings Institution and Rockefeller Institute.

But while agreeing that the EB-5 program has its flaws, developers using it in the Tampa Bay area say it is effective and worthwhile.

"Overall, I think you'll find this continuing to be a high- popularity program with the extreme vetting that they (in President's Trump administration) are talking about," said Kirk Eicholtz of the Florida Equity & Growth Fund Regional Center. "This is the best way to make certain only the good families are getting in because the vetting process is so intense. The beautiful thing is they have the ability and capability to come over here and create businesses and create employment. These are families that not only are takers but givers as well. That's what we miss a lot in our immigration programs."

Most EB-5 investments are handled through so-called "regional enters," typically private companies like Eicholtz's in Tampa. U.S. Citizenship and Immigration Services, which runs the EB-5 program, has authorized more than 800 centers nationwide to develop projects and solicit foreign investment to help pay for them.

After extensive screening, the immigrant investor is issued a conditional green card. The conditions are removed once the investor and the regional center can show that the project has created or preserved at least 10 full-time jobs. Investments from several, even hundreds of foreigners, can be pooled to fund a single project.

Eicholtz has tapped EB-5 money for a $30-million senior care facility under construction near the University of South Florida. He has five similar facilities about to break ground throughout Central Florida.

Such projects represent a good use of the EB-5 program, he says.

As baby boomers age, "assisted living and senior care facilities are coming in high demand," Eicholtz said. "The reason we utilize the EB-5 marketplace is it allows us to do a lot more projects because the cost of capital is less than I would find if I went to an investment bank in New York City."

Depending on the type of project, Eicholz says, EB-5 financing can reduce the cost by as much as 10 percent.

For immigrants, the main purpose of the program is to obtain a green card. Like all investors, though, they hope to get a return on their investment. For that reason, Eicholtz shies away from restaurant projects — too risky, he says — and favors ones more likely to succeed.

"These (immigrant) families are relying on your wisdom to make sure the project will be there and be viable," he said. "There are a lot of start-up companies that call all the time, they have a great idea, but the first dollar into a business cannot be EB-5 money. It's not fair to the investor just to speculate."

Like nursing homes that provide 24/7 care, hotels and apartment complexes also work well as EB-5 projects because they create jobs not only during construction but after they open for business.

"Typically in EB-5 you want to see some sort of operating aspect after construction," said Bradley Snyder of Tampa-based Atlantic American Partners.

He and partner Gar Lippincott have been involved in 25 EB-5 projects throughout Florida, including 10 in the Tampa Bay area. Among them: a new Marriott under construction in Tampa's Rocky Point area; the Aloft and Le Meridien hotels in downtown Tampa; the 500 Harbour Island apartment tower near downtown and the Pearce at Pavilion apartments in Riverview.

Lippincott and Snyder were working with more traditional investors when the financial crisis hit in 2008. "About that time, we stumbled into EB-5, and we thought that was an interesting way of raising capital," Snyder said.

Now, they operate funds that pool money from EB-5 applicants and invest it in a portfolio of several projects to reduce the risk. The funds have targeted returns to investors of 3 to 6 percent.

"We market around the globe," Lippincott said, including frequent trips to China where they attend immigration expos. They also cultivate sources like immigration lawyers, who often have clients wanting green cards.

"People are more familiar with EB-5 in general," Lippincott said. "It's not this little speciality niche but people hear about it and talk about it. It's popular because investors really are seeking the immigration benefit that goes with it and developers are looking for it in some cases, it just depends on the market."

Joe Collier acknowledges that he had never heard of EB-5 until the recession. Since then, his Mainsail Lodging, a Tampa hotel development and management company, has used EB-5 money to build the Epicurean hotel in South Tampa across from Bern's Steak House and the Waterline, an all-suite resort due to open later this spring on Anna Maria Island.

The two projects have created more than 200 jobs combined, Collier said. He personally met with all 20 investors, who came from several countries including Brazil and Russia, and even invited some to his home.

"I would say the majority want to be part of the United States for the education of their kids and in some cases they just want to be able to come over and invest dollars here (because of) whatever upheaval there is in their country," Collier said.

A lack of sharp oversight, however, has led to problems, including allegations that a Texas couple stole funds from foreign investors under the guise of the EB-5 program and that the owner of Chicago regional center tried to defraud more than 250 investors in a project involving a hotel and conference center near O'Hare International Airport.

"Look at the skyline and go up and down the interstate, there are EB-5 projects everywhere," he said. "This is a program our citizenry should want to stay strong and active. It truly is bringing foreign families in to create jobs for Americans and it doesn't cost the government one penny. This is a no-brainer."

HOW IT WORKS: Subject to approval by U.S. Citizenship and Immigration Services, foreigners who invest a minimum of $500,000 in U.S. projects that create or preserve at least 10 jobs can obtain legal permanent residency. They do not have to stay in the area where they invest in a project but can live anywhere in the United States.

Most EB-5 investments are handled by "regional centers,'' typically private companies, that the immigration agency authorizes to develop projects in a specific area, state or multiple states.

WHO GETS THE VISAS: In 2016, 75.6 percent of the 10,000 of visas annually set aside for the EB-5 program went to mainland-born Chinese. Other nationalities in the top five were Vietnamese (3.4 percent); South Koreans (2.6 percent); Chinese born in Taiwan (2 percent); and Brazilians (1.5 percent).

JOBS: A joint study by the Brookings Institution and the Rockefeller Institute estimates that between 1990 and 2014, the EB-5 program created 85,5000 full-time jobs and attracted $5 billion in direct investments.

Congress is considering several changes to the EB-5 program for foreign investors, among them raising the minimum investment from $500,000 — unchanged since the program started 27 years ago — to $800,000 or more. A Brookings-Rockefeller report also recommends:

• Collecting more data on the program and making it public. "The scarcity of reliable historical data about the performance of the EB-5 visa program makes it very difficult to evaluate the benefits it has conferred to individuals, businesses and localities," the report said.

• Encouraging coordination between developers and local economic development councils that know a community's needs. The Haines City development council, for example, supported a developer's effort to obtain EB-5 investors for a new office plaza as well as a new resort to cash in on increased tourism sparked by nearby Legoland.

• Giving the U.S. Department of Commerce some oversight of the program. While it makes sense to have the immigration service in charge of the immigration aspects, Commerce is in a much better position to evaluate the program's economic impact, the report concludes.