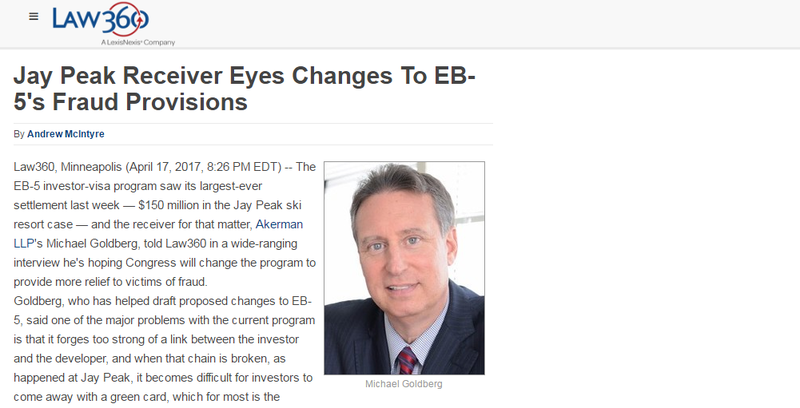 The EB-5 investor-visa program saw its largest-ever settlement last week — $150 million in the Jay Peak ski resort case — and the receiver for that matter, Akerman LLP's Michael Goldberg, told Law360 in a wide-ranging interview he's hoping Congress will change the program to provide more relief to victims of fraud.

Goldberg, who has helped draft proposed changes to EB-5, said one of the major problems with the current program is that it forges too strong of a link between the investor and the developer, and when that chain is broken, as happened at Jay Peak, it becomes difficult for investors to come away with a green card, which for most is the primary investment objective.

Currently, EB-5 investors commit as little as $500,000 to a project and, assuming the project creates 10 jobs per investor, the investor comes out of the deal with some minimal investment gains and a green card.

The program, which will expire at the end of April unless Congress extends it, has various proposed changes on the table, including raising the minimum investment threshold, increasing the 10,000-visa-per-year quota and changing the way the quota is defined such that dependent visas are not counted.

But there’s one change in particular that Goldberg is hoping to see: giving investors more flexibility so that they’re protected if problems arise.

“I'm hoping that Congress will understand that many of these victims, not just in Jay Peak, but in all the cases where there's fraud, are good-intentioned people who don't deserve to be victimized,” Goldberg told Law360 in a recent interview.

“We're hoping that Congress will enact the revised law.”

Goldberg gave a hypothetical example to illustrate the link he’s referring to: Say an insurance company comes in to return capital to investors following a hotel’s destruction in a fire. Under the current EB-5 program, investors would have difficulty getting green cards, because the presence of the insurance company has ostensibly broken the initial link between the investors and the developer, he said.

That's something he's working to change.

For Goldberg, working with Congress on fraud provisions in EB-5 is the culmination of a whirlwind 12 months that started when he got the call asking if he would serve as receiver for the famed Vermont ski resort, a project that was once the darling of the EB-5 world.

Jay Peak had become embroiled in allegations in the Southern District of Florida brought by the U.S. Securities and Exchange Commission and investors who claimed Raymond James & Associates Inc. and a former branch manager conspired with several individuals affiliated with Jay Peak and the nearby Burke ski resort to bilk more than 800 investors out of $200 million or more.

“The SEC had floated my name by the court, and the court called and asked me,” Goldberg said, recalling the events of a year ago.

He said he's done more than two-dozen receiverships, and this one was particularly complex for a number of reasons.

“What sets this receivership apart a little bit is that there are operating entities. Many times where there are allegations of fraud [the entities] are shut down and not operating,” he said.

“This had nearly 1,500 employees. We had payrolls to make. We were operating a ski resort coming out of winter ... [and] heading into the worst time of the year,” Goldberg added.

Goldberg, who is co-chair of Akerman's fraud and recovery practice group, said he initially focused on stabilizing the asset and preserving value, and one of the initial obstacles was the ski tram.

“The first month the tram was shut down by the state. It cost us $5 million to repair it. We had to do it. That was very symbolic of the resort,” he said. “We had to run a bunch of weddings that summer. We knew we had to keep that open, and we did. It's being repaired this spring,” Goldberg added.

There were other issues, though. Conventions were being held at the resort, and it was difficult to find the money to buy food for them. So Goldberg went on the hunt for cash, getting permission from the court to locate and use funds from a variety of bank accounts.

Additionally, the Burke resort wasn't even open at the time, and Goldberg knew it was critical to get its doors open by the coming winter.

Then, with the assets stabilized, the next task was to sit down with Raymond James.

“We started focusing on the litigation against the third parties. We sat down with Raymond James in July. We engaged in discussions with them,” Goldberg said. “To their credit, they engaged early with us.”

Of course, discussions from the start had an added layer of complexity, because the parties were talking not only about monetary compensation for the EB-5 investors but also about green cards.

Goldberg knew the case was a prime example of the shortcomings in the current EB-5 law, and so he went to Washington.

“The current law that exists is very draconian. It requires a very strong link,” he added.

But if Congress changes the program later this month, investors in such situations will have more protection, he said.

Meanwhile, Goldberg continues work on the project, and is currently working to improve profitability. He said he expects a sale process for the hotel to start this fall.

And legal work on the project is far from over, given that some of the immigration matters may take years to wrap up.

“It's clearly the most complicated receivership I've ever worked on,” he said. “I'll be surprised if I'm not working on this in 2020.”