Chinese investors purchase property near Ala Moana Center for $23M 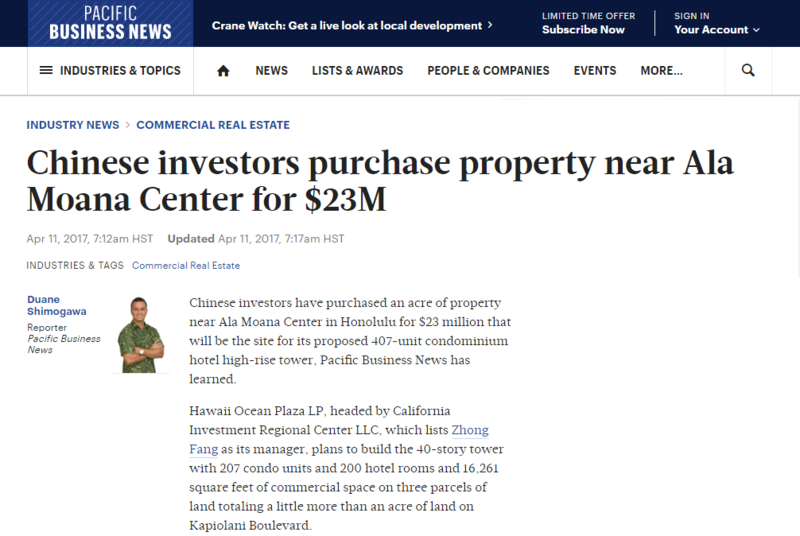 Chinese investors have purchased an acre of property near Ala Moana Center in Honolulu for $23 million that will be the site for its proposed 407-unit condominium hotel high-rise tower, Pacific Business News has learned.

Hawaii Ocean Plaza LP, headed by California Investment Regional Center LLC, which lists Zhong Fang as its manager, plans to build the 40-story tower with 207 condo units and 200 hotel rooms and 16,261 square feet of commercial space on three parcels of land totaling a little more than an acre of land on Kapiolani Boulevard.

The project, which will be built between Kapiolani Boulevard and Makaloa Street, is located directly across the state’s largest shopping mall and a Walmart. The property also is within the Honolulu rail transit line, and is near the future Ala Moana rail station.

Honolulu-based FSC Architects is part of the project, which was first reported by PBN.

The Hawaii Ocean Plaza is being developed as part of the EB-5 immigrant investor program. The program has resulted in $8.7 billion worth of foreign investment in U.S. businesses over the past three years and has created more than 35,000 jobs in America, according to U.S. Citizenship and Immigration Services.

To be eligible for visas that can ultimately lead to green cards, foreign investors must invest $1 million in new businesses that create 10 jobs in the U.S. That threshold falls to $500,000 if the investment is made in a rural area or areas with higher-than-average unemployment.

The Chinese developer already has two projects in the Los Angeles area that are smaller, limited-service hotels.

It also is developing the Hawaii City Plaza project not too far away on Sheridan and Cedar streets behind Walmart and Sam’s Club in Honolulu. The 26-story mixed-use project will include three restaurants, 163 residential condo units, with a mix of affordable and market-rate units.

The company paid a total of $8.5 million for the three parcels for its Hawaii City Plaza project, bringing its total for its two proposed tower projects at $31.5 million.