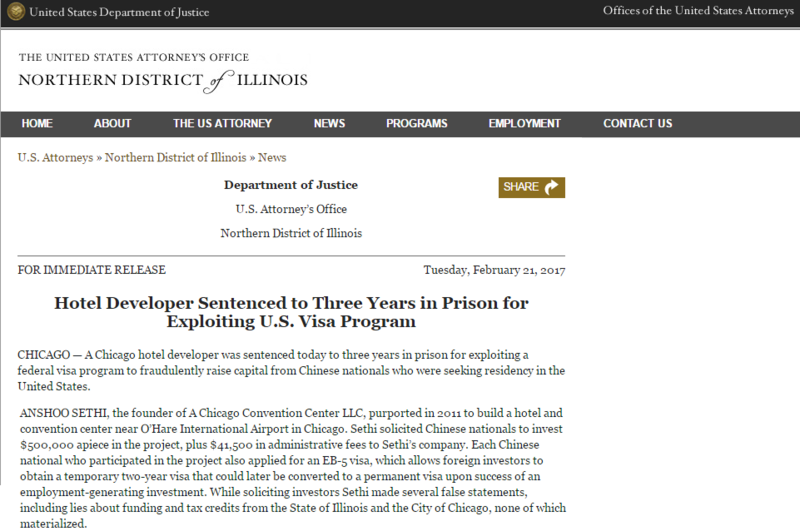 A Chicago hotel developer was sentenced today to three years in prison for exploiting a federal visa program to fraudulently raise capital from Chinese nationals who were seeking residency in the United States.

ANSHOO SETHI, the founder of A Chicago Convention Center LLC, purported in 2011 to build a hotel and convention center near O’Hare International Airport in Chicago. Sethi solicited Chinese nationals to invest $500,000 apiece in the project, plus $41,500 in administrative fees to Sethi’s company. Each Chinese national who participated in the project also applied for an EB-5 visa, which allows foreign investors to obtain a temporary two-year visa that could later be converted to a permanent visa upon success of an employment-generating investment. While soliciting investors Sethi made several false statements, including lies about funding and tax credits from the State of Illinois and the City of Chicago, none of which materialized.

The $900 million project never got off the ground, and no EB-5 visas were ever granted to investors.

The prosecution represents the largest EB-5 criminal fraud case in the United States to date.

The sentencing was announced by Zachary T. Fardon, United States Attorney for the Northern District of Illinois; and Michael J. Anderson, Special Agent-in-Charge of the Chicago Office of the Federal Bureau of Investigation.

“Defendant Anshoo Sethi abused the EB-5 visa program and blatantly lied to investors and the United States government on a massive scale,” Assistant U.S. Attorney Sunil Harjani argued in the government’s sentencing memorandum. “Overseas investors spent much time and energy making the difficult decision to invest in the Sethi project, and processing their visa applications – not knowing that the project was built on a bed of lies and forged documents.”

According to his plea agreement, Sethi’s fraud scheme began in the summer of 2011 and continued until February 2013. Sethi told investors that he planned to build the hotel and convention center on a three-acre parcel of land in the 8200 block of West Higgins Road in Chicago, just east of O’Hare. Sethi falsely told investors that his company maintained relationships with large hotel chains that purportedly were interested in the project, including Hyatt, Starwood and Intercontinental Hotel Group. To bolster an additional false statement regarding City of Chicago funding, Sethi signed a “Redevelopment Agreement TIF” document that purported to convey a relationship between the city and Sethi’s company. The document, which contained a bogus city ordinance implying that the project had been approved for TIF funding, was provided to third party brokers who used it to solicit investors.

In all, Sethi raised approximately $158 million from more than 290 investors. The U.S. Securities and Exchange Commission brought a civil lawsuit against Sethi and was able to restore approximately $147 million to Chinese investors.

The government is represented in the criminal prosecution by Mr. Harjani.