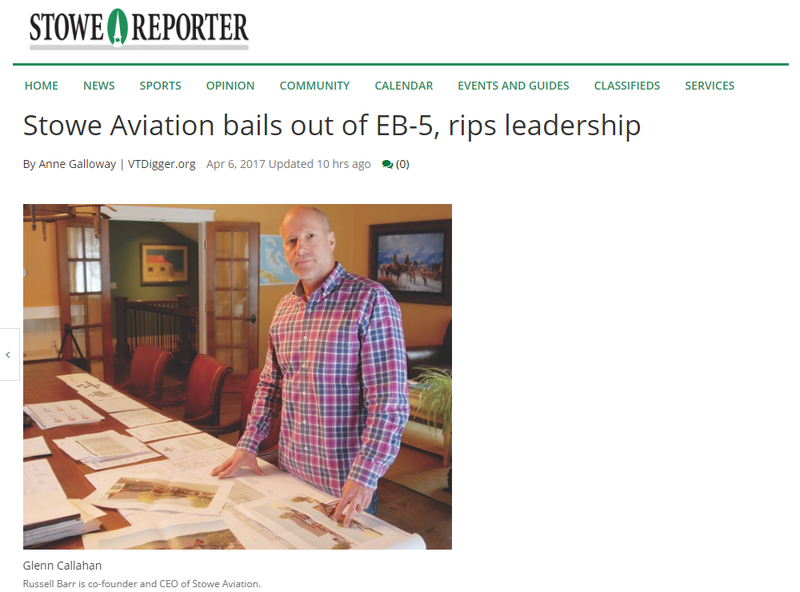 The operator of the Morrisville-Stowe State Airport is pulling out of an agreement with the Vermont EB-5 Regional Center.

Stowe Aviation had planned to use EB-5 immigrant investor funding, along with other private capital, to support major improvements, including a new terminal, at the state-owned airport. The company signed an agreement with the state regional center in May 2014.

The airport is near Stowe Mountain Resort, is used frequently by private planes and by vacation-oriented charter services.

Russell Barr, a lawyer who owns Stowe Aviation, says he hoped the airport expansion would help build the tourism economy in Lamoille County. He had planned to raise $14 million from 28 immigrant investors for the $30 million proposed expansion, which included an aircraft maintenance operation, a flight training school and an air charter.

Through the EB-5 program, immigrant investors can obtain a green card in exchange for a $500,000 investment in a development located in an economically depressed rural area. Each investment must result in the creation of 10 jobs.

But Stowe Aviation was able to attract just four investors to the project.

Barr says marketing for the project was hampered by allegations of fraud at Jay Peak Resort that surfaced in news reports published by VTDigger in 2014 and 2015.

The alleged fraud, considered to be the largest in the history of the national immigrant investor program, occurred under the watch of state officials who ran the Vermont EB-5 Regional Center.

The fraud at Jay Peak Resort allegedly began in 2008 when Quiros bought the ski area with investor funds that were supposed to be used for construction of a hotel. That was the beginning of an alleged Ponzi-like scheme in which the developers used money from future investors to backfill previous projects.

Despite red flags in 2012, state officials didn’t raise questions about the developers’ finances until the summer of 2014.

After the federal charges came down, Stowe Aviation officials could not get any information about why their project had stalled and what impact the Jay Peak fraud would have on their ability to solicit investors, said Tom Anderson, chief operating officer for the company.

Not long after, Stowe Aviation got into a dispute with the state over allegations of noncompliance with the EB-5 program. The issue was not resolved.

Barr says he now has no choice but to withdraw from the state-run immigrant investor program.

Stowe Aviation is the second company in the state EB-5 program to back away from the state regional center.

Last month, Peak Resorts, the owner of Mount Snow ski area, which continues to use the Vermont EB-5 Regional Center for a $52 million EB-5 funded project, announced the company will use a different regional center for another expansion at the resort in Dover.

Barr says the Vermont EB-5 Regional Center “no longer has any credibility with us or within the global EB-5 community, and certainly not amongst the citizens of Vermont.”

The Vermont Agency of Transportation, in stark contrast, he says, has supported Stowe Aviation’s development of the Morrisville-Stowe Airport. The state aviation division has helped Barr obtain federal and state funding for a runway extension and other improvements.

Barr accuses regional center officials of withholding information about a U.S. Citizenship and Immigration Services “investigation of the Vermont Regional Center that has been ongoing since July 2016.”

Barr says when he asked the state about the U.S. Citizenship and Immigration Services inquiry last summer, his inquiries were ignored.

In September, he sent a letter to Mike Pieciak, commissioner of the state Department of Financial Regulation, asking for an internal investigation into the regional center’s role in allowing the Jay Peak fraud to occur. Barr says his company has been hurt financially by the allegations about the Northeast Kingdom projects and the associated damage to the state’s reputation in the EB-5 program internationally.

Two weeks later, he says, officials at the department and the agency sent a “fraudulent” letter to Stowe Aviation on its intent to cancel the state’s agreement with the company, with officials at U.S. Citizenship and Immigration Services, and with a commercial lender that invested in the airport project.

Pieciak says his department has had ongoing discussions with Stowe Aviation related to compliance with U.S. Citizenship and Immigration Services policies. He declined to specify what problems were identified. “Beyond that I can’t comment,” he said.

Michael Schirling, secretary of the Agency of Commerce and Community Development, also declined to comment about the specifics.

Barr accuses the regional center and the department of engaging in “vindictive behavior against Stowe Aviation and our investors by improperly interfering with our private contracts, commercial funding and our investors’ path to citizenship.”

“We have responded with hundreds of pages of substantive documents that refute the baseless claims” by the Vermont EB-5 Regional Center and the Department of Financial Regulation, Barr says.

Months later, the state’s notice of intent to cancel the Stowe Aviation memorandum of understanding has not been finalized.

Barr says the state can’t back up claims that Stowe Aviation didn’t comply with the rules. “To this date, our (memorandum of understanding) has yet to be canceled because their allegations are completely baseless,” he said.

“What makes their actions even more egregious and malicious is that the Jay Peak MOU was never canceled in spite of their knowledge of wrongdoing dating back to 2012,” Barr said.

Barr sees himself as a whistleblower who has been retaliated against. If Gov. Phil Scott wants to restore the state’s reputation, Barr says he must establish an ethics commission and hire an independent investigator to ensure the state is “devoid of corruption.”

Barr says he believes a handful of “bad state actors” still employed by the state at the regional center “are responsible for irrevocably harming Vermont and its citizens.”

“We call on the governor to take swift action against this group of bad state actors and to begin a complete, transparent and independent investigation” into the Vermont EB-5 Regional Center,” Barr said.

Scott said it is “unfortunate” that Stowe Aviation is pulling out of the regional center.

The governor has said he wants to continue the EB-5 program in Vermont because he sees it as a valuable economic tool.

Scott said his administration has not discussed an internal investigation into potential wrongdoing by state officials, “but we will.”