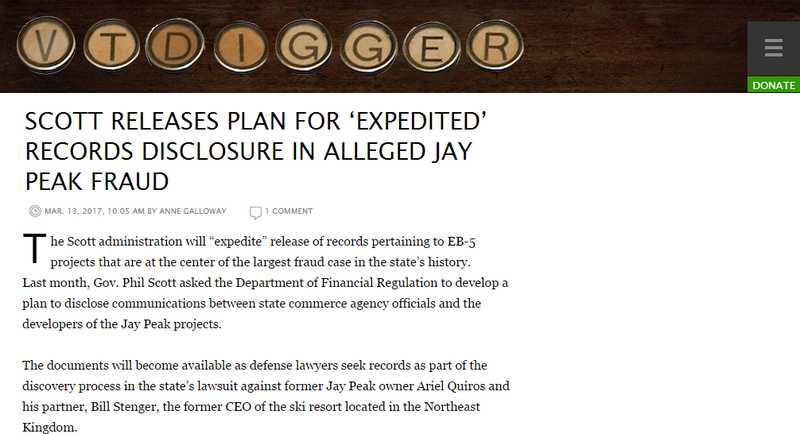 The Scott administration will “expedite” release of records pertaining to EB-5 projects that are at the center of the largest fraud case in the state’s history.

Last month, Gov. Phil Scott asked the Department of Financial Regulation to develop a plan to disclose communications between state commerce agency officials and the developers of the Jay Peak projects.

The documents will become available as defense lawyers seek records as part of the discovery process in the state’s lawsuit against former Jay Peak owner Ariel Quiros and his partner, Bill Stenger, the former CEO of the ski resort located in the Northeast Kingdom.

The records have been closed to public purview until now. The Vermont Attorney General withheld the documents from VTDigger, citing an exemption in the Vermont Public Records Act for relevant litigation. Bill Sorrell, the former AG, said the documents would be made available after the state’s lawsuit against Stenger and Quiros ended.

Scott has said it’s important for the public to have access to the records in order for his administration to “hit the reset” button on the Vermont EB-5 Regional Center program.

In a statement, Scott said the Jay Peak matter is “one of the largest alleged fraud cases in Vermont’s history and a matter of significant public interest, so I feel it is important to release documents in as timely a manner as possible.”

“I’ve advocated for transparency to restore faith and trust in government and in the EB-5 program, while also ensuring the release of information does not jeopardize the legal cases brought by the State or federal government,” Scott said. “Our top priority is to preserve the integrity of the legal process so the State can effectively enforce its laws.”

The plan, developed with the Vermont Attorney General’s Office, “dictates” that the Department of Financial Regulation “track the discovery process.”

As documents from the state are made available to the defendants, the state will file a motion with the court allowing public release of those records. If the court grants the motion, the documents will be disclosed.

Michael Pieciak, the commissioner of the Department of Financial Regulation, says the plan balances Scott’s “goals to inform the public on this important matter, with ensuring we uphold the integrity of the case.”

As a result, the records will be made available “in a matter of months” as opposed to as long as five years.

The discovery schedule for the state case has not yet been set. Once the records are released, they will be posted on the DFR website on a rolling basis through 2017.