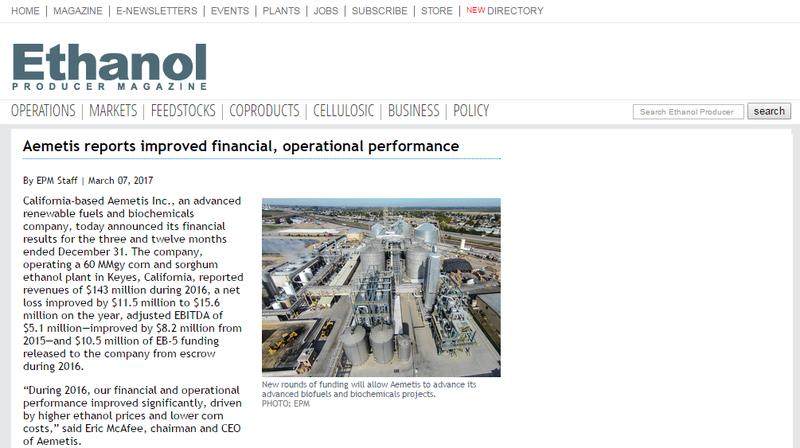 California-based Aemetis Inc., an advanced renewable fuels and biochemicals company, today announced its financial results for the three and twelve months ended December 31. The company, operating a 60 MMgy corn and sorghum ethanol plant in Keyes, California, reported revenues of $143 million during 2016, a net loss improved by $11.5 million to $15.6 million on the year, adjusted EBITDA of $5.1 million—improved by $8.2 million from 2015—and $10.5 million of EB-5 funding released to the company from escrow during 2016.

“During 2016, our financial and operational performance improved significantly, driven by higher ethanol prices and lower corn costs,” said Eric McAfee, chairman and CEO of Aemetis. “This improvement allowed us to reduce our net loss to $15.6 million and achieve an adjusted EBITDA of $5.1 million during the twelve months of 2016.

“Going forward, we expect that continued enforcement of the Renewable Fuel Standard will create a healthier supply and demand balance to support expanded investment in the biofuels industry. Growing ethanol exports have also had a positive effect on the market. As part of our Phase I EB-5 offering, 70 foreign investors funded $35 million at a 3 percent interest rate. In September 2016, we launched a Phase II $50 million EB-5 offering. The additional EB-5 funding will allow us to significantly reduce interest costs and fund projects in advanced biofuels and biochemicals that are expected to increase revenues, margins and earnings.”

Aemetis will host an earnings review call today at 11:00 am Pacific time.