Legislature starts to set the processes for future government investigations 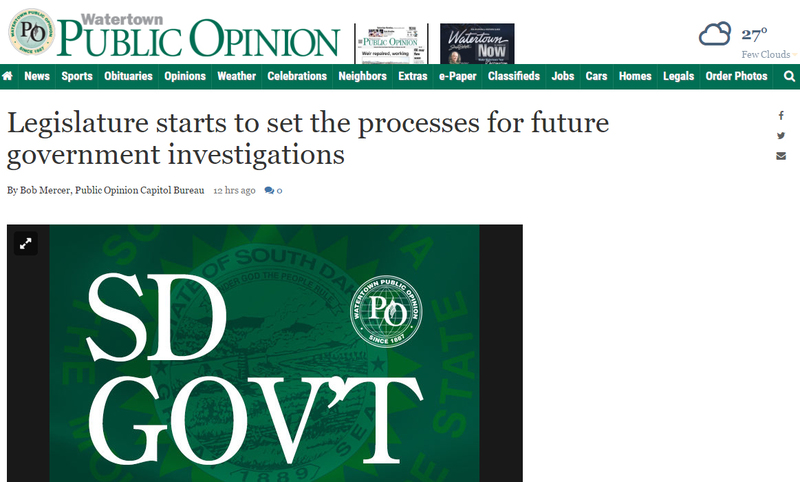 Rarely has a South Dakota legislator received praise in the way that Rep. Karen Soli did last week.

And rarely does a legislator work to get so many viewpoints and so much bipartisan support as Soli, D-Sioux Falls, did for a new state government accountability board.

She brought together Republicans and Democrats in the Legislature, received support from the governor and state attorney general and came up with a unique approach to have four retired judges or justices be the board’s members.

The House of Representatives voted 64-3 to approve the plan Thursday and sent it to the Senate for consideration.

Soli said state government hasn’t had an ethics committee to address concerns brought by the public.

The legislation, HB 1076, calls for the board to receive in confidence allegations of misdeeds by state officials and employees. If there was cause to proceed, the case would become public at that point.

The board would provide an annual report to the public. She said there would be safeguards for the accused because of confidentiality in the first stage of the process.

“I have to say that I truly wish this bill was not necessary,” Soli, a semi-retired Lutheran minister, told House members.

She acknowledged a new accountability board won’t necessarily prevent problems from happening but wrong-doers can be caught early and perhaps prevent further tragedy.

She was referring without specifically mentioning the seven people who have died from killings and suicides tied to the EB-5 and Gear Up scandals, and four others so far who have been accused or had pleaded guilty to felony crimes in connection to them.

“We owe it to the people of our state to do this,” Soli said.

No House member spoke against it.

For many, it helped recover some of the damage done earlier in the month, when the Republican super-majorities in both chambers voted to repeal Initiated Measure 22 that voters had passed in the November election.

IM 22 placed tight financial and gift restrictions on legislators and public officials,  including their immediate families, and on lobbyists. It created a public funding system for candidates and established an ethics commission to oversee campaign finance.

But Republican legislators successfully sued in December to get IM 22 suspended, in part because some of its features appeared to violate the state constitution.

Those features included the money appropriated for the campaign funding and setting the ethics commission as an independent body that wasn’t connected to any of the three branches of state government.

Many of the Republican legislators who filed the lawsuit said they would have to resign or their spouses would have to find different employment because of conflicts of interest.

Rep. Drew Dennert, R-Aberdeen, said during the House discussion on Soli’s bill that he promised when he voted to repeal IM 22 that he would work to find ways to respect the wishes of voters who had passed it.

“And I think this is part of that meaningful reform,” Dennert said.

The board’s four members would need at least a three-person majority for its decisions, with no more than two members of the same political party being part of that majority.

The governor would appoint the members to five-year terms. They could be removed only for just cause that is specifically detailed in the legislation.

Their scope of work would cover any person holding statewide office and employees of state government’s executive branch. They would look at allegations of misconduct in nine specific categories ranging from conflict of interest to misuse of public funds.

The board could refer cases to the state Division of Criminal Investigation for assistance and could open contested-case hearings where the person could present a defense against the allegations.

The board could issue a private or public reprimand, direct a person to take coursework or community service, or make a recommendation to the governor.

Public employees who filed allegations with the board would receive whistleblower protections, a feature that Rep. David Lust, R-Rapid City, worked with Soli to add during the House discussion.

Rep. Kent Peterson, R-Salem, called it “one more step in the puzzle of getting this thing put back together in the right way.”

The challenge for all of the reform proposals moving through the Legislature this session is that vigilance by the public is needed, said Rep. Steven Haugaard, R-Sioux Falls.

“Hopefully the word is out well enough in the state that they should be cognizant of things going around them,” Haugaard said.

Under SB 151, the secretary of state would receive authority to issue fines up to $500 for campaign violations.

And the legislation creates a clear path for public complaints about bribery, fraud and gift violations to be made to the Division of Criminal Investigation, and for DCI to refer matters for further administrative action if there isn’t a criminal case to be brought.

DCI could refer matters involving a legislator or legislative employee to the Legislature’s Government Operations and Audit Committee.

For matters involving candidates to the Legislature or statewide office, DCI would refer matters to the secretary of state.

And for matters regarding judicial officers, DCI would report findings to the Judicial Qualifications Commission.

"This is part of the attempt to recognize the concerns that were expressed at the ballot box last November," Curd told Senate members during the debate.

"Many of these mechanisms already existed but ability to access them have been somewhat opaque and difficult for folks to understand," Curd continued.

Criticism came from some senators such as Republican Lance Russell of Hot Springs, who said the real problem in state government is an “incestuous” situation.

Russell said then-Gov. Mike Rounds appointed Attorney General Marty Jackley in 2009 and it was up to Jackley years later to investigate problems under Rounds.

Russell indicated DCI, which is under the attorney general, was too close to situations and there needed to be some independence for investigations into state government.

"It's almost as if we're doubling down on what we're doing that isn't working," Russell said.

He called the ethics commission “the dangling object” in IM 22 that voters grabbed.

Sen. Brock Greenfield, R-Clark, asked senators for a vote of confidence in what the Curd bill attempts. Greenfield said to let it proceed.

"I believe we will do better should we be given that opportunity," Greenfield said.

Curd in closing commended Russell for identifying what his bill doesn't address. Curd said it's not an attempt to respond to EB-5 or Gear Up.

Curd agreed it's not in its final form but it's the first step of a two-part process, providing time to look at other states for what works there.

The Curd bill now moves to the House of Representatives while the Soli bill goes to the Senate.

The Curd legislation doesn’t have a House co-sponsor. Responsibility to carry it in the House could fall on Rhoden, who had the House kill his version of it.

Soli has bipartisan support in both chambers and her lead Senate co-sponsor is Greenfield, the Senate president pro tem.