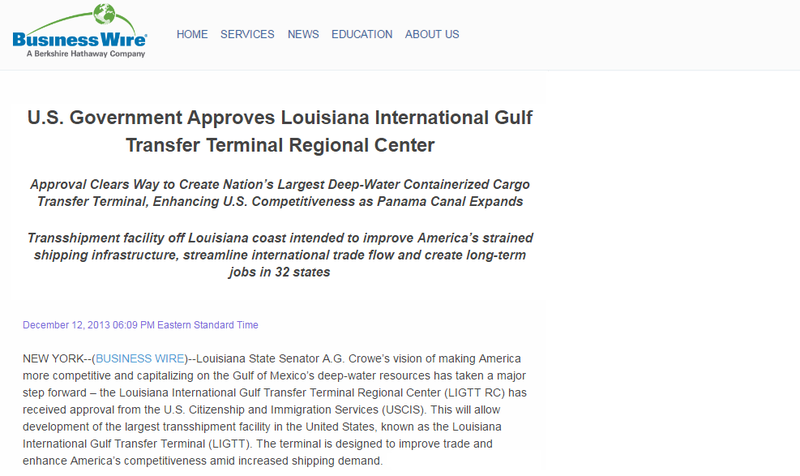 The terminal will be located just east of the mouth of the Mississippi River at Mile 0 off Louisiana’s Gulf Coast. Because of its location in deep water (at a minimum of 70 feet), it will be able to accommodate the massive ships known as Post-Panamax vessels that are expected to begin transiting the expanded Panama Canal. It will also be able to handle even larger ships known as Super Post-Panamax vessels currently in operation. The terminal will employ a hub and spoke system for transporting goods to and from America’s heartland, expanding America’s shipping capacity by more than 2 million twenty-foot equivalent units (TEUs) annually – with the goal of ultimately expanding capacity up to 3.5 million TEUs annually.

“This is a major infrastructure opportunity for this country. With this terminal in place, America will be ahead of the curve and able to keep pace with modern international trade, particularly as the Panama Canal undergoes its historic, first-ever expansion,” said Admiral James Milton Loy, former deputy secretary of the U.S. Department of Homeland Security and former commandant of the U.S. Coast Guard. “The Gulf of Mexico provides an ideal location to maximize shipping routes through other ports and inland waterways that until now have been largely untapped.”

Similar to the Louisiana Offshore Oil Port (LOOP), which serves as port of call for massive crude oil tankers too big for U.S. inland ports to offload oil, the terminal will be a transfer point for container vessels arriving from Asia and other regions, as well as for U.S. exports headed to foreign destinations. In support of the U.S. Department of Homeland Security (DHS)’s goal of ultimately screening 100 percent of all cargo entering the country, the terminal has set its own goal to have all arriving containers electronically screened by DHS. After screening, goods will be delivered to the Midwest and other ports in the Gulf and around the country via specially designed container-carrying vessels. These vessels, equipped with cranes, require just a 9-foot draft and travel upriver through the Mississippi River and its tributaries.

Economically hard-hit areas in Louisiana and Mississippi stand to benefit from the development and operations of the terminal. In particular, the project has established a target goal of filling approximately 25 percent of its available positions with U.S. military veterans (and/or their spouses). Veterans often face severe unemployment rates and other hardships once they leave the military.

“This project is projected to create tens of thousands of new jobs and generate tens of billions in revenue for the next century throughout the interior of the United States, benefitting 32 states and Canada,” said Louisiana State Senator A.G. Crowe, head of the LIGTT Port Authority Commission, which is overseeing the project. “It will add a third major port of entry to America’s heartland to complement the existing East and West Coast ports of entry.”

According to the most conservative economic studies, the terminal will generate approximately 180,000 direct and indirect jobs within 32 states, of which 34,000 will be in Louisiana over a multi-year period. This also includes jobs created through a multiplier effect across a broad supply chain, as the terminal is expected to increase demand for U.S.-made concrete, steel and other construction materials.

The terminal will increase America’s shipping efficiency at a time when the expanded Panama Canal is expected to introduce larger ships, which will hold up to four times the number of containers as current vessels. Ports that accept these massive ships require a minimum 50-foot draft to navigate and dock. The new terminal will not require expensive long-term labor-intensive dredging, which is common throughout the industry, because of its location in permanently deep water (70 feet minimum) and its ability to handle the new 18,000 container vessels. The terminal’s flexible design and initial 500-acre site allow for expansion as needed, as demand grows over time.

LIGTT’s central and strategic location in the Gulf of Mexico provides critical connections that will help vessels reach hundreds of inland waterway ports and destinations more efficiently and with less environmental impact from carbon emissions. Currently, America’s inland waterways transport just 2 percent of the nation’s containerized cargo. The U.S. Maritime Administration’s goal is to reduce wear and tear on our nation’s highways as well as take some of the strain off our rail systems by utilizing our massive waterways in the U.S.

“The need for smart solutions has never been greater as America’s existing infrastructure is strained and cannot sustain the upcoming shipping volume growth,” said John Vickerman, president of Vickerman & Associates, a port and intermodal planning and design firm. “This project represents a major milestone, positioning America to better capitalize on existing resources for transporting goods, while helping to reduce the impact on the environment.”

The terminal will increase the reliability and efficiency of the shipping process by enabling some cargo to travel to inland areas by LIGTT’s self-propelled specialized container-carrying vessels, moving along America’s internal waterway systems. It will also reduce the need for ships to idle because they will not have to wait for a berth slot; the terminal will be a world-class green-built facility.

This critical infrastructure project was envisioned by the LIGTT Port Authority Commission, which was created following the passage of Louisiana State Senate Bill 780, Act 699 – introduced by State Senator A.G. Crowe and signed by Governor Bobby Jindal in 2008. In a rare example of bipartisanship, the bill passed both the state’s House of Representatives and Senate unanimously, with no dissenters.

The project will be capitalized through the EB-5 immigrant investor capital program, along with other traditional forms of investment. The LIGTT Regional Center will adhere to strict guidelines for reporting corporate governance and disclosure information to the government and investors, communicating through quarterly reports to stakeholders, regular media releases and live webinar briefings.

Preconstruction work on the terminal began in November 2013.