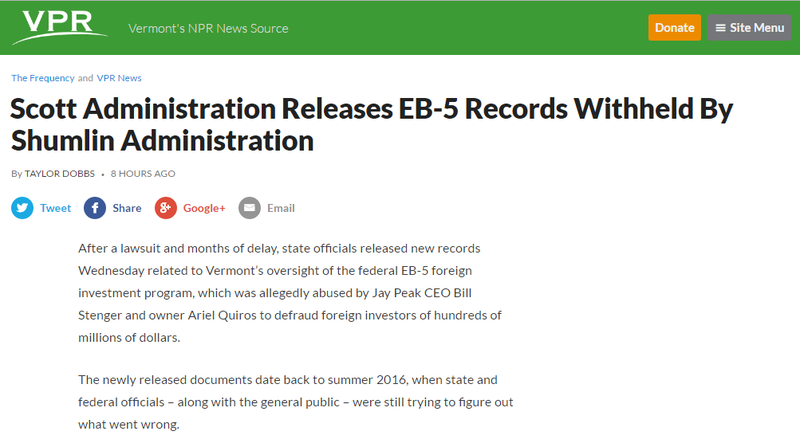 After a lawsuit and months of delay, state officials released new records Wednesday related to Vermont’s oversight of the federal EB-5 foreign investment program, which was allegedly abused by Jay Peak CEO Bill Stenger and owner Ariel Quiros to defraud foreign investors of hundreds of millions of dollars.

The newly released documents date back to summer 2016, when state and federal officials – along with the general public – were still trying to figure out what went wrong.

The Vermont Department of Financial Regulation released two of those documents Wednesday: One is from the U.S. Citizenship and Immigration Services (USCIS), which administers the EB-5 foreign investment program. Officials at USCIS were asking state officials to explain how the Vermont Regional Center, a state office responsible for oversight of EB-5 projects in the state, is overseeing projects. The second document is the state’s responses to USCIS questions.

The EB-5 program offers permanent U.S. residency to foreign investors in exchange for a job-creating, $500,000 investment in a qualified project. Before USCIS provides investors residency papers, the agency first has to verify that the investment was used to create jobs as described. Fraud allegations in the Northeast Kingdom raised doubts about where investor money went, and whether the investments did indeed create jobs, and USCIS asked the state to address those concerns.

State officials initially refused to publicly share the USCIS request for information as well as the state’s response. Wednesday, the Department of Financial Regulation posted them on its website.

The non-profit news organization VTDigger sued the state for the records in 2016 after officials refused to release them in response to a public records request. VTDigger dropped its case last week. VTDigger reported Wednesday that the state is working on a plan to release more EB-5 records soon.

Wednesday’s document release signals a change in position for the state, which initially claimed that the records should not be public because they could influence the state’s pending lawsuit related to the fraud allegations. As VTDigger reported, that seems to have changed under Gov. Phil Scott, who took office in January.

In an interview Wednesday, Commissioner of Financial Regulation Mike Pieciak said the state hasn’t heard anything back since officials responded to USCIS questions last year. Since then, he said USCIS approvals of EB-5 funding related to other projects show that the state’s responses satisfied USCIS concerns.

“That would indicate to me that the Vermont Regional Center is operating business as usual in relation to USCIS at this point,” Pieciak said.