VTDigger Takes Open Records Fight From Court To The Legislature 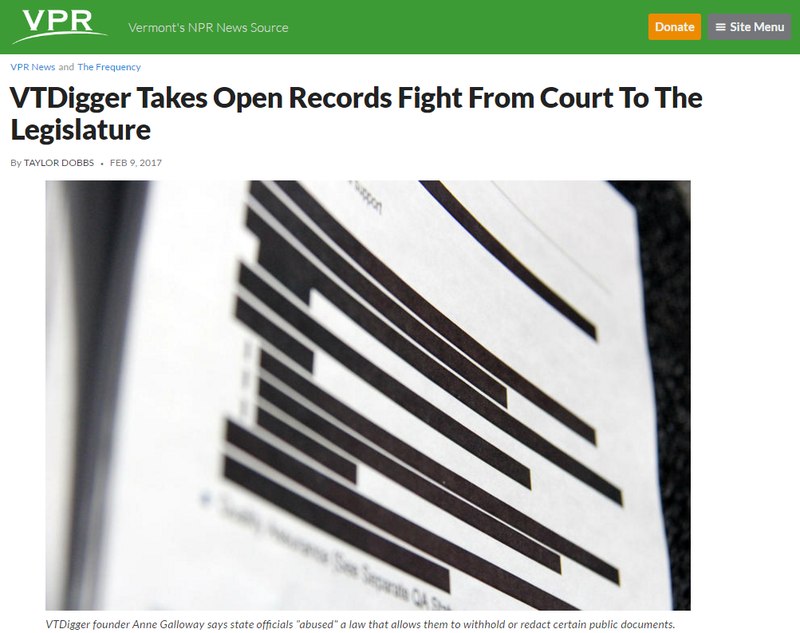 VTDigger, the non-profit news organization based in Montpelier, has dropped its legal campaign to force state officials to disclose records about how the state managed its oversight of the federal EB-5 foreign investment program.

Now the organization’s founder says she plans to advocate for a change to state law that would make records more accessible to the public.

The EB-5 Regional Center is a Vermont state office within the Agency of Commerce and Community Development. Its staff is responsible for the oversight of developments funded by the federal EB-5 program, which provides permanent legal residency to foreigners who invest $500,000 in job-creating projects in economically-depressed regions.

“The reason we sought this information was because we were aware that the Agency of Commerce and Community Development had been asked by the federal government to explain what had happened at Jay Peak,” Galloway said, “and we wondered whether the EB-5 regional center was going to continue to operate, because in another state where there have been issues that have come up, the EB-5 center [in that state] was closed.”

The state claimed that officials were not legally required to release the records because of “pending litigation.” State law exempts records from public scrutiny if they are related to an ongoing legal proceeding, but Galloway says officials “abused” the law in this case.

After the news organization filed a lawsuit against the state, officials released some records.

“There were many pages that were redacted, and a number of those pages were related to the Jay Peak allegations of fraud, and so we continued on because we wanted to know what the state’s response was to the feds,” Galloway said.

Whatever the state’s response was when federal authorities inquired about the fraud allegations, Galloway said VTDigger’s lawsuit will not uncover it.

“We ended up agreeing to a decision to dismiss the case because we are not able to fight the 'relevant litigation' exemption,” Galloway said. “The exemption is so broad and it pertains in this case even though the state is not being sued, and even though we believe that the documents are not relevant [to litigation] because the state is suing Quiros and Stenger.”

Galloway says the records will become public once legal proceedings related to the state’s case against Quiros and Stenger are over, but that could take years. She argues that officials were not using the “litigation hold” exemption of the state’s public records law for its intended purpose.

“They have an interest in finding out what Quiros and Stenger did, and it just isn’t reasonable to expect that the developers would be using these documents in their lawsuit, because the state didn’t perpetrate the alleged crime,” Galloway said. “The allegations were against Quiros and Stenger, so we just don’t think the argument is valid.”

To that end, Galloway said VTDigger plans to call on lawmakers to narrow the exemption in law that allowed state officials to keep Vermonters in the dark about how state agencies handled the alleged fraud.

"I think that journalists absolutely should advocate for open records and open government. I mean, that's part of our obligation, I believe, in helping to protect the First Amendment." - Anne Galloway, VTDigger founder

“At this point, we’re looking at a change in statute,” Galloway said. “And my understanding is that the House Government Operations Committee, which is led by [Rep.] Maida Townsend, is not really particularly interested in taking this up again because they have been working on changes to the public records act for several years. We believe it’s crucial to address this problem.”

Typically, journalists refrain from participating in advocacy in an effort to prevent accusations of bias or conflicts of interest, but Galloway says this kind of advocacy is part of the job.

“I think that journalists absolutely should advocate for open records and open government,” she said. “I mean, that’s part of our obligation, I believe, in helping to protect the First Amendment.”

Galloway says that even though Vermont’s public records law isn’t part of day-to-day life for most Vermonters, it has big implications for the state, and for the way people understand government.

“And that’s the problem here: We don’t know the scale of this thing. We don’t know what went wrong, when, and why,” Galloway said. “And without the records, we’ll never know.”