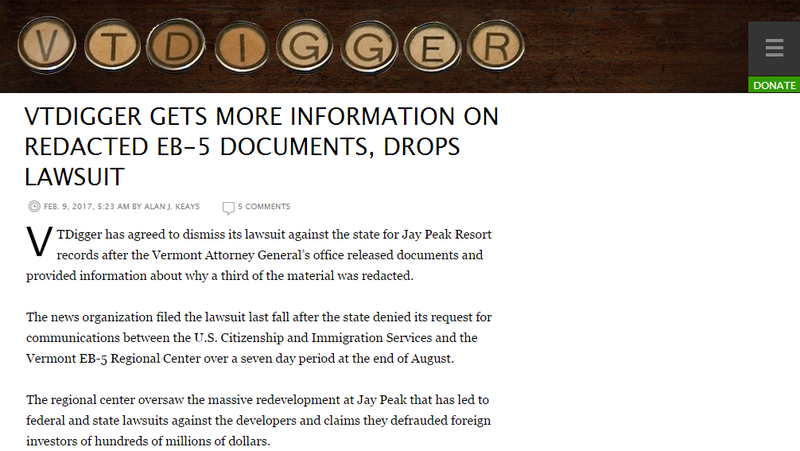 VTDigger has agreed to dismiss its lawsuit against the state for Jay Peak Resort records after the Vermont Attorney General’s office released documents and provided information about why a third of the material was redacted.

The news organization filed the lawsuit last fall after the state denied its request for communications between the U.S. Citizenship and Immigration Services and the Vermont EB-5 Regional Center over a seven day period at the end of August.

The regional center oversaw the massive redevelopment at Jay Peak that has led to federal and state lawsuits against the developers and claims they defrauded foreign investors of hundreds of millions of dollars.

The dismissal of the public records lawsuit follows the recent filing by the state of a Vaughn Index, or general description of redacted information.

The redacted information is contained in a 131-page document the state provided to VTDigger in November, about a month about the news organization brought the lawsuit and roughly three months after the initial request.

“We felt that this was the best result that we could obtain,” Cornell said Wednesday of the reason for dismissing the case.

“By requiring the state to give us a summary of the documents they are withholding it is a fair compromise between giving us the information we sought and their rights under the litigation exception to the Public Records Act,” he said. 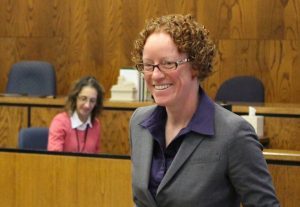 Lia Ernst, a lawyer with the Vermont chapter of the American Civil Liberties Union.

Lia Ernst, an attorney with the Vermont chapter of the American Civil Liberties Union and Cornell’s co-counsel in the case, agreed, adding that the matter likely could have been resolved much quicker with greater explanation of the redactions by the state earlier on.

“Rather than having to go through a litigation process to get the records that Digger was entitled to at the outset,”Ernst said, “agencies really ought to be working cooperatively with records requesters.”

Anne Galloway, the editor of VTDigger and the executive director of the Vermont Journalism Trust, says the state has delayed or blocked release of EB-5 records over a nearly three year period.

“The lawsuit was part of our effort to get to the bottom of what the state knew when about the alleged fraud at Jay Peak,” Galloway said. “We believe the state is using the ‘relevant’ litigation exemption as a shield to prevent the public from understanding why officials failed to provide adequate oversight of the Jay Peak Projects.”

At the end of December, Galloway asked for all EB-5 records that had not yet been provided to VTDigger. The Vermont Attorney General’s office told the news organization that the request would result in 50,000 records and would cost $200,000. Galloway made the sweep request because officials had indicated that the outgoing Shumlin administration planned to submit pre-redacted EB-5 records to the state archive — not the originals. Ultimately, the governor agreed to give the state archivist unredacted copies of the documents.

Assistant Attorney General Jon Alexander, who represented the state in the case, could not be reached Wednesday for comment. The state had recently filed a motion seeking summary judgment, arguing all the redactions were justified under the litigation relevance exemption. Alexander asked the judge to rule in its favor on all claims.

It appears that EB-5 records now will not be released until the state lawsuit is resolved. It could be years before that happens as a trial date in the state case has not yet been set. The federal case will not begin until September 2018.

The state-run regional center oversees the EB-5 program in Vermont and was responsible for supervision of the Jay Peak Resort projects led by owner Ariel Quiros and Bill Stenger, the resort’s former president.

State and federal lawsuits brought in April accuse the two men of perpetrating a “Ponzi-like” scheme, misappropriating $200 million of the roughly $350 million they raised through the federal EB-5 immigrant investor program.

The news organization brought its lawsuit in October after the state initially refused to provide documents related to an inquiry by the U.S. Citizenship and Immigration Services of the Vermont EB-5 Regional Center. The state cited an exemption to Vermont’s Public Records Act for documents “relevant” to litigation.

Then, in November, after VTDigger sued, the state reconsidered its earlier denial of the records, citing a change in circumstances. In September, two Chinese investors in the Burke Mountain hotel project headed by Stenger and Quiros dropped a lawsuit against the state Department of Financial Regulation, among other parties.

The state released a 131-page package of documents with the redactions. It contained little new information other than the EB-5 regional center was operating under a new oversight structure, as had previously been reported.

Allen Gilbert, former longtime executive director of the ACLU of Vermont, said Wednesday that the matter of the “relevant” to litigation exemption to the state’s public records act has been the subject of debate over the years.

Gilbert, who is not involved in the VTDigger case, said in 2014 the ACLU of Vermont testified about the exemption before a legislative study committee looking at Vermont Public Records Act.

“We thought the exemption was overbroad, unnecessary and should be repealed,” he said, adding the committee never advanced any changes to the exemption.

He said the ACLU of Vermont’s proposal was that once a matter went to court, it would be up to a judge to make a determination, based on requests from parties involved in the litigation, whether to seal a document.

Unless one of the parties involved in the litigation seeks to seal a document, he said, the record would be public. “It resets the default,” Gilbert said.

Gilbert said the Vaughn Index is a very useful tool, and should be provided whenever redactions are made in response to a public records request.

The Vaughn Index filed late last month in the VTDigger case shows that the state withheld in whole, or in part, 16 of the 131 pages in the document, citing the exemption, “relevant” to litigation, specifically the state’s case against Quiros and Stenger.

Thirty-four redacted pages in the 131-page document provided by the state don’t deal with Quiros, Stenger, or Jay Peak at all. Instead, many of the redacted pages, according to the Vaughn index, involve the now-closed Seldon Technologies, a water filtration device maker that had been based in Windsor and raised money through the EB-5 program.

While the Vaughn Index sheds light on what the state is withholding and why, much of the information regarding Stenger, Quiros and Jay Peak appears to already be a part of the public record, either through filings in the federal lawsuit brought the U.S. Securities and Exchange Commission, the court-appointed receiver or other pending civil lawsuits that have since brought by investors against Stenger and Quiros.

For example, the Vaughn Index states two pages had been redacted because they contain the Agency of Commerce and Community Development’s “discussion of the real estate development activities, construction budgets, financing, ownership arrangements and legal structure associated” with projects at Jay Peak.

A great deal has been reported on those matters, particularly the ownership and financing associated with Quiros and Stenger EB-5 projects, based on court records since the filing of the state and SEC lawsuits in April.

The Vaughn index does show that three pages of redactions deal with the state interactions with EB-5 investors in projects headed by Quiros and Stenger.

“The redacted information is also VACCD’s discussion of when and how the State of Vermont first became concerned about Quiros’ and Stenger’s potential misuse and misappropriation of EB-5 investor capital, particularly with respect to the Burke and Jay Peak Biomedical projects,” the filing adds, “as well as the nature and timing of pre-suit investigatory activities and regulatory oversight actions undertaken by the State of Vermont in response to these concerns.”

The matter of what the state knew when is “relevant” to litigation and should not be released, the Vaughn Index states, because Quiros and Stenger intend to raise defenses that some of the allegations against them are outside the statute of limitations.

The Vaughn Index shows the submission to USCIS includes a timeline of what the state knew when. Just when the state “first became concerned” about the EB-5 funded projects led by Quiros and Stenger has not been entirely clear.

It was in April that the state and federal lawsuits were brought against Quiros and Stenger. And it was about a year earlier, in 2015, that officials have said the state opened its investigation, when federal authorities were already a year into their probe.

However, according previous VTDigger reports, state officials ignored warnings much further back in time.

Douglas Hulme, owner of the EB-5 consulting firm Rapid USA Visas, had contacted state officials in May 2012, public records obtained by VTDigger show, and challenged the business practices that became part of the allegation the Securities and Exchange Commission brought in its federal lawsuit in April.

Emails among Hulme, Stenger and Lawrence Miller, then secretary of the commerce agency, show officials didn’t act on Hulme’s warnings, but instead sought to discredit his company.

The proposed $110 million biomedical research center in Newport and the hotel at Burke Mountain were among the last by Quiros and Stenger in a series of EB-5 funded projects.

The biomedical research center never materialized and the Burke hotel was built, though amenities at the resort, including an aquatics center, were pulled from the plans. Other earlier EB-5 funded projects involving the expansion of Jay Peak ski resort, including a new water park and hotel, did come to fruition.