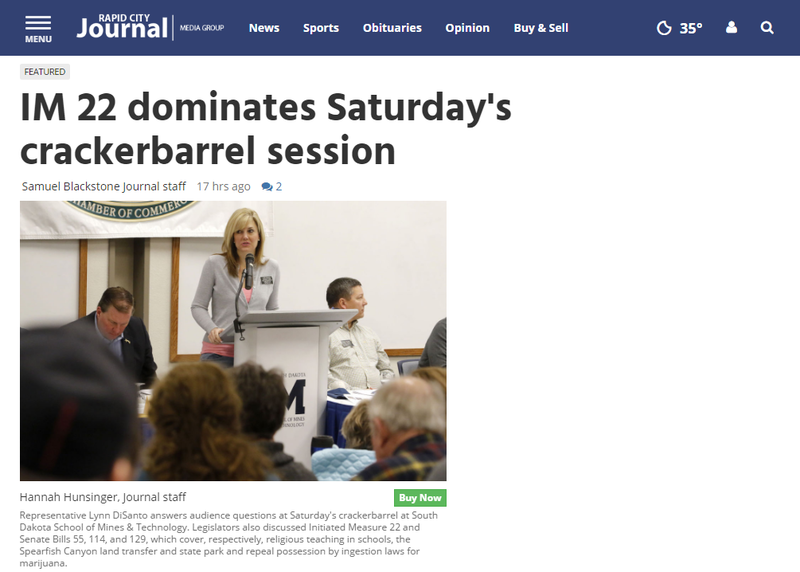 Initiated Measure 22 may have been officially wiped from the books on Thursday, but that doesn't mean people are done talking about it.

IM 22 was repealed Thursday when Gov. Dennis Daugaard signed the measure dismantling the referendum that the South Dakota Legislature had passed a day earlier. Approved by voters in November, IM 22 proposed new ethics regulations, including lowered campaign contributions, increased campaign reporting requirements, a system to publicly finance elections and an ethics commission to oversee all the reforms.

State Sen. Jeff Partridge, Rep. Lynne DiSanto and Rep. Tim Goodwin addressed the bill and surrounding controversy at the meeting's outset, centering on the Legislature’s dismantling of a bill that was supported and passed by public referendum in November.

“To those that are frustrated with the possibility of changing it or reworking it, welcome to the process,” Partridge said to a crowded room of citizens. “This is what we do. We always have amendments throughout the year, we always have bills that get struck down, we always have changes.”

DiSanto thought the decision to vote “yes” to repeal the bill was simple.

“It just really was a very black-and-white issue when the facts, not the rhetoric, not the emotion … was all taken away,” DiSanto said, mentioning a clause that prohibited anyone employed by a business with links to lobbyists from participating in the state Legislature.

Later in the meeting, Helen Usera, a Chamber of Commerce Board of Directors member and the meeting’s moderator, opened the floor to all representatives and senators in attendance to address IM 22.

“We’re regular people that run (for office) because we’re concerned,” she said, blaming the GEAR UP and EB-5 scandals for causing voter distrust of public officials and the ensuing public approval of IM 22. “Those problems were under the executive branch.”

Rep. David Lust said IM 22 was “terrible,” “poorly crafted” and a “poor strategy,” but said he voted against repealing it.

“It is not the legislator’s job to decide what is constitutional and is not constitutional,” Lust said to applause. “It’s called separation of powers. That is the judiciary’s job to determine … The reason I voted against it (the repeal measure) is the manner in which it is being repealed.”

State Sen. Kevin Killer agreed it should have been settled in the court system, and Rep. Craig Tieszen said he supported replacing the bill before repealing it.

Partridge, DiSanto, Lust and others preached patience and told voters that reform bills in line with voters' expressed concerns in IM 22 will be passed before the legislative session is over.

“I think you should judge the Legislature not where we sit right now, but how things stand at the end of session,” Lust said.

Three components that need to be addressed, Lust said, include limits on lobbyist gifts, campaign finance reform and the creation of an ethics commission. Lust did say that the system of publicly financed campaigns was not something he had heard much support for, from constituents or other representatives.

State Sen. Phil Jensen, Rep. Blaine “Chip” Campbell, Rep. Julie Frye-Mueller and Sen. Lance Russell held their own crackerbarrel, across the hall from Didier Educational Center concurrent to the “official” crackerbarrel, in protest of the new format. The alternative crackerbarrel followed the old format for public input, in which citizens can pose questions directly to legislators. The new format, first implemented in the last crackerbarrel meeting, requires citizens to hand in written questions, which are then posed by a moderator.

“I want to be able to talk directly to the person asking the question,” Frye-Mueller said, explaining why she attended the alternative meeting rather than the chamber-sponsored crackerbarrel across the hall. “Everybody was engaged. Nobody felt like they were left out or anything. I actually think everybody liked this better.”

Campbell said the new format was just one reason he chose to attend the alternative meeting.

“The biggest issue for me was the fact that the chamber did not include legislators in the process,” Campbell said of the format change. “And we’re a part of the process.”