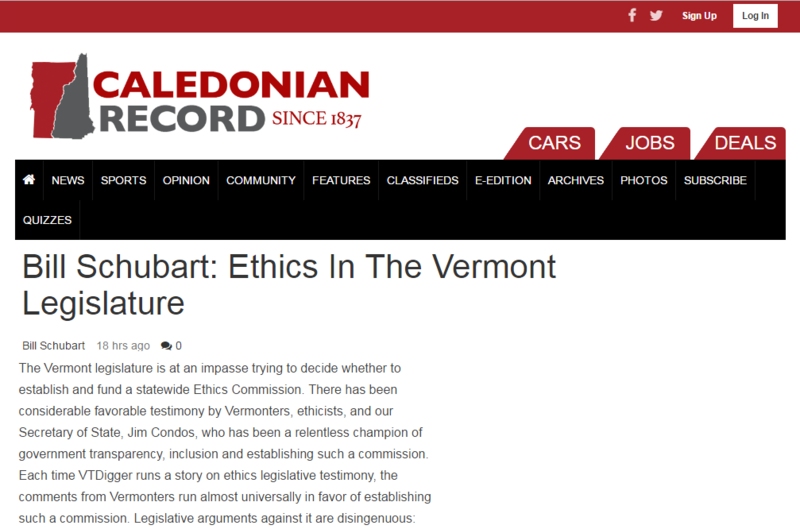 The Vermont legislature is at an impasse trying to decide whether to establish and fund a statewide Ethics Commission. There has been considerable favorable testimony by Vermonters, ethicists, and our Secretary of State, Jim Condos, who has been a relentless champion of government transparency, inclusion and establishing such a commission. Each time VTDigger runs a story on ethics legislative testimony, the comments from Vermonters run almost universally in favor of establishing such a commission. Legislative arguments against it are disingenuous:

• What if an Ethics Commission ran amok and looked for self-serving behavior where there was none?

• An Ethics Commission would not have prevented any of the recent malfeasance. Etc.

While we are mostly good people, we’re also fallible. We’ve seen a spate of recent embezzlements in the municipal sector. We’ve seen government officials pirouette from their office to earn more working for those they oversaw. Our Senate has just seen a dismal sexual scandal among its own. The EB-5 Jay Peak scandal is the largest in our 225-year history and one of the largest in the SEC’s own history.

As a commentator who occasionally addresses ethical issues, I was asked to testify in Senate Government Operations and was further asked there how an Ethics Commission could have been prevented the $200M fraud perpetrated on 836 investors from 74 countries. I responded by suggesting that had we had a real Ethics Commission, the immigration lawyer working on behalf of suspicious investors in 2014 would have had a place to go to ask for help. At first, the State denied any responsibility and the scandal metastasized. Two governors, a senator and an agency secretary might have been warned not to represent that the investors’ funds were being audited appropriately by the State agency that was, at that time, also charged with promoting the program. The following year, the State learned that the SEC was waist-deep into an examination of massive fraud.

The Center for Public Integrity ranks Vermont 50th of all states on ethical enforcement. An effective Ethics Commission backed by an ethics canon is foremost a metaphorical conscience, secondly a practical resource for those elected to serve Vermonters, and lastly an enforcer of its guidelines. Like most preventative actions, it would also pay for itself many times over. Can we honestly say that in the myriad State contracts and employee expense vouchers there is no self-dealing? The cost of defending or remediating ethical lapses certainly exceeds the cost of an effective Ethics Commission.

Many Vermonters have spoken up supporting an Ethics Commission, but their elected legislators are waffling. The current bill S.8 largely ignores what Vermonters are asking for but provides legislative cover for inaction. It calls only for a part-time director and someone in Human Services to draft ethical guidelines. There’s no enforcement capacity. Malfeasance is referred to the Senate or the House for peer action, even though they’ve not fared all that well historically in policing themselves.

An Ethics Commission should not cost more than $300,000, a small price to pay to ensure Vermonters that their elected officials are serving them and not themselves. It must have jurisdiction over the legislature and executive branches as well as elected municipal officials. It should have investigative and prosecutorial authority, referring criminal matters to the Vermont State Attorney’s office.

In a time of widespread citizen mistrust of their government institutions, what could be more important than re-establishing that trust?

Bill Schubart, of Hinesburg, is among many things author of the Lamoille Stories and commentator for Vermont Public Radio.