Despair and Anger as Puerto Ricans Cope With Debt Crisis

It’s the lunch hour at Baker’s Bakery, a fixture in Río Piedras, one of Puerto Rico’s oldest neighborhoods, but the bustle at the counter is long gone. The front door opens and shuts only a few times an hour as customers, holding tighter than ever to their money, judiciously pick up some sugar-sprinkled pastries and a café con leche.

On the first day of the new sales tax, which jumped to 11.5 percent from 7 percent, the government’s latest rummage for more revenue, Puerto Rico’s malaise was unmistakable.

“People don’t even answer you when you tell them, ‘Buenos dias,’ ” said Ibrahim Baker, 55, on Wednesday as he stood at the cash register of the bakery he has owned for 25 years. “Everyone is depressed.”

After nearly a decade of recession, Puerto Rico’s government says it cannot pay its $73 billion debt much longer. Gov. Alejandro García Padilla warns that more austerity is on the way, a necessity for an island now working feverishly to rescue itself. With so many bracing for another slide toward the bottom, the sense of despair grows more palpable by the day. 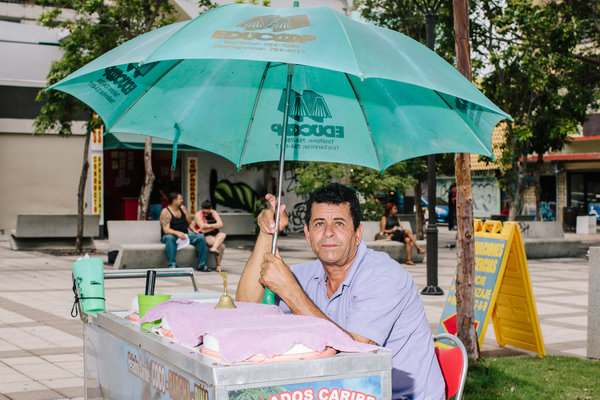 “So many people are leaving you can’t even find suitcases,” said Erica Lebrón, 30, as she sat outside a housing project bodega.

Before long, Puerto Ricans will face more tax increases — the next one is in October. Next on the list of anticipated measures, these for government workers, are fewer vacations, overtime hours and paid sick days. Others in Puerto Rico may face cuts in health care benefits and even bus routes, all changes that economic advisers say should be made to jump-start the economy.

People ricochet from anger to resignation back to anger again. Along San Juan’s colonial-era streets, in homes and shops, Puerto Ricans blame the government for the economic debacle. Election after election, they say, political leaders took the easy way out, spending more than they had, borrowing to prop up the budget, pointing fingers at one another and failing to own up to reality.

“It’s very, very, very worrisome,” said Mr. Baker, who added that he wanted the federal government to oversee the rescue plan because “in the hands of Puerto Rico’s politicians, this will never get better.”

For Mr. Baker, each year has been worse than the one before. He first opened his business here 25 years ago, not too far from the University of Puerto Rico. At one time, 23 employees served up pasteles and tortas. Now he has one worker, and his daughter, a recent college graduate who cannot find a job, also works behind the counter. Sales have plummeted 50 percent and, over the years, he has been forced to close two other businesses.

Taxes continue to go up. But so do other costs. Living on an island, many business owners must ship their goods in from a mainland port, already a costly proposition. But a 1920 law, the Jones Act, which requires Puerto Rico to receive its shipments from the United States on American-built ships with mainly American crews, makes the cost of transporting goods even more expensive. Recently, it got costlier, Mr. Baker said.

Now there is a chorus of calls for Congress to relax the law as it relates to Puerto Rico. And some powerful Democrats are rallying behind the idea of granting Puerto Rico, a commonwealth, the ability to file bankruptcy for some of its debt-laden agencies.

“I have to pass some of these costs on to customers,” Mr. Baker lamented, a tray of bread at the ready and an espresso machine churning in the background. For example, the price of ham, he said, recently increased for him to $2.39 a pound from $1.19 a pound because of shipping costs. “So we have fewer customers. Some months nothing is left over for us after we have paid the bills.”

The high cost of electricity and water in Puerto Rico also make running his bakery, and paying his bills at home, all the harder. “I am stuck here because I have no alternatives,” he said. “I don’t have the opportunity now to even try.” 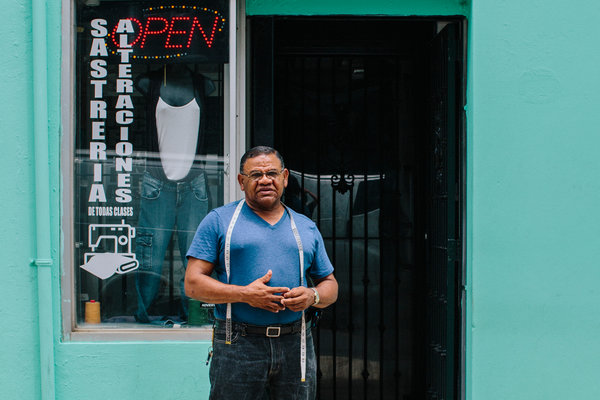 Porfirio Guerrero waited for customers outside his tailor shop in Río Piedras on Thursday. Thirty stores on his street have closed in the past 10 years or so.CreditChristopher Gregory for The New York Times

Many others in Puerto Rico, including a stream of professionals and middle-class workers, have sought alternatives. They have moved to the mainland for jobs and better prospects. Over the past decade, Puerto Rico has lost more than 5 percent of its population, which now numbers 3.6 million, according to a New York Federal Reserve report. An additional 250,000 people are expected to leave by 2020, according to the Puerto Rico Planning Board.

This year, the government closed dozens of schools across the island. About 40 percent of the island’s municipalities now have more old people than children, which means fewer workers in the pipeline and a greater need for benefits like Medicare.

A few blocks from the bakery, Paseo de Diego, a pedestrian corridor once buzzing with shops and shoppers, sits nearly empty. Store after store has closed, their metal grates covered in graffiti, except for a stretch near a busy market.

With his hats for sale on a display on the grates of a closed store along the Paseo, José Vasquez Torres, 67, said business was more than slow. “I’ve been here since 6 a.m. and not sold a single hat.”

Sitting on a folding chair next to the hats, his partner, María L. Luyando Hernandez, 62, held a thick sheaf of papers. Even a business as small and mobile as this one, she said, requires paperwork, payments and permits.

“These are all the papers we have to fill out to sell hats here,” she said. The couple owe $461 for the permit but they do not have the money. Not too long ago, the cost of a permit, Ms. Luyando said, was $21. Some sellers were able to take out loans at inexpensive interest rates to keep their businesses going, but Mr. Vasquez said he did not qualify because he had failed to pay his phone bill.

Despite a growing stack of unpaid bills, the couple manage to get by, Ms. Luyando said, because they live in affordable Section 8 housing — a small one-bedroom apartment nearby — and receive food stamps.

“We are behind,” she said, “we are always behind.”

Far more people use food stamps here — 35 percent — than on the United States mainland, a reflection of Puerto Rico’s poverty rate of 41 percent, nearly double that of the poorest state, Mississippi. And about 60 percent are enrolled in Medicaid or some form of Medicare.

A health care crisis now looms. The federal government plans to cut Medicare Advantage, a popular private program run with Medicare funds, by 11 percent next year, a reduction that has already triggered rallies and protest.

Angel Ramon Rivera, 57, a friend of Mr. Vasquez, the hat seller, recently received some training as a sound engineer and is working as a D.J., charging small amounts because no one can afford more. Like many in Puerto Rico, he is part of the underground economy, which makes it easier for him to do business but harder for the government to collect taxes. But the work is sporadic and he, too, collects food stamps. He is saving his money to get out of Puerto Rico.

As he talks, his anger bubbles up. “They want us to pay for their mistakes,” Mr. Rivera said, of the lawmakers. “This is not our fault. And they shouldn’t raise taxes on the rich, either. It’s not their fault. It’s the fault of the legislature.”

Mercedes Martinez, the new head of the Teachers Federation of Puerto Rico, said the deepening crisis and calls for more austerity will once again hit the working class.

“We all have to sacrifice but workers have already sacrificed too much,” she said of the sales tax, layoffs and pension cuts. “We are not willing to make one more sacrifice. The ones who need to sacrifice are the people who created this.”

“We will throw ourselves into the streets, if we have to,” she added.

Leaning against a lamppost near the Paseo, his measuring tape around his neck, Porfirio Guerrero, 61, said he feels drained.

Sastrería Pachín, the tailor shop he owns, used to offer him a good life. Now he lists his troubles in numbers: His water bill, made worse by a drought here, has gone up to $64 a month from $21, and he barely uses water. Thirty stores on his street have closed in the past 10 years or so. It is 11:30 a.m. and not one customer has stopped in.

“Before, I went to the movies, I drank some beers with friends,” he said. “Now I go from the business to my home. That’s it. It’s suffocating.”

He arrived here from the Dominican Republic 28 years ago — “a lifetime ago” — and worked hard to build a life. He succeeded, against hard odds, not always easy for Dominicans, who sometimes face discrimination here.

“I guess the government thinks that because we have jobs, we are fine,” Mr. Guerrero said. It’s not that simple, he added, gesturing toward the empty street. “I just look down there and want to cry. We feel like we are a forgotten people in a forgotten land.”