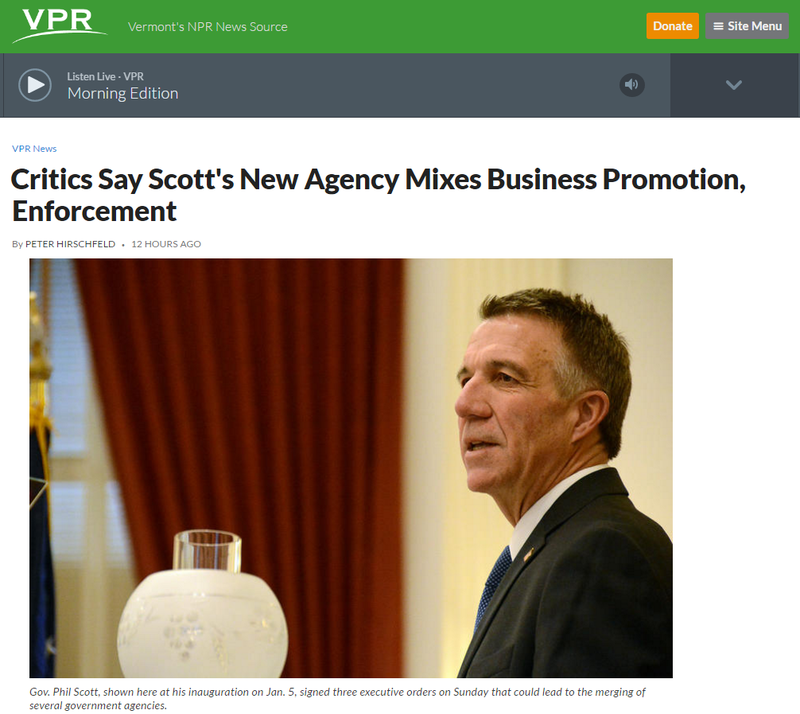 Some Democratic lawmakers are expressing skepticism over a plan from Republican Gov. Phil Scott to merge the Department of Labor and the Agency of Commerce and Community Development.

During his campaign for governor, Scott vowed to overhaul state government. He began that process over the weekend by signing three executive orders that would reorganize some key government agencies.

Among them is an order to move the Department of Labor into the Agency of Commerce and Community Development. Scott already has a name picked out for this newly merged entity, and he says the "Agency of Economic Opportunity," as he calls it, will do a better job training out-of-work Vermonters for good-paying jobs.

The Agency of Commerce and Community Development exists to promote and strengthen businesses; the Department of Labor was created to help workers. Scott says unifying the two will enable more effective oversight of the hodgepodge of workforce programs that are now scattered across state government.

"Right now there is a disconnect between the size and skills of our workforce, and the needs of Vermont businesses." — Gov. Phil Scott

“Right now there is a disconnect between the size and skills of our workforce, and the needs of Vermont businesses,” Scott said.

The Department of Labor, however, is also responsible for making sure that Vermont businesses are in compliance with state labor laws. And Senate President Pro Tem Tim Ashe says there’s concern that the missions of business promotion and business enforcement are inherently at odds, and don’t belong in the same agency.

“The concern that’s been raised is the same concern that was raised with the way we managed EB-5 in the past, where you had an agency that was both promoting an activity but was also responsible for regulating it," Ashe says.

Phil Scott says it won’t be a problem.

“We don’t see that that’s an issue,” Scott says. “They’re still going to have to answer to someone. We’ll protect the rights of Vermonters and workers.”

Scott has also proposed a plan to dissolve the Department of Information and Innovation, which oversees IT projects, and replace it with an “Agency of Digital Services.” Scott says the plan would give the state a more unified organization structure for IT projects.

Scott also wants to merge the Department of Liquor Control and the Lottery Commission.

Ashe says it’s the Labor/Commerce merger that will likely generate the most scrutiny.

Lawmakers have 90 days to block the executive orders.