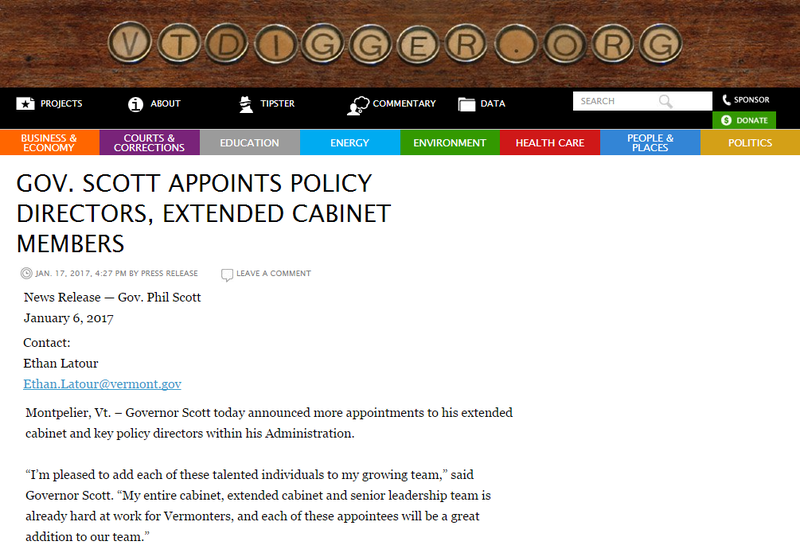 “I’m pleased to add each of these talented individuals to my growing team,” said Governor Scott. “My entire cabinet, extended cabinet and senior leadership team is already hard at work for Vermonters, and each of these appointees will be a great addition to our team.”

Michael Snyder has been reappointed Commissioner of Forest, Parks & Recreation. Snyder has served as Commissioner of the Department since January 2011. Prior to that he served for 14 years as Chittenden County Forester, providing land stewardship assistance to private landowners and municipalities. For 12 years, he taught two courses in Forestry at the University of Vermont and he continues to write the Woods Whys column for Northern Woodlands Magazine. Snyder lives with his family in Stowe and owns and manages a 91-acre forest in Essex County, Vt. He received both his Bachelor’s and Master of Science degrees in forestry from the University of Vermont.

Mary Kate M. Mohlman, PhD, MS, has been named the Director of Health Reform. For the last two years, Mohlman has served as the Health Services Researcher for the Vermont Blueprint for Health. Before joining the Blueprint, Mary Kate worked at the Georgetown University Lombardi Comprehensive Cancer Center. Mohlmon holds a Ph.D. in Global Infectious Disease and a M.S. in Biomedical Science Policy and Advocacy from Georgetown University, and a B.A. in Philosophy and Political Science from Boston College. Mary Kate grew up in Calais, Vt.

Sam Lincoln of Randolph Center has been appointed Deputy Commissioner of Forests Parks & Recreation. Prior to serving in the Governor’s Administration, Lincoln owned Lincoln AgriSource LLC, a timber harvesting company. Lincoln is a graduate of Vermont Technical College with a degree in AgriBusiness Management.

Gov.-Elect Scott Reappoints Michael Pieciak as commissioner of the Department of Financial Regulation

Governor-elect Phil Scott today announced he would reappoint Michael Pieciak as commissioner of the Department of Financial Regulation. The department will also retain the deputy commissioners for each of its four divisions, which include Cynthia Stuart for Banking, Kaj Samsom for Insurance, William Carrigan for Securities, and David Provost for Captive Insurance.

Commissioner Pieciak was first appointed to this role in July 2016, serving as the chief regulator of the state’s financial services sector. Prior to that appointment, he served as the deputy commissioner of the department’s Securities Division, where he led the investigation into the Jay Peak EB-5 projects. In 2014, the department modernized the state’s securities laws to allow Vermont businesses to raise capital through equity crowdfunding, making Vermont a leader in the local investing movement.

“Michael has demonstrated a strong commitment to protecting Vermonters’ financial security – especially throughout the EB-5 investigation – while also thinking outside the box to help foster entrepreneurship by modernizing systems to help Vermont meet the demands of a new marketplace,” said Governor-elect Scott. “I’m looking for leaders in every agency and department to step up and think differently about how we can better serve Vermonters and grow our economy. Michael and his deputy commissioners have each shown that it is possible to be innovative and modernize, while also safeguarding the security of Vermonters and Vermont businesses.”