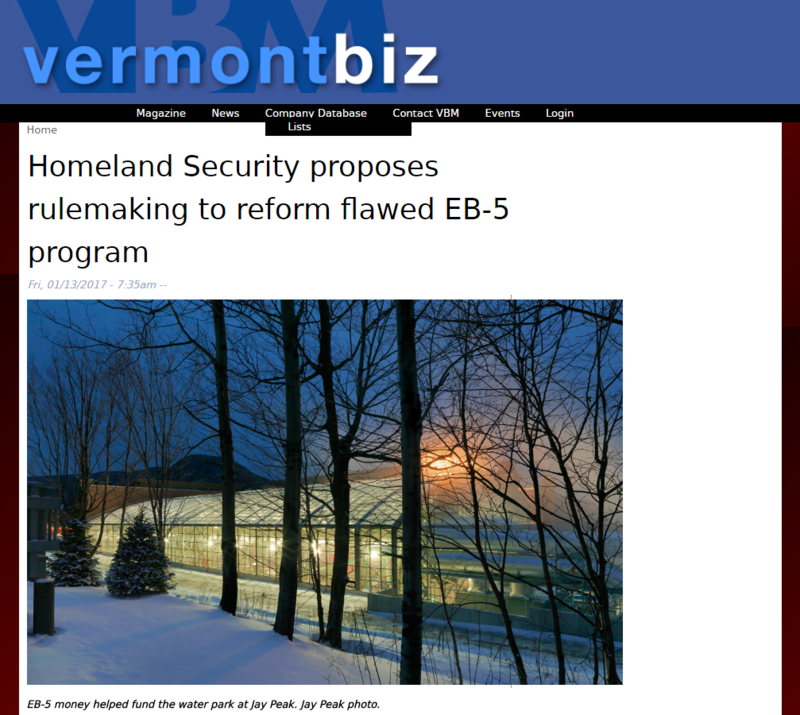 The Department of Homeland Security released on Thursday a Notice of Proposed Rulemaking that, once implemented, will make significant improvements to the EB-5 Regional Center Program. The proposal would raise the minimum investment levels for the first time since the EB-5 program was created in 1990, and it would restrict the ability of high-end real estate developers to take advantage of development incentives intended for distressed areas. Currently, almost 90 percent of EB-5 investment occurs in areas that rely on economic gerrymandering, in places lake Manhattan and Miami, to qualify as distressed.

Senator Patrick Leahy (D-Vermont), a major proponent of the program, issued the following statement Thursday after the Department of Homeland Security released its proposal: “The Department of Homeland Security’s proposal is a significant step toward improving the flawed EB-5 Regional Center Program.  By providing a much-needed increase in investment levels and by reining in abusive gerrymandering practices, these changes will help restore the program so it creates meaningful jobs in distressed and rural areas as Congress always intended.

“It will now be up the new administration to see that these improvements are implemented and enforced.  It has been reported (link is external) that President-elect Trump and his son-in-law, Jared Kushner, have profited (link is external) from foreign investments made through this government program.  I will be watching to ensure these tough new rules are not dismantled because they may impact the President-elect’s and his son-in-law’s business investments.

“I asked Secretary Johnson to improve this program and am encouraged that he has taken these steps and has initiated others.  But even Secretary Johnson has acknowledged that this problem ultimately needs a legislative solution and I remain committed to protecting investors and rooting out the rampant fraud within the program.  If we cannot take these critical steps, I believe the time has come for the program to end.”

Vermont has had profound successes and profound failures in the EB-5 program. Fraud is alleged at Jay Peak and in Newport at the proposed AnC Bio technology development, which was never built.

However, the EB-5 program has led to many successful developments, with hundreds of new employees, at Jay and Burke Mountain resorts, at Trapp Family brewery, Okemo, the Stowe airport and Sugarbush. Mount Snow recently had $52 million in EB-5 funding released for its expansion.

The EB-5 investor program allows for foreigners to apply for a permanent green card for themselves and their family with a $500,000 investment. The project must be successful and meet certain criteria. If the proposed development is not in an economically distressed region, the immigrant investor must invest $1 million.