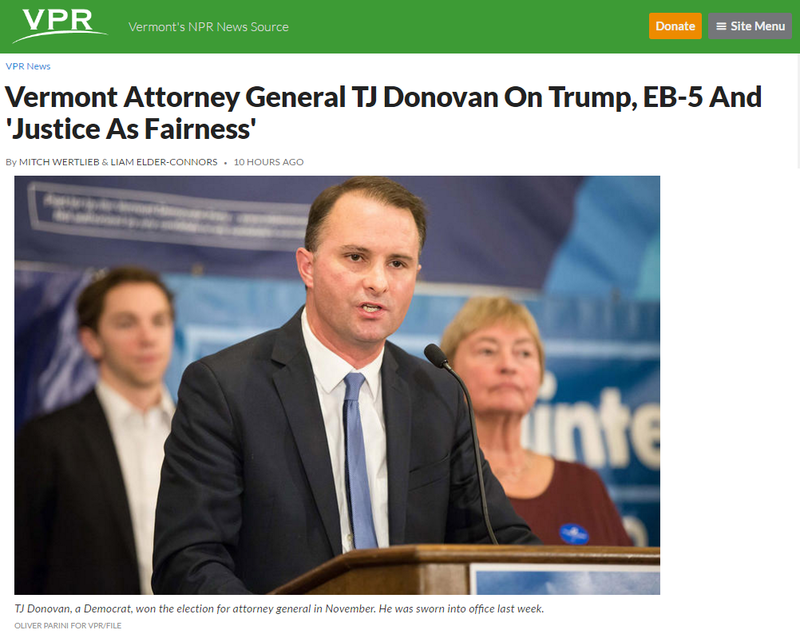 VPR spoke with Donovan about his plans and priorities now that he’s in office.

The following transcript has been edited for clarity and brevity. Listen to the complete interview above.

VPR: One central point of your campaign was to end Vermont's use of private out-of-state prisons. What specific policies are you going to pursue now that you are in office to achieve that goal?

“That's a good development, and so what I am advocating for is that before we solicit any other bids from a private corporation to incarcerate Vermonters — and it's about 250 people, it's not a lot of folks — let's be creative here in Vermont.

“[Let’s] look at our assets, look at our resources — not just the physical buildings of prison space and beds, but actually community spaces, transitional housing. And let's see if we can undertake a logistics analysis in terms of moving people who have been held past their minimums here in the state of Vermont for lack of adequate housing in the community.

"I have a very expansive view of what justice is. I agree with the philosopher [John] Rawls that 'justice is fairness.'" — Attorney General TJ Donovan

“If we measure that against these 250 people who are out of state being incarcerated by a private corporation, I think we can invest ... in Vermont in transitional housing.”

Would that then mean that your department would really have to start coordinating with folks who are working housing. I mean, that's not your purview.

“I think it is. I was talking yesterday to a fellow in my office and he said to me, ‘Do you know who John Rawls is?’ I said, 'The philosopher?' And he said, ‘Yeah, the original position. And he said, you know, justice is fairness.’

"The attorney general as a chief law enforcement officer should be speaking about these issues in terms of housing, of access to health care, of education, of addiction, of mental illness."

“I have a very expansive view of what justice is. I agree with the philosopher Rawls that justice is fairness. And if we want to truly create a level playing field and a just society, the attorney general as a chief law enforcement officer should be speaking about these issues in terms of housing, of access to health care, of education, of addiction, of mental illness.”

Let's talk about another aspect of fairness and justice. A report this week found that black drivers in Vermont four times more likely to be pulled over than white drivers. What can you do as attorney general now to really make sure that the next report doesn't have those disparities?

“We all want to treat people fairly, and I think the positive takeaway for me from that press conference Monday morning — and let me give credit to Prof. Stephanie Seguino and [the University of Vermont] for undertaking this study — but really, for the first time, we now have a benchmark. What that says to me is, we now have to invest in doing this study and analysis on an annual basis and measure against the benchmark ...

“The second thing ... [was] when addressing implicit bias, [we need to] do frequent and brief trainings. Four hours of annual training is not enough on this issue. And here here's a reality: We've got work to do. It's not just the police. It's prosecutors and judges, it's the community.

“It's something that the attorney general office, under my leadership, is going to be committed to and investing to working with police and working with prosecutors to make sure that we truly have a fair and impartial … criminal justice system.”

You've inherited the state's civil case against Ariel Quiros and Bill Stenger, the men accused of using the federal EB-5 program to defraud foreign investors of up to $200 million. Stenger settled with the Securities and Exchange Commission and is cooperating with SEC, but the state is still pursuing civil charges against both men. Given what you've reviewed of the case so far do you anticipate pursuing a case against Stenger or would you lean toward a settlement similar to the one the SEC reached?

“It's too early to say. I've had a couple of briefings … and it's a case that I'm going to take very seriously. I haven't made any decisions one way or another. It's too early in the process.

“I'm trying to get up to speed on all the cases and the EB-5 case is a case that's obviously going to be a priority for me. But [it’s] a case that I need some more time to get fully briefed on and I'm not there yet.”

After you won the election, you told the VPR that you hoped to join a possible coalition of Democratic attorneys general that would stand up to the Trump administration. Is that something in the works, and if so, what are some of the specific policies of the incoming Trump administration you might be fighting against?

“I think we all, as Vermonters, as Americans, share a bit of anxiety about what's going to happen on Jan. 20. I don't think a day goes by where there is not some sort of news item that comes out that kind of shakes us, and I'm speaking for me personally right now.

“And the role that I think I'm trying to play in Vermont is, there are areas with the federal government where we have to work together. The opiate crisis is one of them.

"But on issues that Vermonters hold dear that are issues of values, of our tradition — those would be civil rights issues, issues of protecting our environment, protecting women's reproductive health, yes, I'm going to stand up to the Trump administration.”