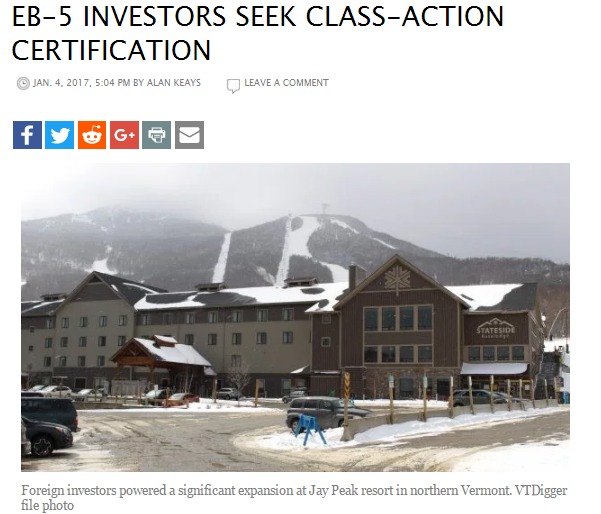 A group of investors is asking a federal judge to officially declare the plaintiffs’ fraud lawsuit against the Jay Peak resort developers a class action.

The filing by an attorney on behalf of the investors was made in U.S. District Court in Miami, the city where Jay Peak owner Ariel Quiros lives and where many of his businesses are located.

“This case is ideally suited for class certification,” Thomas Ronzetti, the lawyer for the group of investors, wrote in the recent motion asking the judge to deem the case a class action. “The proposed class is comprised of investors who reside in Europe, Asia, India, the Middle East, Australia, and the Americas, including the United States, where investors reside in more than 40 different states.”

The lead plaintiff in the case is Alexander Daccache, of Brazil. He put up $500,000 in 2010 through the federal EB-5 immigrant investor program for a project headed by Quiros and Bill Stenger, former Jay Peak president and CEO. Daccache invested in the Penthouse Suites project, which is part of The Hotel Jay.

In addition to projects at the Jay Peak resort, Stenger and Quiros raised money over an eight-year span for developments in East Burke and Newport, other Northeast Kingdom communities.

The recent filing asks the judge to certify as a class the 837 foreign investors who put money into projects led by Quiros and Stenger. Each investor put up $500,000 through the EB-5 program, for a total of more than $400 million. If their $500,000 investment created 10 jobs, an investor was then eligible for permanent U.S. residency.

Defendants in the Daccache lawsuit are Quiros, Stenger, People’s United Bank, the financial firm Raymond James, and Joel Burstein, a branch manager of Raymond James in Coral Gables, Florida, where Quiros did business. 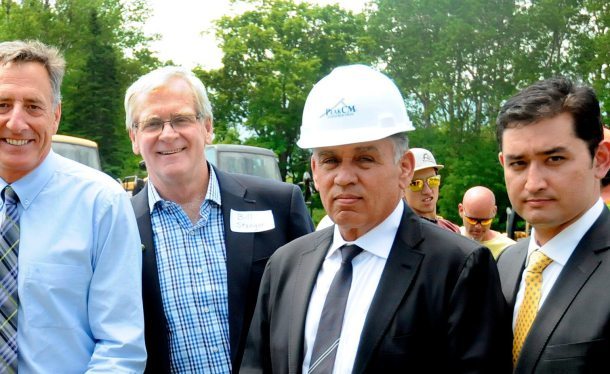 Federal and state lawsuits brought in April accuse Stenger and Quiros of misusing $200 million of the money raised through the EB-5 program, including using funds set aside for specific projects to fund work on earlier projects. The lawsuits allege Quiros used an additional $50 million for personal expenses. Stenger reached a settlement with the SEC.

Specifically, according to the recent filing in the Daccache case, the judge should certify the following class: “All persons who invested in the Jay Peak and Q Burke Limited Partnerships. Excluded from this class are defendants, their affiliates, subsidiaries, agents, board members, directors, officers, and/or employees.”

Ronzetti argues that a class-action lawsuit is appropriate in part because allegations from various plaintiffs are similar even though they may have invested in different projects.

“The key issues at trial will be whether Quiros and Stenger misused and commingled investor funds, and whether People’s Bank, Burstein, and Raymond James aided and abetted Quiros and Stenger and breached duties owed to investors,” the filing states. “Given that focus, the evidence that plaintiffs will offer to prove their claims will be common to all class members.”

Ronzetti added that a class-action certification would streamline the litigation process, including making it easier on the courts and the attorneys involved. And, he wrote, the defendants are seeking similar outcomes.

“The investors have a common interest in recovering their damages from defendants, and they will share in any recovery in proportion to the amount of their principal loss,” the filing states.

A separate case filed by investors is also playing out in federal court in Miami. In that lawsuit, 31 Chinese investors also allege fraud against almost the same defendants, minus Stenger. He isn’t named, according to the attorney who made the filing, because Stenger doesn’t appear to have money that could help the investors recoup their losses.

Curtis Carlson, the Florida attorney representing the 31 Chinese investors, said Tuesday he isn’t worried about a class-action lawsuit taking away his clients. He said what typically happens is all members of a projected class, in this case 837 investors, are sent notices alerting them of the opportunity to opt out or opt in.

“All of my people will opt out,” he said.

Ronzetti could not be reached Tuesday for comment. Court filings don’t state the number of investors who have joined the Daccache lawsuit.

The lawsuit alleges that Quiros “orchestrated” fraud and that Stenger and Burstein, Quiros’ former son-in-law, as the former branch manager for Raymond James, “enabled” the alleged fraud.

In addition, according to the lawsuit, Stenger was aware he had a fiduciary duty to investors and “facilitated” transfers of investor money from a People’s United Bank account to Raymond James accounts that Quiros had sole authority over.

All the defendants have submitted filings denying the allegations.