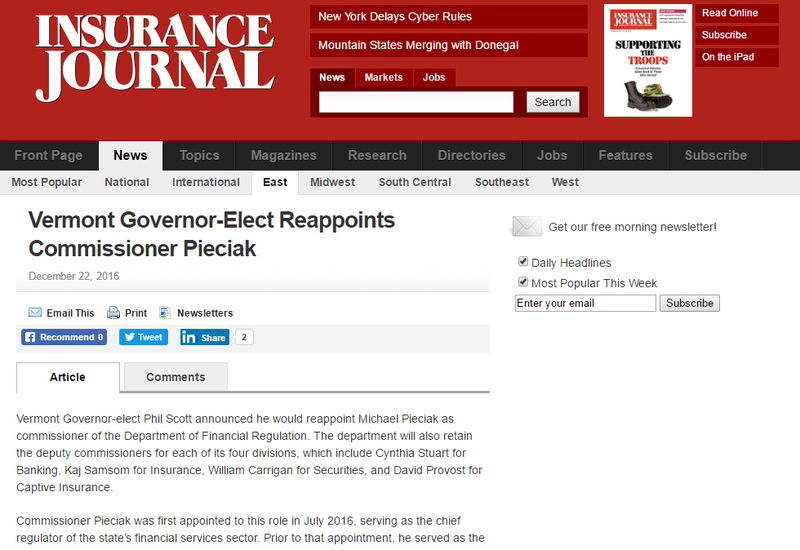 Vermont Governor-elect Phil Scott announced he would reappoint Michael Pieciak as commissioner of the Department of Financial Regulation. The department will also retain the deputy commissioners for each of its four divisions, which include Cynthia Stuart for Banking, Kaj Samsom for Insurance, William Carrigan for Securities, and David Provost for Captive Insurance.

Commissioner Pieciak was first appointed to this role in July 2016, serving as the chief regulator of the state’s financial services sector. Prior to that appointment, he served as the deputy commissioner of the department’s Securities Division, where he led the investigation into the Jay Peak EB-5 projects. In 2014, the department modernized the state’s securities laws to allow Vermont businesses to raise capital through equity crowdfunding, making Vermont a leader in the local investing movement.

“Michael has demonstrated a strong commitment to protecting Vermonters’ financial security, especially throughout the EB-5 investigation, while also thinking outside the box to help foster entrepreneurship by modernizing systems to help Vermont meet the demands of a new marketplace,” Governor-elect Scott said. “I’m looking for leaders in every agency and department to step up and think differently about how we can better serve Vermonters and grow our economy. Michael and his deputy commissioners have each shown that it is possible to be innovative and modernize, while also safeguarding the security of Vermonters and Vermont businesses.”

Appointed in 2014, Deputy Commissioner Samsom and has served in the department since 2006. The Insurance Division is tasked with maintaining affordability and availability of insurance for Vermonters, ensuring reasonable competition among insurers and protecting consumers against unfair and unlawful business practices.

Deputy Commissioner Carrigan was appointed in July 2016 and has worked in the department since 2007. Carrigan is a Certified Fraud Examiner and was a member of the team that investigated the Jay Peak EB-5 matter. He oversees the division’s efforts to protect the Vermont investing public from fraud, and promote development of Vermont’s capital markets.

In addition, Deputy Commissioner Provost was appointed in June 2008 and has been with the division since 2001. He leads the division in its mission to maintain and enforce a regulatory system that attracts quality captive insurance business to Vermont and advances the growth of this sector.