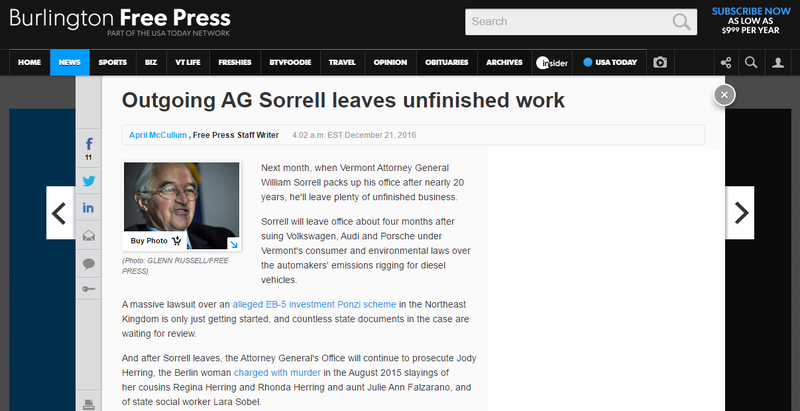 Sorrell will leave office about four months after suing Volkswagen, Audi and Porsche under Vermont's consumer and environmental laws over the automakers' emissions rigging for diesel vehicles.

A massive lawsuit over an alleged EB-5 investment Ponzi scheme in the Northeast Kingdom is only just getting started, and countless state documents in the case are waiting for review.

And after Sorrell leaves, the Attorney General's Office will continue to prosecute Jody Herring, the Berlin woman charged with murder in the August 2015 slayings of her cousins Regina Herring and Rhonda Herring and aunt Julie Ann Falzarano, and of state social worker Lara Sobel.

These are just a few of the cases Attorney General-elect T.J. Donovan will inherit from his fellow Democratic predecessor. Donovan, who has named fighting heroin addiction as a top priority, takes office in January.

Sorrell has served as attorney general since his appointment by Gov. Howard Dean in 1997, and his tenure has been marked by national lawsuits on consumer-protection and environmental issues, a fight against the tobacco industry and an investigation into his relationships with campaign donors.

This month Sorrell made two final announcements to close out his tenure: He settled a consumer-protection lawsuit against the affair website Ashley Madison, where he said about 16,000 Vermonters had accounts, and he released a report calling for more anti-bias training for Vermont police officers.

T.J. Donovan speaks at the Hilton Hotel in Burlington after being elected Vermont attorney general on Nov. 8, 2016.

The change of attorney general is an opportunity for a shift in direction.

“I filed the tobacco litigation four weeks to the day after I was sworn in,” Sorrell said in a recent interview at his Burlington office, tucked into a corner next to the state Department of Health offices. “Vermont hadn’t entered that case, and it was a case I thought it was important to bring, and I’m sure T.J. will have cases that are similarly important to him to get involved in.”

Donovan has pledged to bring fresh priorities to the state's largest law firm, with a renewed focus on local issues, opiate addiction and alternatives to incarceration — but he expects to do so while also following through on the lawsuits and cases that began under Sorrell's tenure.

"It's a matter of setting priorities," said Donovan, who is leaving his job as Chittenden County state’s attorney to become the state’s top lawyer.

Donovan has been welcomed into meetings with state lawyers to get caught up on pending cases.

Sorrell expects to leave office before resolving several high-profile allegations, including a billing issue for state consultant Jonathan Gruber that made national headlines.

State Auditor Doug Hoffer wrote that Gruber, who was hired under a $400,000 economic modeling contract to analyze Vermont's single-payer health care proposal, submitted bills to the state that claimed dubious numbers of hours worked and lacked key details. State officials, according to Hoffer, "failed to exercise due diligence" in reviewing the bills.

Hoffer released a 54-page report about the Gruber bills and referred the issue to the Attorney General's Office in February 2015.

“That is one that I hoped would have been resolved by now," Sorrell said of the Gruber issue, adding later, “I can assure you that we haven’t dragged our feet to avoid resolving this or other cases... On the other hand, I’m not going to give away cases and settle them too cheaply just for the sake of settling.”

Sorrell said the state's EB-5 lawsuit, which was filed in state court this year in conjunction with a similar federal lawsuit, is one of the largest cases he's handled overall, and the largest case with a direct impact on Vermont.

The lawsuit alleges fraud by two business partners, Ariel Qurios and Bill Stenger, who used foreign investments through the EB-5 program to build projects in the Northeast Kingdom. 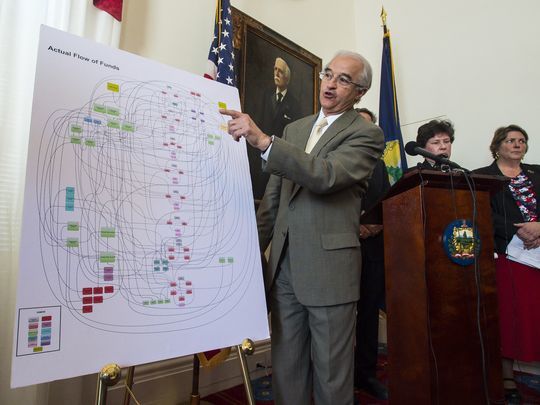 Attorney General William Sorrell speaks during a news conference in Montpelier on Thursday, April 14, 2016, after the Securities and Exchange Commission alleged that Ariel Quiros, owner of the Jay Peak resort and Bill Stenger, president and CEO of Jay Peak, misused more than $200 million of EB-5 immigrant investor funds. He is seen with a chart that purports to show how Stenger and Quiros allegedly diverted funds.

The federal government has reached a settlement with Stenger, but Vermont is continuing to pursue claims against both men. The U.S. Attorney for Vermont is considering criminal charges, Sorrell said, which could move more quickly than the civil cases.

“This is a complex case," Sorrell said. "We’re very early in this matter, and it has the potential to get broader and deeper."

Documents related to Vermont's handling of the EB-5 program remain under a litigation hold while the case is pending, and Sorrell would not commit to a time line for releasing them.

“We would like to be in a position to disclose as much as we can without prejudicing the pending litigation," Sorrell said. "It’s entirely possible the state will be the subject of litigation in this matter. So we’re — it’s not that we’re trying to hide information." 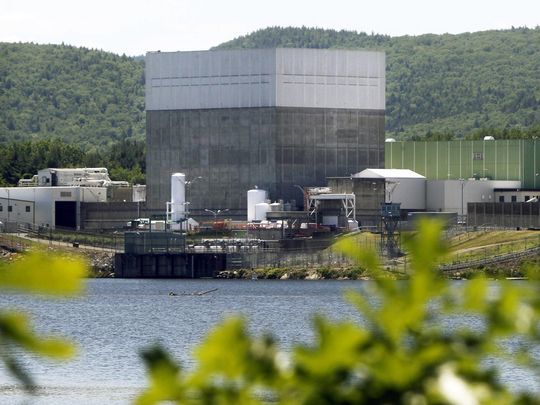 Sorrell pointed to a couple of other issues that Donovan will have to decide, including weighing in on Entergy Nuclear's proposed sale of the closed Vermont Yankee power plant to NorthStar Group Services.

“The attorney general's going to have a very important voice on what should be the state’s position on these issues," Sorrell said.

The incoming attorney general is also interested in the idea of holding drug companies accountable for their role in the opiate and heroin addiction crisis, but he said the topic will require more investigation. 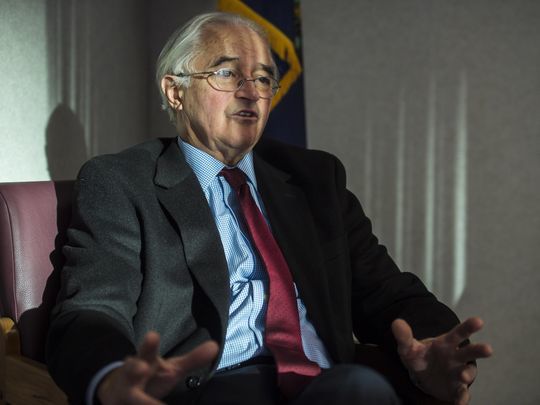 Donovan said he is not yet ready to announce any hiring decisions in the Attorney General’s Office. He has been assisted in the transition by Jake Perkinson, an attorney who was the former chairman of the Vermont Democratic Party.

In a couple of ongoing cases Donovan acknowledged that he may have a "different philosophy" than Sorrell, but declined to disclose any specific example.

Donovan is not chomping at the bit to sue the federal government under the President-elect Donald Trump administration and said he’s taking a wait-and-see attitude. The number one issue facing Vermont, in Donovan's view, is opiate addiction.

"We have a heroin epidemic in this state," Donovan said. "We need to work with the federal government."