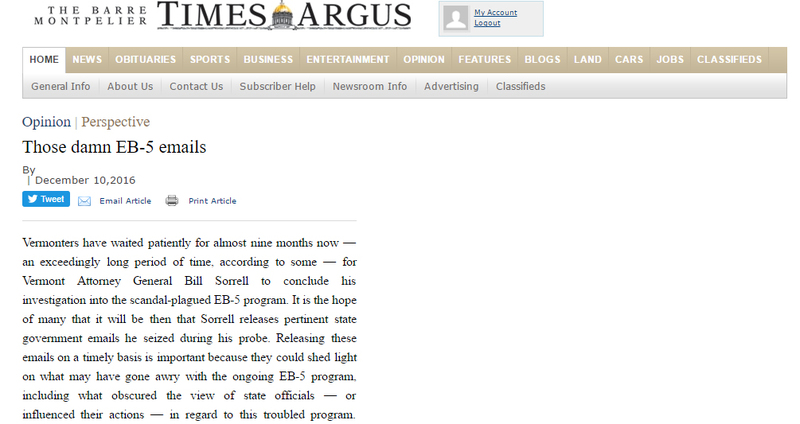 Vermonters have waited patiently for almost nine months now — an exceedingly long period of time, according to some — for Vermont Attorney General Bill Sorrell to conclude his investigation into the scandal-plagued EB-5 program. It is the hope of many that it will be then that Sorrell releases pertinent state government emails he seized during his probe. Releasing these emails on a timely basis is important because they could shed light on what may have gone awry with the ongoing EB-5 program, including what obscured the view of state officials — or influenced their actions — in regard to this troubled program. Such information is crucial to an incoming administration because it helps them protect Vermonters from similar events.

Yet there has been no indication by the attorney general’s office when this investigation will conclude or when the emails might be released. Attempts by the press to obtain these emails have been vigorously resisted.

For example, the online news organization VTDigger is seeking the release of unedited documents relating to the federal assessment of the state-run EB-5 regional center. The state has resisted the release of such documents. VTDigger is fighting this decision in court. Also, when Vermont’s media learned about attempts by Gov. Peter Shumlin’s administration to destroy EB-5 emails, state officials constructed barriers to prevent the press from obtaining these emails.

What’s unsettling to many Vermonters is a lack of clarity on just when this investigation will conclude. Most believe that it will now extend beyond Sorrell’s tenure, which ends in a few weeks. Further delays are likely because T.J. Donovan, the incoming attorney general, will need time to get up to speed on the progress of this investigation.

And then there’s this scenario, whether real or imagined: What happens if Gov. Peter Shumlin attempts to invoke his executive privilege on the EB-5 emails directed to and from his office and then asks them to be archived? Pertinent information will be hidden for years.

The scandal involving the EB-5 program is not inconsequential, and the people of this state have a right to know what state officials knew and when they knew it. So far, they are being prevented from learning the facts. Although Vermonters are exceedingly patient and understand the need for an investigation, there is no doubt their concern is heightened over delays in releasing these important emails. There will likely come a point when their patience turns to frustration, and then frustration turns to anger.

For a politician to ignore the public’s concern over the release of government emails is risky business. During a presidential debate Sen. Bernie Sanders famously said that Americans were sick and tired of hearing about Hillary Clinton’s “damn” emails. Sen. Sanders was wrong. Americans were troubled by Clinton’s emails, and her campaign failed to adequately address their concerns. As a result, Clinton’s emails became a big part of the presidential campaign and perhaps contributed to her defeat. Americans felt she was hiding something.

Politicians wade into very choppy political waters when the public thinks something is being hidden from them. The extended length of this investigation only bolsters a belief that there is a lack of transparency in the EB-5 program. If Sorrell leaves office without a decision on disclosing these emails, it leaves T.J. Donovan with a political mess.

Evasiveness attracts more scrutiny, not less. The best way to counter this is to be proactive and more transparent, rather than less so. The Shumlin administration and Sorrell have no one to blame but themselves for this email mess. It is, therefore, incumbent on them to clean it up before they both leave office in the next few weeks. Releasing EB-5 emails will quickly resolve this issue.