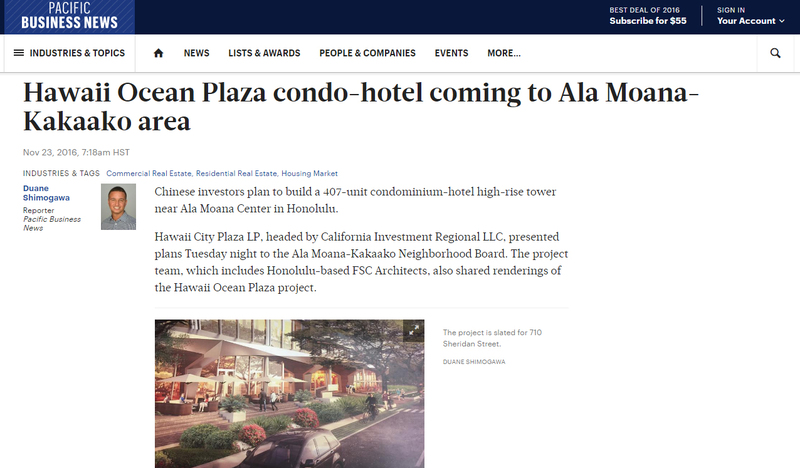 Chinese investors plan to build a 407-unit condominium-hotel high-rise tower near Ala Moana Center in Honolulu.

The project is slated for 710 Sheridan Street.

Pacific Business News broke the news about the project, which will include 207 condo units and 200 hotel rooms in a 40-story tower with units ranging from one- to three-bedrooms.

Hawaii Ocean Plaza also will have 16,261-square-feet of commercial space and 410 parking stalls.

The total square footage of the project is 449,815 square feet.

The City and County of Honolulu’s Department of Planning and Permitting recently issued a demolition permit for the site of the planned project at 710 Sheridan St.

In July, Hawaii City Plaza purchased the property for this project for $6.2 million.

The property’s lot measures about 45,000-square-feet or a little more than an acre of land and is zoned for a retail/condo development.

The names of the Chinese investors were not immediately available.

The project near Walmart and Sam’s Club is expected to have ground-floor commercial space for retail and restaurants as well as a parking podium that will be the foundation for a condominium tower.

The condo tower is expected to include a mix of affordable and market-rate units.

The Hawaii Ocean Plaza is being developed by Advantage America Hawaii Regional Center LLC as part of the EB-5 immigrant investor program. The program has resulted in $8.7 billion worth of foreign investment in U.S. businesses over the past three years and has created more than 35,000 jobs in America, according to U.S. Citizenship and Immigration Services.

To be eligible for visas that can ultimately lead to green cards, foreign investors must invest $1 million in new businesses that create 10 jobs in the U.S. That threshold falls to $500,000 if the investment is made in a rural area or areas with higher-than-average unemployment.

The project will be in the Ala Moana neighborhood “transit-oriented area” with the goal of trying to get greater density around transit stations to create walkable and bikeable communities.

The Chinese developer already has two projects in the Los Angeles area that are smaller, limited-service hotels. This is its first project in Hawaii.