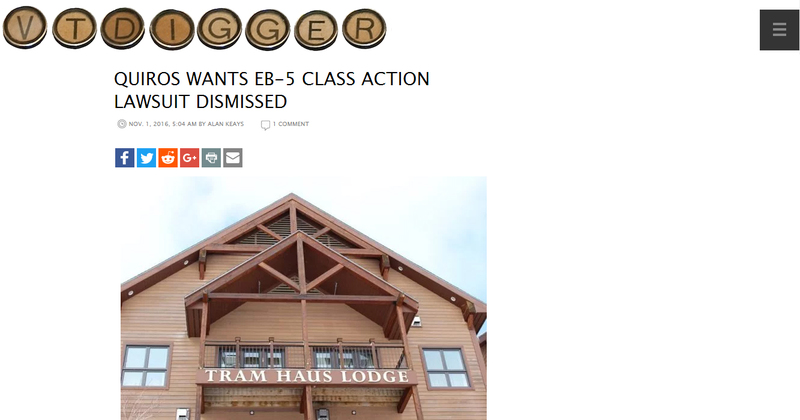 Attorneys for Ariel Quiros are pushing to have a class-action lawsuit against their client tossed out, in part, because they say claims of investor fraud in development projects in northern Vermont are not clearly spelled out against him.

“They vaguely say, for instance, that ‘Quiros and (William) Stenger produced and adopted standardized offering materials.’” Scott Cosgrove, a Florida attorney for Quiros, wrote in a recent filing in the case brought by investors, led by plaintiff Alexander Daccache.

“Absent from the (complaint) is any allegation of what Mr. Quiros did and when to ‘produce’ and ‘adopt’ such offering materials,” Cosgrove added. “It is notable that the (U.S. Securities and Exchange Commission) has not made any such allegation against Mr. Quiros and that there does not actually appear to be any factual basis for one.”

In the filing, Cosgrove asks to have the case, which he said is “attorney-driven,” dismissed.

Quiros, a Miami businessman, is owner of Q Resorts, a holding company that includes Jay Peak. Stenger, of Newport, is Jay Peak’s former CEO and president. A court-appointed receiver is currently overseeing the properties at the center of the fraud allegations.

State and federal lawsuits filed in April against Stenger and Quiros allege the two men misused $200 million in immigrant investor funds through the EB-5 visa program to pay for hotel and condo projects in the Northeast Kingdom.

The federal lawsuit, brought by the SEC, claimed the two men operated a “Ponzi-like” scheme.

The state and the SEC both claim that Quiros bought Jay Peak Resort on June 23, 2008, using EB-5 funds that were to be held in escrow for the construction of two hotels.

Quiros and Stenger subsequently had to acquire additional investor funds to backfill the projects, setting up a “Ponzi-like” system where the developers were taking money from investors, according to the SEC lawsuit.

The class-action lawsuit was filed about a month after the legal action brought by the state of Vermont and the SEC. The class-action case was filed in federal court in Miami, where many of Quiros’ companies are based, on behalf of investors in projects headed by Quiros and Stenger.

Daccache, the lead plaintiff who lives in Brazil, invested $500,000 in 2010 as part of the EB-5 program in the Penthouse Suites project, which is part of the Hotel Jay.

EB-5 investors put up at least $500,000, plus an administrative fee, in a qualified project. If that investment creates at 10 jobs, the investor becomes eligible for permanent U.S. residency.

The class-action lawsuit alleges that Quiros “orchestrated” the fraud, and Stenger, his business partner, as well as Joel Burstein, Quiros’s former son-in-law and the former branch manager for Raymond James, “enabled” the alleged fraud.

Like the class-action case,Quiros currently has motions pending to dismiss the SEC case against him as well as the state lawsuit. Stenger has taken a different approach to his cases.

He settled his SEC case, agreeing to cooperate with investigators. He still faces the possibility of a monetary penalty, based on his level of cooperation and ability to pay. In the state case, Stenger has asked for a trial.

The latest filing regarding the dismissal of the class-action case against Quiros raises some of the same reasoning contained in motions to dismiss the other state and federal actions, including that the allegations fall outside the statute of limitations.

Attorneys for the parties opposing Quiros have contended that the actions leading to the allegations include a “continuing course of conduct” that fall within the limitations.

In his latest motion calling to dismiss the class-action case, Quiros’s attorney takes issue with the term “Ponzi scheme.”

“The (lawsuit) relies on labels rather facts. For instances, Plaintiffs have failed to allege the basic elements of a ‘Ponzi scheme’ despite making that label a central element of their claims,” he wrote.

Among his arguments, he cites case law that define a Ponzi scheme as a “phony investment plan,” in which funds paid by later investors are used to pay artificially high returns to the initial investors in order attract more investors.

“Plaintiffs do not point to any allegations that the Limited Partnerships at issue conducted ‘little or no legitimate business’ as required by laws,” Cosgrove wrote, adding that the use of the “Ponzi-scheme” wording is “reckless” and “overreaching.”