Paula Hawks Puts EB5 and Gear up on Chopping Block 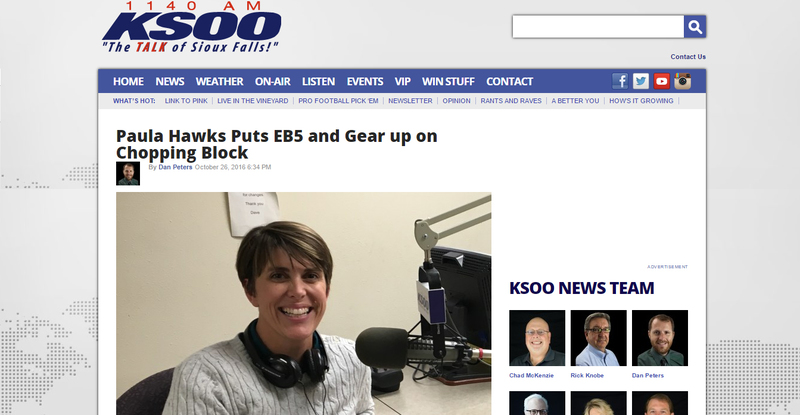 A fiscally cautious approach would be necessary to erase Government deficits according to one South Dakota candidate for Congress.

Democrat Paula Hawks recognizes that Federal programs need to be cut to balance the budget. Two such examples immediately come to mind.

“There are some programs that I can think of right off the bat that I would (jettison) such as EB5. This is a program that never should have been reauthorized. Let’s get rid of Gear Up. The goals of the program are worthy, but we have to make sure that we are following through on those goals. If we cannot get the return on investment then that program needs to be overhauled.”

Another stark reality that Hawks envisions would be a long-term approach to cutting spending.

“There’s going to be some pain. It’s not going to fall directly on Florida, California and New York. It’s going to be far-reaching. What I didn’t say is that we are going to be balancing the budget next year, five years or possibly even the next ten years. It’s a process that we have to start now if we want to make any progress on it.”

According to Hawks Social Security and Medicaid need to be made solvent because people paid into these programs.

Hawks is challenging Republican Kristi Noem who is the incumbent for South Dakota’s lone seat in the U.S. House of Representatives.

EB5 Processing Time Updates for the I-526 Petition and I-829 Petition
February 11, 2020
EB-5 program: It helps to have friends in high places
January 21, 2020
Legislation would ease restrictions on EB-5
January 14, 2020
International Students Should Read About These Major EB-5 Visa Advantages
January 21, 2020
Between Two EB-5 Bills, Only One Offers Real Reform
February 04, 2020
Join Professionals on EB5Projects.com →
Securities Disclaimer