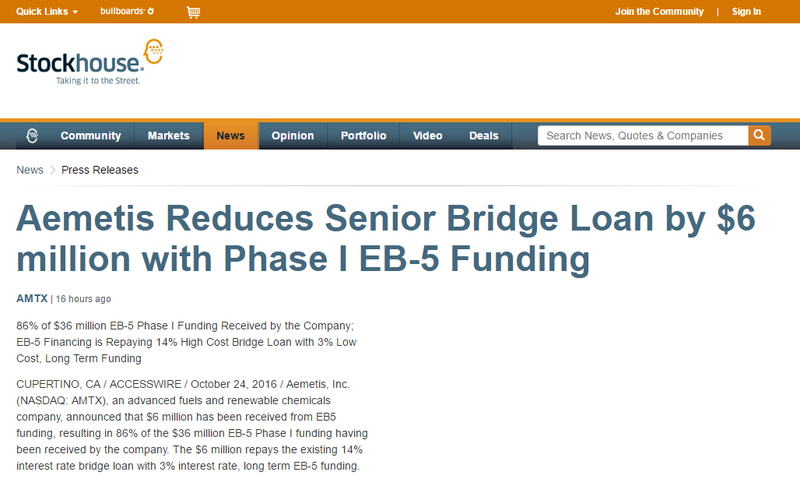 Aemetis, Inc. (NASDAQ: AMTX), an advanced fuels and renewable chemicals company, announced that $6 million has been received from EB5 funding, resulting in 86% of the $36 million EB-5 Phase I funding having been received by the company. The $6 million repays the existing 14% interest rate bridge loan with 3% interest rate, long term EB-5 funding.

Under the EB-5 Phase I funding, Aemetis offered subordinated notes in the amount of $500,000 per note to refinance the high interest rate bridge loan for the existing Keyes ethanol plant, and raised $36 million from 72 foreign investors. To date, $31 million of this amount has been released from the EB-5escrow account to the company and used to reduce a higher cost bridge loan held by our senior lender. After applying the $6 million, the senior bridge loan reduced to $62.5 million.

Headquartered in Cupertino, California, Aemetis is an advanced fuels and renewable chemicals company founded in 2006. Aemetis owns and operates a 60 million gallons per year ethanol and 420,000-ton animal feed plant in California. Aemetis also owns and operates a 50-million-gallon capacity renewable chemicals and advanced fuels production facility on the East Coast of India producing high quality, distilled biodiesel and refined glycerin for customers in Europe and Asia. Aemetis operates a research and development laboratory at the Maryland Biotech Center, and holds granted patents on technology for the production of renewable fuels and biochemicals.