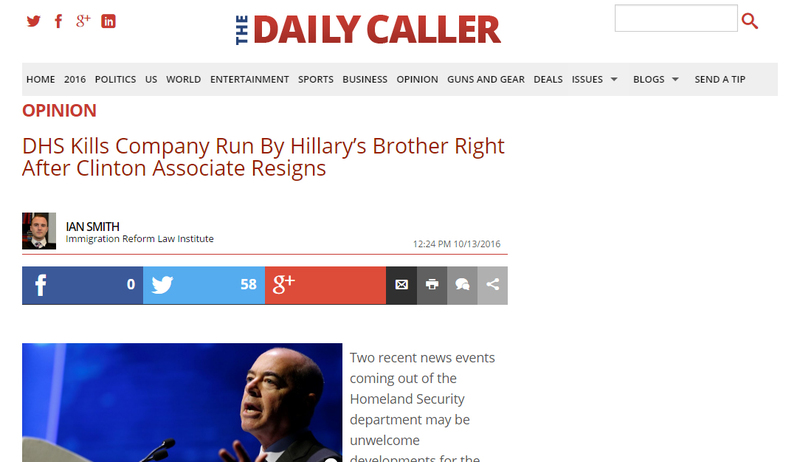 Two recent news events coming out of the Homeland Security department may be unwelcome developments for the Clinton press team. Just last night it was reported that the agency announced it has terminated an ‘immigrant investor’-related business run by Hillary’s brother, Tony Rodham. That business, which was financed through the controversial EB-5 investor green card program, has faced ongoing scrutiny in the press, following ongoing investigations for securities fraud and questions about the role of its other high-profile founder, Virginia governor Terry McAuliffe.

The new announcement also comes on the heels of the resignation of DHS Deputy Secretary Alejandro Mayorkas. Last year, the DHS Inspector General reported that Mayorkas have given ‘preferential treatment’ to the Rodham-McAuliffe venture. Whether the two events, just a few days apart, are connected is unknown. But the close ties between Mayorkas and the Clintons certainly can’t be denied.

Prior to joining DHS, Mayorkas, had been appointed by Bill Clinton as a U.S. attorney in California.  While on the job, he became entangled in influence-peddling by Hillary Clinton’s other brother, Hugh Rodham. Both intervened on behalf of the son of a major California Democrat-donor, Horacio Vignali, after he was convicted of trafficking $5 million worth of cocaine. For his attempt to secure a pardon from the White House, Hugh Clinton was reportedly paid $200,000. Years later at his Senate confirmation hearing, after being picked by President Obama to run U.S. Citizenship and Immigration Services (USCIS), Mayorkas admitted that he had “made a mistake.”

The 2009 confirmation hearing disclosed further controversial contacts between Mayorkas and Hillary’s other brother, Tony Rodham. According to a DHS Inspector General’s investigation, Mayorkas had been fast-tracking ‘EB-5 investor’-visa applications for a business run by Tony as well as Virginia Governor and former Clinton-fundraiser, Terry McAuliffe. That visa program, currently up for renewal by Congress, allows wealthy foreigners to skip the line and quickly obtain green cards if they invest $500,000 in a US-based business. Rodham and McAuliffe had started an electric car company in 2010 largely financed by the visa program. Although USCIS has yet to comment on their decision to terminate its relationship with Tony Rodham, the company hasn’t sold a single car since its inception and has been under an SEC investigation for securities fraud.