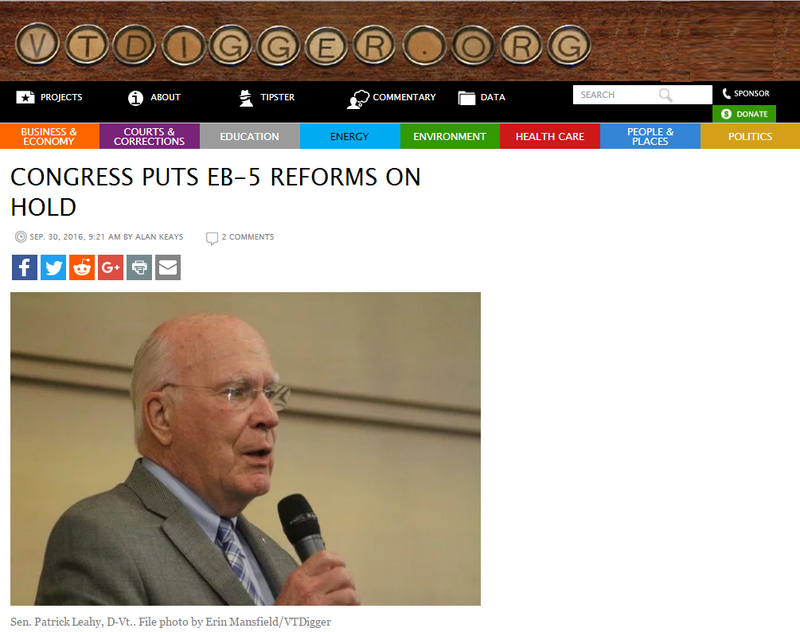 Congress has extended EB-5 immigrant investor legislation for at least a couple of months, shelving a proposal aimed at reforming the program at the center of the biggest alleged fraud case in Vermont’s history.

The status quo keeps investors in defrauded projects in limbo as they seek permanent U.S. residency through the program.

The EB-5 program was set to expire at the end of the week. However, a measure to extend it was attached to a continuing resolution funding government operations through Dec. 9.

That continuing resolution passed the House late Wednesday night. The Senate approved the measure earlier Wednesday. The bill is now on the way to President Barack Obama to sign into law.

Sen. Patrick Leahy, D-Vt., voted against the continuing resolution, as he had threatened to do in recent weeks unless changes were made to the EB-5 program, which he said was “rampant” with fraud.

David Carle, Leahy’s spokesman, said it was “rare” for the senator to vote against a continuing resolution, adding that he couldn’t recall the last time it happened.

“This has gone on for so long that he felt the need to send a very strong signal about how strongly he feels about the need for reform,” Carle said Thursday of Leahy’s push for changes to the EB-5 program.

Sen. Bernie Sanders, I-Vt., did not vote on the continuing resolution. He was in New Hampshire on Wednesday campaigning for Democratic presidential candidate Hillary Clinton.

Rep. Peter Welch, D-Vt., voted in favor of the continuing resolution, saying in a statement that while he agreed with Leahy that the EB-5 program must be reformed, he supported the short-term spending bill to avoid a government shutdown.

The EB-5 program has been enmeshed in scandal in Vermont, which came to a head in April when federal and state lawsuits were filed against William Stenger, former CEO and president of Jay Peak, and Miami businessman Ariel Quiros, owner of Q Resorts, a holding company that includes Jay Peak.

The lawsuits allege that the two men misused $200 million in investor money through the EB-5 program. Money was raised from immigrants to fund eight separate development projects in the Northeast Kingdom, including hotels, condos and a biomedical center in Newport.

Stenger has since settled the federal case against him, agreeing to cooperate with investigators. He still faces the possibility of a monetary penalty, depending on his level of cooperation and ability to pay.

Leahy, who had been a vocal supporter of the EB-5 program, has close ties to Stenger. The senator has said he would feel betrayed if the allegations against Stenger were proven true.

Leahy had also pushed for EB-5 reforms last December, when Congress passed an omnibus spending bill. In the end, the reforms were scuttled and the program was extended as is through the end of this month, setting up another opportunity to push for changes.

A key provision in the latest reform package would have provided some relief to investors in projects heading by Stenger and Quiros who now see their goal of permanent U.S. residency in doubt.

EB-5 investors put up $500,000 in a qualified project, plus a $50,000 administrative fee. In exchange, that person becomes eligible for permanent residency in the United States if that investment creates 10 jobs.

The reform legislation would have allowed defrauded investors the opportunity to reinvest in new or amended projects. Provided the new investment still produced 10 jobs, the investor would be eligible for permanent U.S. residency.

Take the case of the proposed biomedical center in Newport, which has been called “nearly a complete fraud” by federal regulators. It was never built, meaning jobs expected to be created through its construction and work taking place there never materialized.

Under the reform legislation, foreign investors in that project could have used money recouped for them by Michael Goldberg, the court-appointed receiver now overseeing that property, to reinvest in another qualified EB-5 project anywhere in the country.

Other reforms in the legislations would have allowed the U.S. Department of Homeland Security to step up project audits, site visits and fraud investigations.

Rep. Bob Goodlatte, R-Va., and House Judiciary Committee chairman, this summer introduced the reform legislation, officially known as The American Job Creation and Investment Protection Reform Act of 2016. The bill never advanced out of the committee.

As Congress works on the omnibus appropriations bill due by Dec. 9, Goodlatte will continue to push to ensure that any reauthorization of the EB-5 program contains reforms, an aide to the House Judiciary Committee said Thursday.