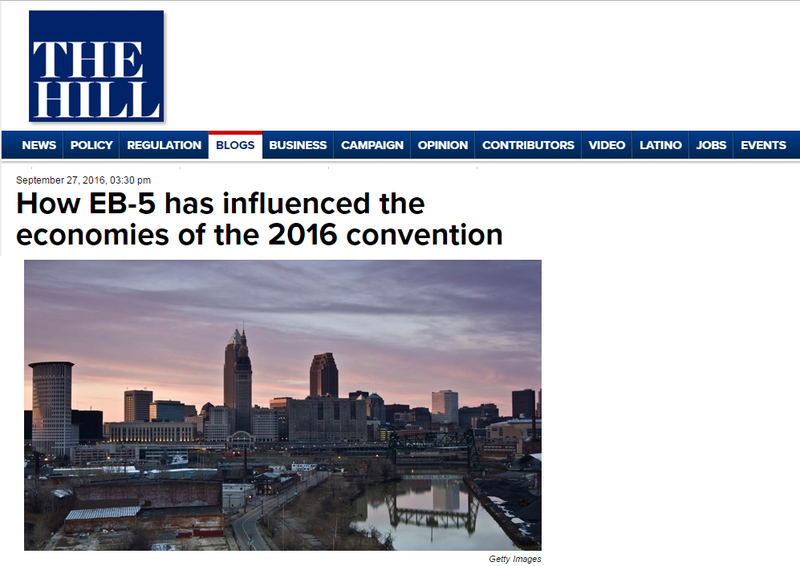 In July, the two main parties of the American political system gathered for their respective Presidential Nomination Conventions in separate and distinct cities to formally nominate their parties’ Presidential Nominee for this November’s election. In Cleveland, the Republicans held their convention in a city whose roots grow from a traditionally working class population and was once the epicenter of American steel and oil manufacturing. Democrats assembled in Philadelphia, PA for their convention, a city synonymous with early American history and the Democratic political system and once the capital of the United States.

While the major parties of our country participated in these political events, it is likely most who were present were unaware that a largely quiet but effective capital investment program, the EB-5 Regional Center Program, is responsible for noticeable footprints on both cities. Since 2008, the Program has generated over $14 billion in foreign direct investment (FDI) to the United States at no cost to the taxpayer.

Cleveland, like most other urban areas, is largely Democratic in its political make up, but resides in a notorious swing state for national elections. The Republicans hosted their convention in the center of downtown which in recent years has seen a Renaissance. Much of the redevelopment of Cleveland and its surrounding areas has been thanks to EB-5, though those walking the streets of the city may never know it. Cleveland International Fund (CiF), a federally designated EB-5 Regional Center, has attracted $220 million in EB-5 investments alone in its first seven projects, with two other projects in the works now. This does not account for the other millions of dollars that EB-5 helps to leverage to complete these ambitious redevelopment projects and the subsequent development that is inspired around it.

Projects by CiF include the redevelopment of the East Bank of the Flats, an area adjacent to the Cuyahoga River that had fallen into disrepair and became known as a haven for crime. $69 million in two phases of EB-5 investment has since reimagined this area as a bustling, mixed-use section of downtown with corporate offices, hotels, apartments and vibrant nightlife and is responsible for creating over 1,800 local jobs in the first phase and project to create an additional 1,400 in the second phase.

CiF also helped with a $1.2 billion expansion and renovation project for University Health Systems in Cleveland, a world-class healthcare system. $60 million in EB-5 investments went to participate in financing the Ahuja Medical Center and Seidman Cancer Center, two new, state-of-the-art healthcare facilities serving Cleveland and attracting patients from across the world for care. This project also created over 5,500 jobs. These are just two examples of the profound impact CiF has had on this struggling city that has now seen the benefit of an economic revival in the past few years thanks in large part to EB-5 capital.

A little over 400 miles away, Democrats joined together for their own convention to nominate their Presidential candidate. Philadelphia is over four times the size of Cleveland in terms of population and almost twice as large in square mileage. Like other urban centers, Philadelphia was in need of redevelopment and revitalization and beginning in 2003, EB-5 stepped in to change the landscape of the city at the hands of CanAm Enterprises. More than 30 projects have raised over $647 million in EB-5 capital since 2004, creating over 16,226 jobs in a city of 1.5 million citizens.

Through a public-private partnership with the city, CanAm joined forces with the Philadelphia Industrial Development Corporation (PIDC) to pool investment through the EB-5 Program for development projects in Philadelphia. Notably, nine projects have been in the Philadelphia Navy Yard a decommissioned U.S. Naval Base that has been converted into a mixed use urban campus by the City of Philadelphia.  These nine projects have collectively raised $160 million in EB-5 capital and will have created more than 4,700 jobs. The Philadelphia Navy Yard is now home to over 12,000 employees from 152 companies occupying over 7.5 million square feet of historic and new high-performance LEED certified construction.

CanAm PIDC Regional Center also helped modernize the Southeastern Pennsylvania Transportation Authority’s (SEPTA) fare collection system, which is project to create over 3,825 jobs through $175 million in EB-5 investment. Other projects include hotel development, the Pennsylvania Convention Center, and healthcare facilities, though this list is not exhaustive. These projects allowed for development and modernization, in partnership with the city, that otherwise would not have been possible with financing through public funds.

The examples in Cleveland and Philadelphia are just a fraction of the impact that EB-5 is having on cities and towns, both big and small, all across America. The EB-5 Investment Program creates thousands of American jobs across the country without costing taxpayers a dime. If the program lapses, a minimum of $11 Billion in community investment and 220,000 local jobs will disappear immediately. So we urge Congress to reauthorize the program as we continue to work for important reforms.