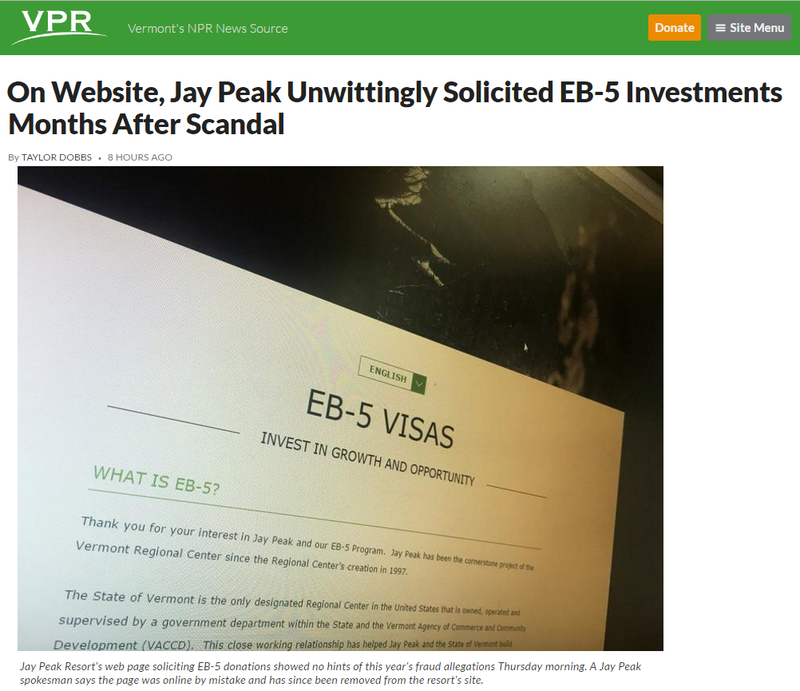 Until Thursday, Jay Peak’s website still included a web page soliciting investments in Jay Peak’s EB-5-funded projects. The page was removed Thursday afternoon after VPR made inquiries about it.

A version of the web page as it appeared Thursday morning is available through the Internet Archive’s Wayback Machine here.

The webpage made no reference to the major fraud allegations made against the resort’s CEO Bill Stenger and owner Ariel Quiros earlier this year. The U.S. Securities and Exchange Commission (SEC) said Quiros and Stenger abused the EB-5 program, which was designed to bring job-creating investments to economically troubled regions of the U.S.

In exchange for investments of $500,000 in qualified projects, foreign investors can get legal U.S. residency under the EB-5 program.

The SEC alleged in April that Stenger and Quiros misappropriated hundreds of millions of dollars of investor money for spending on personal expenses for Quiros, among other things.

Stenger agreed to a settlement deal with the SEC earlier this month that bars him from ever participating in any EB-5-related business.

But none of the developments since April were apparent on the Jay Peak Resort web page entitled “EB-5 Visas.” The subtitle of the page, as of Thursday morning, was “Invest in growth and opportunity.” The page listed phone numbers for people involved with the EB-5 projects at Jay Peak, including Stenger himself.

“For foreign investors seeking the freedom and flexibility to live and work in the United States,” the web page said, “the EB-5 Visa Program provides an excellent opportunity to obtain Green Cards.”

Stenger answered a call to the phone number listed on the page, but said he wasn’t aware that the web page was still online until he was contacted by a VPR reporter. He said he would contact Jay Peak to let the resort’s staff know that the page should be taken down.

Stenger said he no longer has day-to-day control over the Jay Peak website, but refused further comment siting a provision in the SEC settlement that requires him not to comment in the press.

Jay Peak spokesman JJ Toland said in an email that the page wasn’t meant to be online.

Apparently, the web page stopped redirecting users to the informational page at some point, but Toland confirmed that the information was outdated and the resort is not soliciting any EB-5 investments.

“Bill is no longer the CEO of Jay Peak and we do not have an active EB-5 program,” Toland said.

Mike Pieciak, the commissioner of the Vermont Department of Financial Regulation, said he's confident the web page was an honest mistake by Jay Peak's new management.