How Will Vermont's AG Candidates Handle The EB-5 Cases? 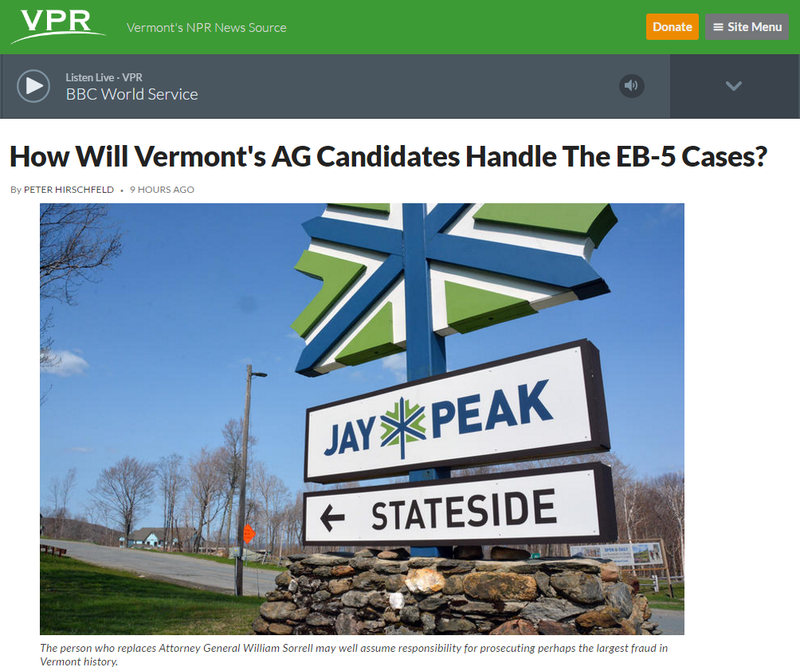 Vermont’s next attorney general will likely inherit one of the highest-profile civil cases in state history, and Republican Deb Bucknam and Democrat TJ Donovan say charges related to a $200 million EB-5 fraud in the Northeast Kingdom would be a priority for their administration.

On April 14, Attorney General William Sorrell unveiled a laundry list of charges against Ariel Quiros and Bill Stenger. The men are accused of using the federal EB-5 program to defraud foreign investors of $200 million, and Sorrell’s complaint details 15 alleged violations of the Vermont Uniform Securities Act and the Vermont Consumer Protection Act.

Sorrell, a nine-term Democrat, is not seeking reelection to his post; the person who replaces him may well assume responsibility for prosecuting perhaps the largest fraud in Vermont history.

“The EB-5 cases would certainly be a priority for my office,” Donovan says.

Donovan says he has no personal knowledge of the pending litigation. But he says he’d use a collaborative approach with state and federal authorities to pursue what he calls a “global resolution.”

"You've got to share information ... and I think that would be the hallmark of a Donovan administration." - TJ Donovan

Quiros and Stenger both face federal charges as well. Stenger has reached a settlement over those charges with the federal Securities and Exchange Commission. Sorrell, however, says settlement talks at the federal level have no bearing on charges filed in Vermont.

Bucknam says her preference would be to settle the cases, rather than go to trial.

“As with any lawsuit, if you can resolve it rather than spending money and time on litigation, that would be the best thing to do,” Bucknam says.

Bucknam says she’d also use the powers and resources of the office to figure out why the state didn’t catch the alleged fraud earlier.

“There’s nothing in any of this that indicates it wasn’t in plain sight,” Bucknam says. “The state could have easily, it seems to me, been monitoring this, and there were complaints back in 2010.”

"As with any lawsuit, if you can resolve it rather than spending money and time on litigation, that would be the best thing to do." - Deb Bucknam

State oversight of the EB-5 program was shifted to the Department of Financial Regulation after state regulators uncovered evidence of the fraud. Bucknam says she wants to make sure the new regulatory framework is rigorous enough to prevent similar lapses in the future.

Quiros and Stenger have thus far been charged only with civil violations, none of which carry the possibility of any jail time. Donovan says he doesn’t know enough about the case to say whether criminal charges are appropriate.

“Too early to say, but certainly everything’s on the table,” Donovan says.

Bucknam too says that she would consider criminal sanctions, but that it’s premature to say whether that’s an appropriate measure.