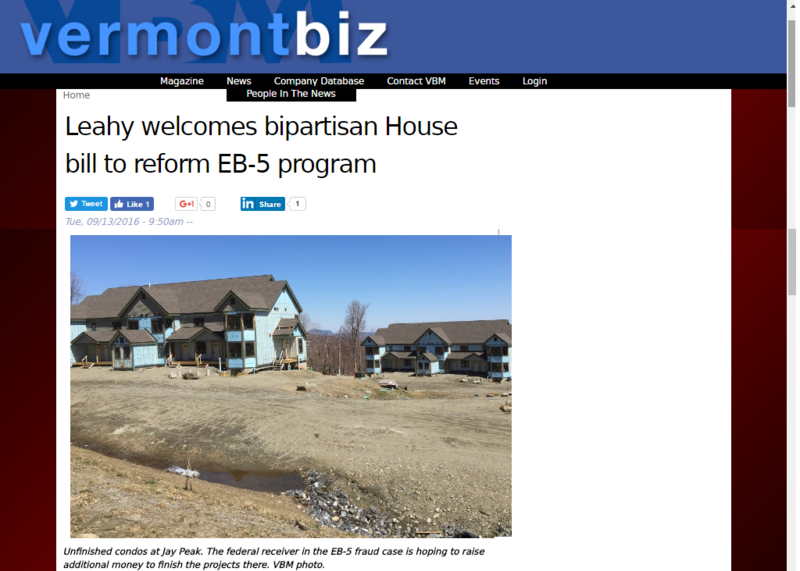 Senate Judiciary Committee Ranking Member Patrick Leahy (D-Vermont) issued the following comment Monday after House Judiciary Chairman Bob Goodlatte (R-VA) and Ranking Member John Conyers (D-MI) introduced legislation to reform and reauthorize the EB-5 Regional Center program, which is currently authorized through September. Vermont's EB-5 program is one of those around the country that has been burned by alleged fraud, in this case an alleged $200 million bilking of foreign investors involved with the Jay Peak, Burke Mountain and related projects in the NEK.

The legislation, HR 5992, the American Job Creation and Investment Promotion Reform Act, is a companion to legislation of the same name introduced last year (link is external) by Senator Leahy and Senate Judiciary Chairman Chuck Grassley (R-Iowa). The four leaders of the Judiciary Committees pressed to include these reforms as part of the omnibus appropriations bill last December, but their efforts were blocked by House and Senate leadership. Last week, Senators Leahy and Grassley wrote to Senate leadership (link is external) opposing any reauthorization of the EB-5 program that did not include broad and necessary reforms.

“Rampant fraud and abuse within the EB-5 Regional Center program prevents the program from serving its original purpose, which was to create jobs and direct capital to underserved areas starved for investment.  As I have said before, the program needs to be reformed or it needs to end.

“The bipartisan bill introduced in the House today represents good progress and reflects a proposal I developed with the leaders of the Senate and House Judiciary Committees last year, which was supported by the civil rights community.  Importantly, the House proposal includes additional reforms that I suggested to require transparency and promote accountability in the use of investor funds.  It ensures that investors and the Department of Homeland Security can better track investments and requires a third party to sign off on any expenditures.  The bill also provides protections for good faith investors who are defrauded, allowing them to adjust their investment without jeopardizing their immigration benefits.  I look forward to working with both the House and Senate to ensure that this program, if it is to continue, includes critical protections against fraud and abuse and serves the distressed areas that Congress intended.”

The EB-5 Regional Center Program permits a private or public entity to apply for designation as an approved regional center.  This designation allows the entity to propose development projects that foreign nationals can invest in who seek to immigrate to the United States.  Along with many other requirements that the investor must fulfill, the investor’s capital investment must result in the creation of 10 jobs.

United States Citizenship and Immigration Services (USCIS), the agency that administers the program, estimates that the EB-5 Regional Center Program has created tens of thousands of American jobs and attracted billions of dollars in investment in communities across the United States.