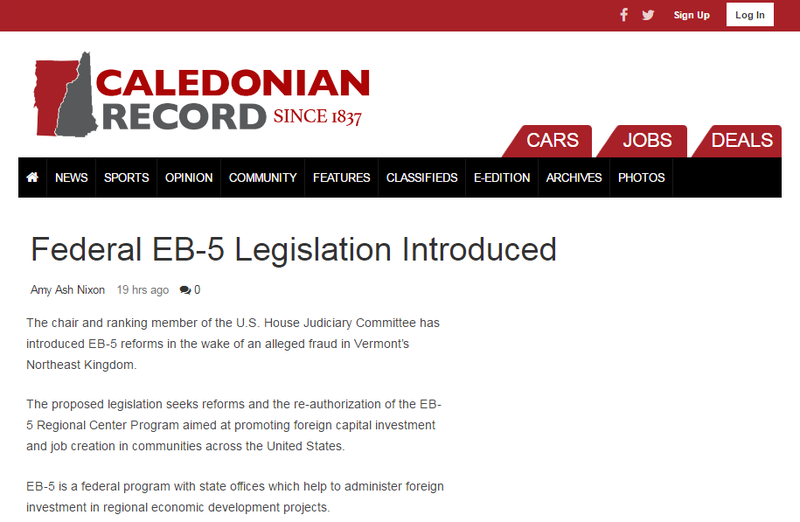 The chair and ranking member of the U.S. House Judiciary Committee has introduced EB-5 reforms in the wake of an alleged fraud in Vermont’s Northeast Kingdom.

The proposed legislation seeks reforms and the re-authorization of the EB-5 Regional Center Program aimed at promoting foreign capital investment and job creation in communities across the United States.

EB-5 is a federal program with state offices which help to administer foreign investment in regional economic development projects.

Sen. Patrick Leahy, D-Vermont, has pressed for reforms in light of the controversy that erupted in the NEK, when federal and state officials in April brought forth allegations of investor misappropriation of more than $200 million in regional EB-5 projects.

“Rampant fraud and abuse within the EB-5 Regional Center program prevents the program from serving its original purpose, which was to create jobs and direct capital to under-served areas starved for investment,” stated Leahy in the announcement about the draft reform legislation. “As I have said before, the program needs to be reformed or it needs to end.”

Leahy said, “Importantly, the House proposal includes additional reforms that I suggested to require transparency and promote accountability in the use of investor funds. It ensures that investors and the Department of Homeland Security can better track investments and requires a third party to sign off on any expenditures.”

“The bill also provides protections for good faith investors who are defrauded, allowing them to adjust their investment without jeopardizing their immigration benefits,” continued Leahy.

Leahy issued a statement to the press on Monday, after House Judiciary Chairman Bob Goodlatte (R-Va.) and Ranking Member John Conyers (D-Mich.) introduced legislation to reform and reauthorize the EB-5 Regional Center program, which is currently authorized through September.

In the case of the Northeast Kingdom Economic Development Initiative, immigrant investors paid $500,000 each, and their investments were expected to earn them permanent green cards once job creation or retention could be proven as required.

The allegations against Ariel Quiros and his business partner Bill Stenger, announced by federal and state authorities in April, has had state officials reeling with questions over why the state regulators were not on top of the problems sooner.

The projects Quiros and Stenger had raised more than $350 million in EB-5 investment for, mainly connected with Jay Peak and Burke Mountain Resorts, as well as for a bio-medical facility in Newport, were seized by the federal Securities Exchange Commission in mid-April. A federal receivership was brought in by a U.S. District Court to take control of the assets.

The pair stand accused of misappropriating more than $200 million in investor funds, and Quiros alone is further accused of taking $55 million for his own personal use.

Stenger is not accused of profiting personally from the diverted funds, the federal receiver says, and has been cooperating. Stenger recently agreed to a settlement with federal authorities and will assist authorities in their prosecution of his former business partner who is expected to stand trial in the case next year.

The bill would protect foreign investors who did nothing wrong, and laid down money in an EB-5 project which ends up being terminated, or running into noncompliance problems with the federal program that have nothing to do with the investors, the draft legislation shows.

Because some of the EB-5 projects in the Northeast Kingdom now part of the scandal have not come to fruition, or are not completed, the green card status of hundreds of investors is in jeopardy.

Federal receiver Michael Goldberg is advocating on behalf of those investors that they be held harmless from what happened, as are state officials in Vermont, urging federal immigration officials to honor the agreements made.