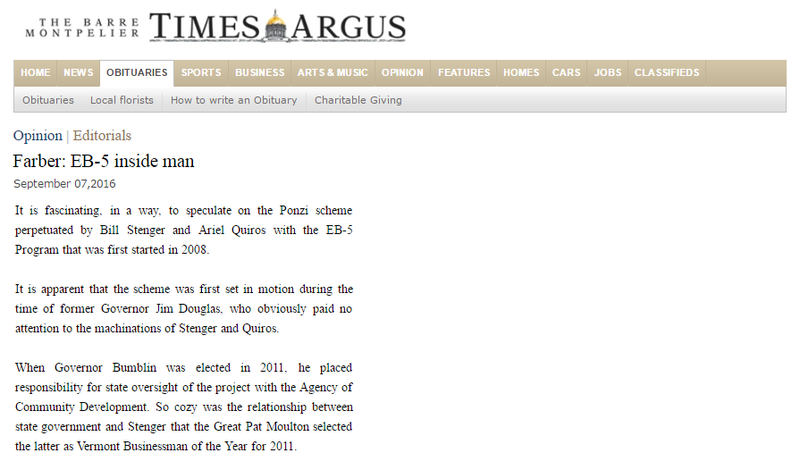 It is fascinating, in a way, to speculate on the Ponzi scheme perpetuated by Bill Stenger and Ariel Quiros with the EB-5 Program that was first started in 2008.

It is apparent that the scheme was first set in motion during the time of former Governor Jim Douglas, who obviously paid no attention to the machinations of Stenger and Quiros.

When Governor Bumblin was elected in 2011, he placed responsibility for state oversight of the project with the Agency of Community Development. So cozy was the relationship between state government and Stenger that the Great Pat Moulton selected the latter as Vermont Businessman of the Year for 2011.

We now know that Bumblin and Moulton were completely negligent in allowing Stenger to set up the Ponzi scheme while his confederate Quiros was the outside man who actually misappropriated the $200 million. Vermont under Attorney General Worthless Willie Sorrell then began an investigation of the entire affair after news broke in April 2016 that the SEC had brought charges against Stenger and Quiros.

It is laughable that Stenger proclaimed, after the charges were made public, that he had no knowledge of illegal activity. It is equally laughable that Sorrell did not, and will not investigate whether Bumblin and Moulton were guilty of anything more than turning a blind eye to the actions of their good friend Bill Stenger.

Sorrell in turn has served eight terms as the AG and has done nothing to protect the interests of the citizens of Vermont during that time. The Public Service Board under his direction has come down time and again on the side of big business and against the interests of the citizens of Vermont. The opioid overdose crisis developed on his watch and has now become a major problem that must be dealt with by the new attorney general and the new governor in January.

Unfortunately, the voters of Vermont have to bear some responsibility for all these problems by electing Sorrell to an incredible seven terms in office (and Bumblin three).

It is hoped that “innocent’ Bill Stenger will eventually get his just dessert and face criminal charges by the SEC. I appeal to the voters of Vermont to make up for past sins by voting for Phil Scott for governor and Deb Bucknam for AG in November. Their election would signal a sea change from the usual practice of the cozy relationship between the Legislature and the interests of big business.